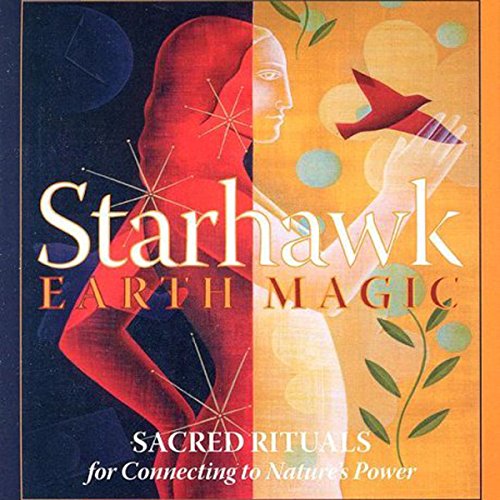 Best-selling author Starhawk has reached across barriers of skepticism and orthodoxy to initiate thousands into the practice of authentic magic, the ability to tap the ever-present enchantment of our world. On Earth Magic, listeners now have an unprecedented opportunity to hear this legendary figure in Wiccan and Pagan spirituality teach rituals for connecting to and channeling the elemental forces of nature. Starhawk imparts specific rites for drawing on the power of air, fire, earth, and water; celebrating sacred holidays such as the Solstice and the Equinox; and for giving gifts to the universe that return to us a hundred-fold.
©2006 Starhawk (P)2006 Sounds True

Foundational practice to get to know the earth, her magic and our place in her. Thank you Starhawk!

Starhawk presents meditations and ritual for connecting with the natural world with an easy voice, tone and manner. Story mixed with guided meditation, song and drum, this highly interactive writing had you experiencing, practicing, doing the work now!

The only negative thing I can say is that it had to end.

The knowledge transfer in history and comcepts of wicca is invaluable as it helps to understand the foundation and the purpose of the craft. Starhawk provides detailed information on reuniting with nature and learning inner harmony. This reading could have rated five stars if Starhawk hadn't awkwardly ad-libbed so many times.

this is great for wiccan/pagan inspiration. however the history at the beginning is just plain bad. everyone knows now that there was no universal, organized witch cult in Europe that survived to the modern age. we really have to start getting our facts straight if we want to be taken seriously.

Enjoyed it so much, I wrote a poem about it.

Before there was God,
There were goddesses.
Until Christianity buried her dead body
On the land.

Witches were burned
For trying to remember old ways.
And for healing with plants,
Witches were exterminated.
Everything in that history
Tells me to be Pagan.

In the 16th and 17th century,
The Church began
Persecuting witches.
The burning times.
Witches were seen as a demonic conspiracy of evil,
And were blamed for anything bad that happened.

Witches worshipped the moon goddess and the horn god,
In an old remnant of the historical gods and goddesses.
There were major peasant rebellions throughout this period,
And the witch persecution worked successfully
To fragment unity.

Traditional knowledge became denigrate and suspect.
People were feared if they believed they had access to the sacred.
Traditions of inner authority were seen as dangerous.
Independent women were targets.

Margaret Murray wrote “The Genesis of Religion”
Witchcraft was a continuation of the Pagans in Europe.
Witches were aspecting in transposession.
Letting the energy of the goddess or god take them over.

This a wonderful book full of all sorts of great information for any stage of practice. Thank you Starhawk!

Even with my hearing /neurological problems, this was soothing. She has a smooth, relaxing tone throughout, sometimes monotone, but only in a few spots.
It is very informative & a wonderful guide for anyone, not just Pagans/Wiccan to reconnect with Mother Earth h all she has to offer us.

a good primer for a newbee

short and sweet. Good for the explorer. good to listen to more than once because you need to go out in nature, it is ,5 below here!

Always love Starhawks books!!
I will definitely be buying the book too for easy reference.

I loved this audio, dispite being put off by what I thought might be Starhawk's over-emotional American style presentation. However, I was delighted to find this a very down to earth (!) and practical 'lecture' of her own pagan world view. This is a talk which makes so much sense when you consider what she has to say: we are of the Earth, and from her we take, and to her we must return, as part of the universal cycle of life. As creatures of the Earth, we are potentially wholly immersed in the magic of the world around us, and Starhawk shows us why and how we can tap into that magic for our own and for the planet's benefit. I gained so much from this Audible purchase, that I just know I will listen again, many times.

Great teachings from a great teacher.

This is a great audio-course. Starhawk's voice is engaging and warm. Her teachings mix politics, magic, gender, history, community ethics, biology and environmental science. Listening to her makes me want to be in nature and makes me feel more alive in nature. Check it out.

Brilliant, as expected, Starhawk really knows her subject and conveys her knowledge beautifully to the listener

I was disappointed to find that although this audiobook has many potentially interesting facets, the author cites too many references to gender politics and at one point uses the word history, then corrects it to 'herstory'. This is the type of silliness that peaked in the 70's/80's and has now matured and become mainstream. It has little relevance to the seeker of spirital truths in the here and now. I want to know how to further my spiritual development using pagan principles. I know it was very very wrong to burn witches who were mainly women, I know men have unfairly dominated many institutions through history. Whilst I'm broadly sympathetic to her grievances, I purchased the audiobook to learn about Earth Magic and should I wish to learn more about the history of gender politics, I will look elsewhere. I suspect that dominion rather than equality is what she really covets. There is also mention of green politics. This is also fine, but the book doesn't seem to credit it's readers/listeners with the intelligence to connect love of Mother Earth with behaving in a respectful manner towards her and voting for/participating in the parties who most reflect these views. The author makes the decision for the reader. This book should be renamed to reflect the political threads running through it. I now need a book on pure wiccan/pagan beliefs/traditions to fill the void left in my collection by this volume. Any recommendations?

I found this so Interesting, inspiring and educational. Really enjoyed listening - will seek out more work of Starhawk :)

Starhawk is a leader in the area. This is an inspiring and practical book read eloquently by the author. Highly recommended.

A bit too gender obsessed

I liked the part of this book which focused on the connection with the earth - I found this to be quite powerful. However the basis was a bit of a fantasy. The her-story notion was loaded with speculation that the once 'Matri-focal' (NOT matriarchal) society was some sort of feminine bliss (when women had all the power before nasty men corrupted us all) which I just couldn't buy into.

I liked her voice and pace.

Was Earth Magic worth the listening time?

Mostly. Not sure I want to worship the vulva.

There was too much open to logical questioning from the Alice in Wonderland gender-bias - which sort of defeats the point.

She just drones on and on and on.....Its hard to concentrate on what she is saying as you find your mind wondering off to anywhere else.