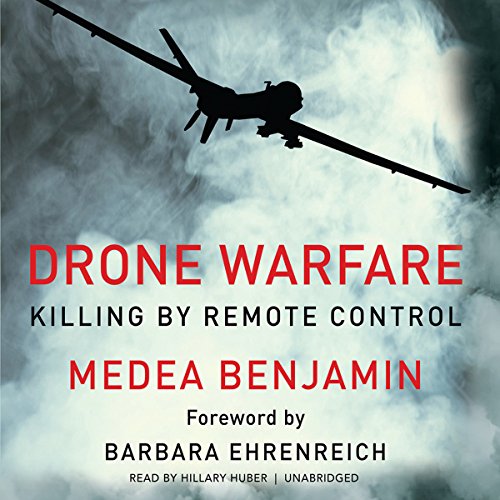 Weeks after the 2002 American invasion of Afghanistan, Medea Benjamin visited that country. There, on the ground, talking with victims of the strikes, she learned the reality behind the "precision bombs" on which US forces were becoming increasingly reliant. Now, with the use of drones escalating at a meteoric pace, Benjamin has written this book as a call to action: "It is meant to wake a sleeping public lulled into thinking that drones are good, that targeted killings are making us safer."

Drone Warfare is a comprehensive look at the growing menace of robotic warfare, with an extensive analysis of who is producing the drones, where they are being used, who "pilots" these unmanned planes, who the victims are, and what the legal and moral implications are. In a vivid, accessible style, the book also looks at what activists, lawyers, and scientists are doing to ground the drones and considers ways to move forward. In reality, writes Benjamin, the assassinations we are carrying out via drones will come back to haunt us when others start doing the same thing - to us.

Medea Benjamin is a cofounder of the peace group CODEPINK and the international human rights organization Global Exchange. She has been an advocate for social justice for more than 30 years. A former economist and nutritionist with the United Nations and World Health Organization, she is also the author-editor of eight books. Her articles appear regularly in such publications as The Huffington Post and OpEd News.

©2012 Medea Benjamin (P)2012 Blackstone
Politica e governo
Mostra di più Mostra meno
"In this remarkably cogent and carefully researched book, Medea Benjamin makes it clear that drones are not just another high-tech military trinket. Drone Warfare sketches out the nightmare possibilities posed by this insane proliferation." (Barbara Ehrenreich)
"Activist extraordinaire Medea Benjamin has documented how the US government's use of drones to murder hundreds of innocent civilians in Afghanistan, Pakistan, Somalia, and Yemen has increased the danger to our national security. Benjamin's Drone Warfare is the first book that reveals the vocal international citizen opposition that challenges the legality and morality of America's extrajudicial execution drones before they kill here at home." (Ann Wright, US Army colonel [Ret.])

A sad case of ignorance

Sadly, the author has overlooked several germane facts in her attempt to tell a story of woe is the warrior. While highlighting collateral damage and unnecessary roughness on the modern field of combat, which is not unique to drones, by the way... the book utterly ignores the effects of bad guys on the lives who were innocently affected. In a tone that reminds me of those who spat upon soldiers returning from Vietnam, the author indicts those who use warfare to protect the innocent. The truth is, war is not innocent, but it is necessary. No one has done more to protect innocent lives than the U.S.A. and its rules of engagement of enemy combatants. We regret that innocent lives are affected, and often we compensate for their loss. Yet, while highlighting the tragedy of mis-calculation on the part of humans, mere mortals that comprise the American fighting force, Ms. Benjamin seems to be ignorant of the fact that terrorist groups such as ISIS draw out the "Sheepdog" response of a country that promotes opportunity for all. It was not the U.S. that burned a Jordanian pilot alive, or beheaded and otherwise killed innocent humans by the hundreds. We have engaged them though, and they will be held accountable. If it is possible, consideration for collateral damage will be made. As an example when we don't use a 1000 pound bomb to take out an entire city block, but rather send in a team soldiers, at their peril, often to be wounded or killed, so that innocent lives are spared. This behavior has been sadly left out of a one sided diatribe intended to denounce the means by which modern war is waged. The book is unworthy to be read by anyone in my opinion.

Has Drone Warfare turned you off from other books in this genre?

This is not a genre, it is an abomination.

Who would you have cast as narrator instead of Hillary Huber?

Hillary did her job, she vocalized the intents of a misguided author.

Disgust. I recommend pulling it from the Audible offerings.

Would you try another book from Medea Benjamin and/or Hillary Huber?

Nope. Based on this book, I can't imagine any other book to be worth it. So no.

Would you ever listen to anything by Medea Benjamin again?

Would you be willing to try another one of Hillary Huber’s performances?

Can I have my money back?

The Future of War and the End of Privacy

Out of a concern about objectivity, I would not have bought this book if I knew beforehand that the author is a prominent left wing activist. I am very pleased to have listened to this audiobook.

The book describes the use of drones in war as killing and surveillance platforms. Considerable detail is given about the types of drones that exist or are in planning stages. Civilian use is described where drones are used or a growing number of purposes from patrolling borders to fighting forest fires.

The author then presents a long list of negative factors in the use of drones.

The chief concern is that they are proliferating at an exponential pace. Other countries and non-state entities, including terrorists, are acquiring them. The use of drones is being explored at national, state, and municipal levels.

Drones malfunction and operators are prone to error. This can lead to the killing or maiming of civilians.

Medea Benjamin devotes much of the book to legal and moral concerns associated with the use of drones. These are too numerous and complex to summarize in a review but they are well reasoned, researched, and presented. Whether you agree with Benjamin or not, you should be aware of these issues. Drones will have an increasing worldwide role in the coming years.

A good book ruined by a terrible narrator. Surely it deserves better. Huber sounds like an early speech synthesiser.