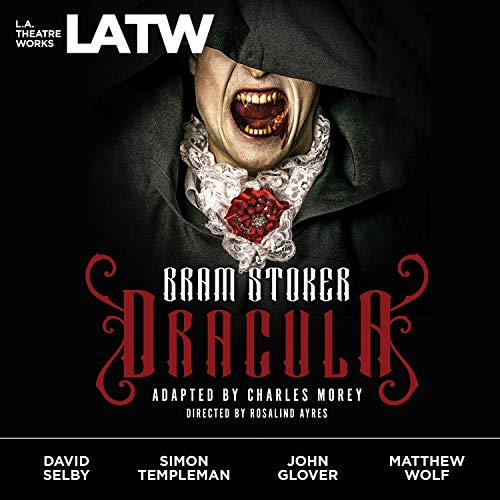 Before Twilight and True Blood, only one vampire commanded “the children of the night". In this bloodthirsty tale of unholy terror, Count Dracula slips into Victorian London with a cargo of his native Transylvanian soil - so he can rest between victims. The city seems helpless against his frightful power, and only one man, Dr. Van Helsing, can stop the carnage. But to do this, he must uncover the vampire’s lair and pierce his heart with a wooden stake.

Recorded in Los Angeles before a live audience at the Skirball Cultural Center in May 2011.

I'm at a play with my eyes closed

If you could sum up Dracula (Dramatized) in three words, what would they be?

Differentiating the characters and their personalities is very easy

What other book might you compare Dracula (Dramatized) to and why?

Dracula will always be the origin of The Twilight Series

Not yet but I just may try it out. I enjoyed listening to this version of the story

It definitely kept my attention and the background noise really did make it seem like I was backstage at a play. Nice work.

A good dramatization of a timeless classic. Fun to listen to.

This whole production is absolutely stunning! Such beautiful performances are given by all, Lisa O’Hare in particular in the role of Mina. Even the underscoring is perfectly done! I would very highly recommend this audiobook to any and all of my fellow horror lovers, as well as to anyone looking for something on the spooky side!