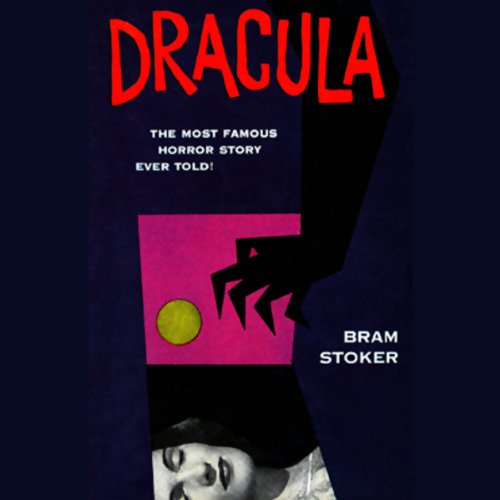 In 1897, at the age of 50, Bram Stoker was touring manager to the actor Henry Irving and was enjoying a modest success as a journalist and writer. Publication in that year of Dracula was to bring him international and lasting fame.

The Dracula mythology has inspired a vast subculture, but the story has never been better told than by Stoker. He succeeds entirely in his aim to terrify. His myth is powerful because it allows evil to remain mysterious. Virtuous action has no more impact than Jonathan Harker's shovel. The high virtue of Lucy can simply be drained away, as her blood is drained away, until she too joins the vampire brood. Van Helsing's high-thinking and scientific skill cannot resist the dreadful potency of the undead. Only the old magic, a crucifix, garlic, a wooden stake, can provide effective weapons against the Count's appalling power.

"The world's best-known vampire story comes to life in this expert performance by Robert Whitfield.... For a classic performance of a classic work, this production must not be missed." (AudioFile)

I've been listening to many of the classics I should have read in high school and college, but somehow missed. Dracula is one of them. I didn't think I would enjoy it as much as I did. I really liked how the novel was a compilation of diary and journal entries, memoranda, and newspaper articles. Bram Stoker's writing and description of the Count and his castle and the evil that surrounded them is chilling even today.

A wonderful reading of the vampire classic

I've re-read Dracula many times over the years and always enjoyed it, so I was delighted to find that one of my favorite audiobook readers had done an unabridged version. Listening to it was a new experience, as so many small details become noticeable when heard, and I became more aware of the structure of the story than I had been before. While Van Helsing's broken English was sometimes more funny than Stoker may have intended, overall I thought all of the characterizations held up well, and despite knowing the story backwards and forwards I found myself getting teary once or twice. Definitely recommended!

I never envisioned myself looking at Victorian literature with much enthusiasm. But I was very glad so many people pointed me toward Bram Stoker's Dracula. I normally am unmoved by vampire stories, but loved Salems Lot by Stephen King, so I thought I'd get to the origin of all vampire lore by hearing this classic.

The voice acting was incredible. Robert Whitfield, who narrates, does such an incredible job of portraying all of the characters with such adroit voicing that I was enthralled into the story in a way that reading it to myself would have been lacking. Much as Shakespear's plays are very trivial when read to one's self, but become unrivaled triumphs when well-acted (and conversely disastrous when poorly-acted), this audiobook lived and breathed.

I cannot emphasize how amazing this book is and how well it performs. This will be a story I will listen to time and again. Bravo!

Dracula has always been one of my favorite novels. If you've already read the novel and are looking for a good audio version, I recommend this one. The characters really come to life with the narration. If you're a fan of Dracula/vampire films and are looking for a similar book, remember Dracula was published in 1897. This is every bit a Victorian novel, and is thoroughly imbued with the sensibilities, language, and sociology of the period. If you're looking for action, blood, and rip-roaring carnage, this is not the place to find it.

The Dead Travel Fast. The Quinary Count No. 4

I recently undertook the personal challenge to listen to five different versions of DRACULA because listening to Bram Stoker’s classic years ago made me a fan of audiobooks. I enjoyed that experience so much that I decided to try to determine if I had just gotten lucky or if there was an even better version available. Besides, I wanted to listen to it again. With most books I feel fortunate to have just one audio version available, but with DRACULA there are so many versions offered that listening to them all is not practical. I first figured that I could handle maybe three different versions but then discovered two more that I thought deserved attention. The Audible list had these five that I thought might be contenders:

Review for this version:

This is the Blackstone Edition read by Robert Whitfield, better known in the audiobook world as Simon Vance. His is the most speedy version, and by more than four hours compared to the longer versions! And this is not because any of the text has been cut out. This is the complete novel. Listened to by itself this might not be a factor but when directly compared to the other versions it seems hurried, almost as if he is intentionally rushing things in order to minimize the run time. For me, the rapid pace did not suit the material well. This is a gothic horror novel and as such the slow building of dread and deliberate mood building are key elements.
Compare this version to the Audible Edition where the same narrator, as Simon Vance, portrays Jonathan Harker. The two renditions of the Jonathan Harker material seem to be read by two different actors. This demonstrates the range of the narrator. Whitfield's diction is impeccable and is always very clear and easy to follow. He is a fine sight reader. In the early chapters his accent for Count Dracula seemed to be changing from one scene to the next, but once he hits his stride the narrator became transparent.
Throughout the course of the listening to the five versions, this solo performance of Whitfield continually gained in favor. On one occasion I failed to notice the chapter break while listening to this version and continued well into the next chapter; thus proving that one can become immersed in the story with this version.

TECHNICAL NOTES
Chapter stops match book chapter numbers.
00:00:19 Includes the dedication, “To my dear friend Hommy Beg;” the only version to do so. Also includes the brief introduction: “How these papers have been placed in sequence will be made clear in the reading of them…”
4:21:51 (Repeated phrase) "did not have full opportunity of examination as I should wish."
4:30:00 (Correct word use) “madmans” (TAD p. 111.3.10). This is the only version that uses a word here that in found in one of the print versions. The other versions use “madmen,” or “madmens,” which do not find textual support.
10”38:00 (Repeated phrase) “as though overhead some dread bell would peel out powerfully.”
9:56:10 Mispronunciation of “sentience.” (as SEN-t-ence)

A great reading of a great book

One of my favorite books. Of course, your mileage may vary on that point, but I just wanted to say that I tried out a couple different audio versions of Dracula, and this one is simply outstanding.

With a highly mood-focused book such as this, the voice reading it can really make or break the presentation -- kudos on this version!

story telling at it's best. even by contemporary standards the story stands the test of time. a must 'audible read'

This is my all time favorite book. I have read and re-read this book. It's like an old friend so I was hesitant to get an Audible copy. However, Robert Whitfield's narration of this book is stunning. His characterizations are superb. This is a wonderful listen. It brings the book to life in a new way for me.

One of the best books I've listened to! The narrator pulls you into the story until you feel you are there, watching the terrifying events unfold. His changing voices with each character are so smooth that you see & hear each person as they give their accounts & impressions of Count Dracula. The horror is facinating! Truly a pleasure!

The narrator did an excellent job at capturing the Gothic sentimentality of the characters. His interpretations of Stoker's prose and dialogue was just the right mood for the novel. As for the novel itself, there's no point in reviewing it. It's Dracula. Enough said.

Dracula is, of course, a classic horror/fantasy novel. As a younger person I tried to read this book, but my imagination was too good and I couldn't finish it, it was too scary! As a much older person I was able to listen to it and enjoyed it too!!! I was completely asbsorbed by the story and was always keen to listen to the next installment (whilst gardening!). The reader , Robert Whitfield, was excellent and easy to listen to, which is important especially with a long book. Definitely recommend.