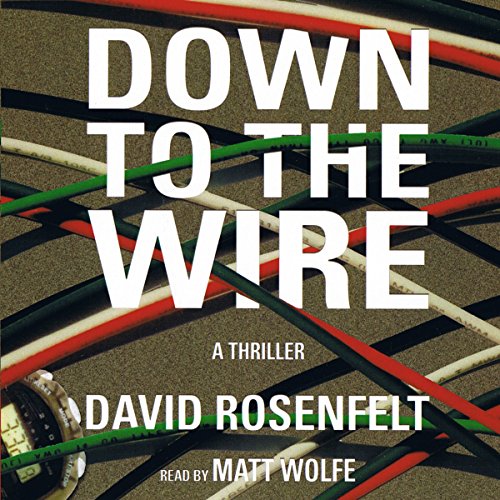 As a small-town reporter for the Bergen News, Chris Turley could never measure up to his father, Edward - one of the last great investigative journalists. With his father's legend ever-present, Chris dreams of his own Pulitzer, as he bides his time covering press conferences and town hall meetings. Then one day his fortunes turn.

While waiting to interview a source, Chris witnesses the explosion of a nearby office building and is thrust into action rescuing five people from near-certain death. His firsthand account in the next day's newspaper makes him an instant hero and a celebrity. And that's not all. The source's next tip leads to a second headline-grabbing story.

Suddenly, Chris' career is looking a lot more like his father's. But what seemed like a reporter's dream quickly becomes an inescapable nightmare. This anonymous source has had a plan for Chris all along, and his fortune for being in the right place at the right time is not a coincidence at all.

Down to the Wire, David Rosenflet's shocking new thriller about an ordinary man who gets exactly what he's always wanted at a price he can never pay, is an intense thrill ride that will keep listeners from wanting to press pause right up to the end.

“High-voltage entertainment from an author who plots and writes with verve and wit....Plot twists and red herrings abound, and Rosenfelt ratchets up tension with the precision of a skilled auto mechanic wielding a torque wrench.” ( Booklist)

Cosa pensano gli ascoltatori di Down to the Wire

I wasn't sure I'd like this. I really like the Andy Carpenter books, and I wasn't sure I would like a less flippant, more serious character. I did! The story is a little weak in parts, but what makes this book a good purchase is the narrator. Wow!!!! I had to remind myself that this was only one person reading. I liked the story, I liked the characters, and I really liked the narrator. I look forward to the next David Rosenfelt book.

David is among my top authors. He manages to always spin a good yarn that is both an easy listen & frought with many twists & turns. I can always count on a easy listen to a very good story when I listen to a Rosenfelt Audio Book, Down to the Wire is no exception. I highly recomend it. You too may begin to follow fun David. John t. Wagner

Having just finished the Andy Carpenter series of books I was looking for some more similar entertainment. I should have paid attention to the one very negative review - it is really hard to believe this is written by the same author! The plot is shallow, the characters are unlikeable and not believable, and the narrator probably made it all worse with stagey bad guy voices that sounded the same as old lady voices. There is no humor in this book either.

This book is very different from the "dog" stories and frankly I enjoy those more. The writing is smart and funny - the ending was a bit disappointing as I don't think the reasoning of the bad actors was fully explored. I figured out "whodunit" a little too soon for my reading pleasure. All in all, worth the credit (1) but if you haven't read the author's work before check out those dog books - they are hilarious and engaging.

Slow starter but catches up quickly

This was a bit different from other Rosenfelt books. His normal sarcastic writing style was missing. It started a bit slow but came on quickly. I throughly enjoyed the narrator and was entertained throughout.

What a terrific ride

You will be sure you have it figured out ... many times. So many twists and turns to keep you glued to your player ... enjoy this fantastic book.

Not as Good But Still Worth the Read

As others have said, this book is not as good as the Andy Carpenter series, but it is still a good "listen." David Rosenfelt writes an easy-listen. The stories are not deep, full of controversial topics. But they do entertain. This book is no exception. The story takes a good twist shortly into it that keeps you on the edge.

I thoroughly enjoyed this book. Mr. Rosenfelt definitely knows how to entertain and get you absorbed in his books. I always tend to place myself in the shoes of the main character and travel with them through the book. This was a nice break from the Andy Carpenter series but I am such a huge fan of the Carpenter series I have listened to most of the series twice. I find myself totally entertained by anything that Mr. Rosenfelt writes. You can't go wrong with any of his writings.

I am a fan of David Resenfelt's book series about Andy Carpenter and his dogs.I think they are clever and entertaining. This book is so predictable, unclever, and unentertaining, that I can't believe the same person wrote it. I would like to think he didn't, because it makes me reluctant to download any more David Rosenfelt books. How does something like this get published?

I am such a fan of his books, but was reluctant to get this one because I love the Andy Carpenter series with Gardner's narration. Therefore I was pleasantly surprised to hear Rosenfelt's incredible wit come through in this. Great job by one and all.