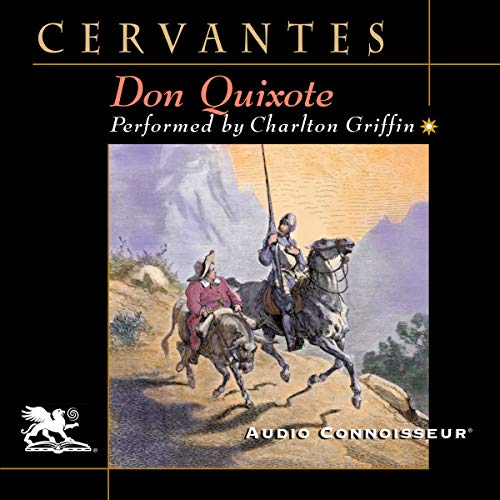 Don Quixote is widely considered to be the first modern novel. As a classic of Western literature, it is regarded by scholars worldwide to be one of the finest works of fiction ever written, and a magnificent product of the Spanish Golden Age of literature. Cervantes’ influence on the Spanish language has been so great that his work is often called “la lengua de Cervantes.” The work was written in two separate volumes, both of which are contained in this production. It introduces the character of Don Quixote de la Mancha, a hero who carries his enthusiasm and self-deception to unintentional and comic ends. He is paired with a comic character of opposite qualities, Sancho Panza, a peasant who is a compound of grossness and simplicity. Volume Two is generally conceded to be the funniest part of the novel.

Don Quixote himself represents the faded glory of Spain’s medieval past in all its grandeur…and its superstitious nonsense. Sancho Panza, on the other hand, represents the common sense of the Spanish peasant whose view of reality may be hilariously comical in its ignorance, yet reflects the stern conditions of practical life. The average peasant has little use for the legends of medieval knights. The tension between Don Quixote and Sancho Panza sustains the comedy and provides the basis for the highly sophisticated philosophical discussions between the two, and between them and the other characters who wander in and out of the tales. Don Quixote of La Mancha is a masterpiece worthy of serious contemplation, and of being eagerly and repeatedly enjoyed.

This version of Don Quixote was translated by John Ormsby.

A wonderful reading of one of the greats

Charlton Griffin does a fabulous job of bringing this incredible tale to life. Five stars!

While this book is undoubtedly a classic, certainly clever, and an interesting and accessible impression of certain parts of C17th society, there is no escaping that this book is basically Dumb and Dumber. The slapstick and awkward situations slightly lessened my enjoyment. Although I should really have expected it.

The repeated callbacks to the author of the unofficial Don Quixote book were fun. This is an interesting translation, although the olde world language could make it a little trying during the less gripping moments. The narrator's sardonic delivery was great. I have to disagree with his pronunciation of gyrfalcon though.