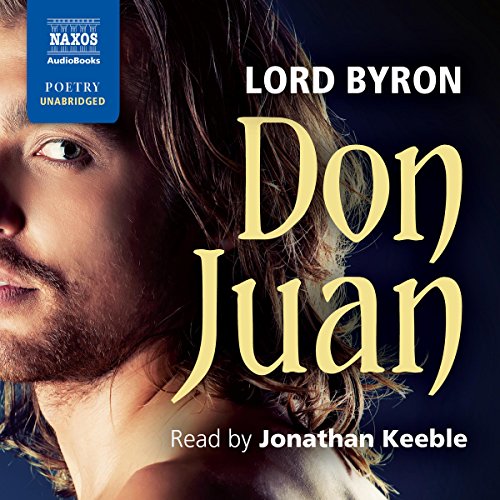 Lord Byron's satirical take on the legend of Don Juan is a moving and witty poem that sees the young hero in a reversal of roles. Juan sheds his image as a womanizer and instead becomes the victim of circumstance as he is relentlessly pursued by every woman he meets. Comprising 17 cantos of rhyming iambic pentameter, the poem is a crisp and accessible meditation on the madness of the world.

The Impertinence of Being Earnest

In some ways, Jonathan Keeble's new recording of Byron's "Don Juan" is far and away the best on Audible, being quite free from such impediments of timbre, mannerism, and affectation as detract from the earlier versions by Robert Bethune, Frederick Davidson, and Charlton Griffin. Keeble is a superbly accomplished narrator, in complete command of his vocal instrument and of the tonal effects he wants to achieve with it in every passage, line, pause, and syllable. He knows (or thinks he knows) what complex of effects Byron aims at in every moment of the text, calculates every nuance of his performance accordingly, and realizes those effects with pinpoint accuracy.

Just one problem: his notion of the effects Byron is trying to achieve is spectacularly wrong-headed.

It's true, of course, that Byron employs a rich palette of tones over the more-than-sixteen-canto span of his masterpiece. But the keynote tone of the whole is this: the poem is funny. Setting aside the humorous parts of "The Canterbury Tales," it is unquestionably the outstanding comic poem in English. Its satire may sometimes drip with sneering disdain or thunder with prophetic wrath (Keeble does these very well), but mostly it is undisguised, exuberant, sophisticated wit that finds the poet insouciantly skewering innumerable puffed-up solemnities we can hardly believe anyone has ever taken seriously.

Yet Keeble seems unaware of this. One might think he supposed himself to be narrating, not the ribald misadventures of Don Juan, but the solemn mopings and meanderings of Childe Harold. The keynote tone of this audiobook is stern, solemn, grim, with only faint shadows of lightness of touch. Sometimes, as in the shipwreck episode, this approach is perfectly correct. But most often, Keeble's earnest tone is simply not pertinent to the jaunty self-projection of Byron's stinging barbs, and it is impertinent, too, therefore, in that it disrespects the sustained and scintillating levity that Byron so deliciously achieved.

Given all this, a rating for this book is hard to settle on. On its own terms, I must admit, it is magnificently done, and I did enjoy listening to it, but in a quite different way than I enjoyed Bethune despite his pinched nasality, Davidson despite his cloying preciousness, and Griffin despite his elaborately assumed pseudo-British persona. If those other versions manage to capture the poet's comic achievement only imperfectly, Keeble's stands in one way as definitive--but definitive for a Bizarro world in which Byron's work is predominantly a triumph of straightfaced gravity rather than vivacity of wit. Should you spend a credit on it? After listening to the samples, I guess you pays your money and you takes your choice. But for a notion of how "Don Juan" ought to be done, listen to the free online recordings of selected cantos by Peter Gallagher. In the meantime, despite Keeble's narratorial virtuosity, I think your best bet is Charlton Griffin.

A Note to Lord Byron

George, you were a poet, though no laureate;
Yet we remember you instead of half
The names that graced the place where Southey sat.
Is it because you trashed ‘em with a laugh
And sided with the proletariat?
Titled yourself, you’re like some rogue giraffe
Entered in a steeplechase: Unique
Long before the radical was chic.

You’re funny in both senses of the term;
On goings-on in boudoirs you’re incisive.
Meditating on the busy worm
You’re no less pithy. Yet you are derisive
Of all religion, and thus refuse the firm
Perspective that a little faith might give.
Had you believed in Father, Son and Spirit
You might’ve been more happy. Or more near it.

The times were stacked against that; you’re Romantic.
Fleeing from the measured marble halls
Enlightenment had built, you all went frantic
For shady glens, ruins, waterfalls,
And inmost feelings, even if somewhat antic.
Seeing your headlong rush is what appalls:
Not satisfied as sybarite, you mix
In moral sermons on war and politics.

Did I say appall? I’m also thankful,
Delighting in the way you turn a phrase,
Describing seashore, moon, or well-turned ankle.
Your wanton wit illuminates my ways,
Though your pontifications sometimes rankle.
Odd. I started out in hopes to praise
Your poem. I will. It’s just the way you preen;
At thirty you sound like me at seventeen.

I’m not saying the Regent wasn’t fat,
Or Ireland was happy. When you insist
That war and glory require a caveat
Emptor for the ones who would enlist,
I concur. Most poetry falls flat,
Most men are knaves, all governments resist
Pure reason. But your charge sheet of contempt’s
So generous there’s nothing it exempts.

With Wellington I think you were unfair,
Painting him a monster steeped in blood.
I recognize the literate ruse de guerre,
And yet no other British general could
Be stingier with the blood under his care
(Though of his enemy’s he made a flood).
But did you know he said, when all was done,
Sadder than battles lost are battles won?

You hated him for re-establishing
Crowns the levee en masse had put to route.
You saw the dawn of every man a king,
Or thought you did. A pretty thought, no doubt,
And one that does you credit, remembering
That that’s a plan that’s never yet worked out.
Alas, when you fulminate I fear I see
That, like Voltaire, you’d force us to be free.

I must be fair. Some later cantos shun
The aristocracy we make with votes,
(Our last administration brought a gun
To knife fights and kept boots on certain throats.)
You vary in your sympathies. Not one
Is there for long enough to set in quotes.
Still, it’s sweet to hear a Liberal waxing
Wroth against all government and taxing.

Enough of that. Everyone has seen
Your Juan is a masterpiece, although
Like Canterbury Tales or Faerie Queene
Unfinished, to which fact I think you owe
Some of its charms. We say, “What could have been?”
We speculate, “How old would young Don grow?
On this side of the cold, deep, grey Atlantic
Even Yankees wax somewhat Romantic.

Wallace Stevens said a poem must give
Pleasure, and your epic surely does
In heaping measure. Juan seems to live
As do his loves and enemies because
Of your adroit (and barbed) recitative
That scorns all social (and poetic) laws,
All hypocrites (and saints). Your keenest skewers
Are saved up for reviews. And for reviewers.

True, you admit you’re not always compelling;
No grand design is driving each new stanza;
And yet we follow, where’er your sail is swelling
Like Ruth’s Naomi, or Don Quixote’s Panza.
Opining, indicting, and sometimes even telling
The story, you scud onward, granted sans a
Compass, sextant, anchor or even crew.
For sure our captain’s crazy. But what a view.

A “versified aroura borealis”
Was your description of this wandering tale.
As usual, the image is not amiss:
Brilliant sheets of color that flood, then fail
And failing make us crave more, like a kiss
Just ended. Or an empty glass of ale.
(Forgive me this poetic ‘sault and battery;
Imitation’s still the highest flattery.)

And what of our dear reader, Mr. Keeble?
Given his last name it would be easy
To rhyme him with pejoratives like “feeble”
But telling untruths always makes me queasy.
He’s perfect, like your poem. Unlike a Weeble
He never wobbles, falls down, or is cheesy
Or fluffs a line, though reading it out loud.
I’m certain George, Lord Byron, you’d be proud.

A note to the pronunciation police

For all of those commenters who fussed about the "Don Joo-an" pronunciation, please note that that is how the name is pronounced in British English. The narrator was absolutely correct.

This constantly amusing and eloquent story, probably the greatest book-length poem in English, is a pure delight, always entertaining. The author speaks right to the reader, joking and showing off his erudition while telling a great, episodic story. Don Juan (pronounced in the British way as "Don Joo-an," or sometimes by Bryon, "Jooney,") is not the sexual predator of other versions of the story but a rather sweet, hapless young man whom women, young and old, coarse and aristocratic, can't keep their hands off of. Lots of swashbuckling adventures, pirates, shipwrecks along the way, with the author's many digressions from the story as entertaining as the action.
The reader, Jonathan Keeble, is terrific, a wonderful ham, perfect for the material.

What did you love best about Don Juan?

Keeble's narration is absolutely brilliant. And contrary to a previous review which holds that Keeble's approach to the great poem is too serious, to my ears his ironic tongue remains fixed in his cheek throughout. This is the sort of performance that could turn the most dedicated metrophobe into a lover of the Romantic poets..

Listened for School and was wonderfully surprised

If you could sum up Don Juan in three words, what would they be?

It's a poem (which I hate) is disguised as a narrative story.

What does Jonathan Keeble bring to the story that you wouldn’t experience if you just read the book?

He brought out the humor that just reading did not. He's voice and pacing was perfect.

Keeble does an unbelievable job here. This is the closest any english writer has come to Cervantes. Incredible it is little taught in America or the UK. Benita Eisler has a wonderful biography which is a great companion. I can't imagine a better reading.

Enjoyed this very much. Keeble’s performance brought out the comic, satirical elements of the epic brilliantly.

Byron's work is beautiful and the narrator does a good job except for his bothersome usage of Js. Juan is not pronounced Jewuan it's Huan. Jose is not Joesey it's hosey.

It's pronounced Wuan not Jew-on

I think that when someone reads the book out loud they should know how to pronounce the names of the characters. Especially the main character! You could maybe forgive it on some of the other characters but the main character??? I had to figure out who this "Jew-on" was. Jew-on, Jew-on, who the hell is Jew-on??? Oh he means Juan. This killed it for me!

I think the performer should know how to pronounce the name of the characters. Especially the main character!

What made the experience of listening to Don Juan the most enjoyable?

The poem comes alive and I had the sensation of having Byron in my room chatting with me.
A great work and a marvelous reading.
I laughed out loud a lot. Thoroughly recommended.

Good eading of an epic.

It can feel like a bit of slog to get though due to iit's length, but worth the effort to get to grips with one of Lord Byron"s greats.

It's not going to easy to get through the lot. The audio book has been split into each canto so every chapter is very long which makes it hard work too.

Byron tells an epic tale here with his trademark wit and asides galore to poke fun at his contemporaries, those that definately needed lampooning.

it's great work done justice by the reader. High quality recording and a work that holds up surprisingly well over the centuries. Who new rhyming iambic pentamiter could.be so much fun?