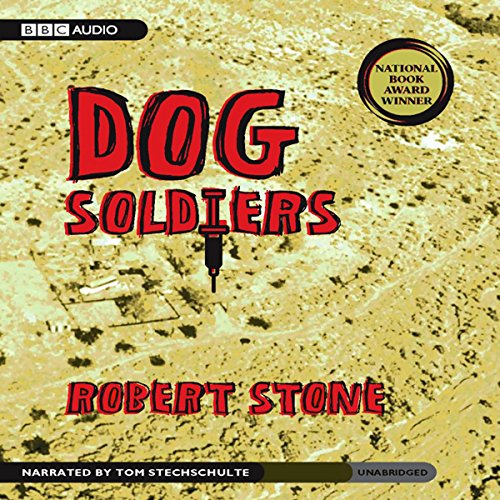 In Saigon during the waning days of the Vietnam War, a small-time journalist named John Converse thinks he'll find action - and profit - by getting involved in a big-time drug deal. But back in the States, things go horribly wrong for him. Dog Soldiers perfectly captures the underground mood of America in the 1970s, when amateur drug dealers and hippies encountered profiteering cops and professional killers - and the price of survival was dangerously high.
©1973, 1974, 1994 Robert Stone (P)2008 BBC Audiobooks America

"A dark descendant of Conrad's and Hemingway's adventure stories...Goes hell-for-leather across the landscape." (The New York Times Book Review)

John Converse was once a successful playwright. But his ideas dried up and he found himself working as a correspondent during the Vietnam War. But, even at this job, inspiration escaped him. So, he decided to smuggle heroin into the United States, enlisting his old friend Ray Hicks to transport the drugs to his wife Marge in California.

Things go terribly wrong. The bad guys learn about the drugs and try to steal them. They threaten Hicks and Marge; then, kidnap Converse. Hicks and Marge go on the run, trying to find a way to sell their product and escape their pursuers.

"Dog Soldiers" by Robert Stone is a thriller with a suspenseful buildup and an exciting climax. But it is also a commentary on the cynicism that swept America after the idealism of the 1960s counterculture. American soldiers are selling narcotics, cops are corrupt, and young people are bored with LSD and trying more dangerous drugs.

Stone intersperses the action with philosophical musings via the inner dialogue of each character. There are moments of humor, of reflection, and of fear.

The thoughts of one character as he slowly dies while trying to escape through the desert is particularly poignant.

"Dog Soldiers" won the 1975 National Book Award. It is not a classic, but it is an exciting and well-written novel, with enough ideas to exercise your brain.

intense narrative of a dark and complex time

Would you consider the audio edition of Dog Soldiers to be better than the print version?

I have not read the print version.

the subtleties of the characterizations

If you could rename Dog Soldiers, what would you call it?

I would not rename it. This is a silly request in my opinion.

dull and painful and depressing

This book is well read and has a superficially plausible plot. It was good enough that I managed to listen through to the bitter end, but that's the best I can say for it. A tale of a not-very-bright journalist's foray into the drug business, the story never becomes believable or engaging. We have deep exploration into the human psyche. We have page after page of slow, unredeeming death. The book is dull and painful and depressing - Conrad without the magic.

An hour and a half into this, I give up. No Mas. Maybe it is me, but I just can't follos it.

Loved the story it was hard to put down. The narrator does an amazing job. Highly recommend!

A bitter disappointment of a book

I went to see the movie based on this book, starring Nick Nolte as the " hero" of the story and Michael Moriarty, as the weakling writer;it was, overall, a very good film and with Nolte's most striking role.

So, I was hoping for great things, when I tracked down the source; great reviews, trumpeting the excellence of the book, only increased the crashing nature of my disappointment.

Firstly, the issue of the narrator; a terrible droning storyteller, with a bad American accent ( is he really US?) that is irritating and so wearing on the swing of the story; as for his attempts at narrating the female characters dialogue, the worst, laughably bad!

Then, the dialogue and writing style of Stone, far from advancing the pace and excitement of a good story, merely serves to emasculate any thrust and guts from the adventure.

The writing style, is tiresome, pretentious, dated and altogether unenjoyable.

I hated this book, quite frankly; oh well, at least the film improved on the book, which is a rare thing!