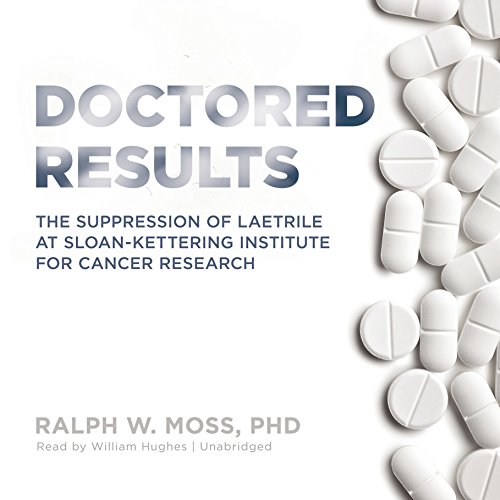 A fascinating insider's account of a major cancer cover-up.

Ralph W. Moss was assistant director of public affairs at Memorial Sloan-Kettering Cancer Center in New York City when he unveiled a cover-up of positive tests with America's most controversial anticancer agent, laetrile. He was ordered by Memorial Sloan-Kettering Cancer Center officials to falsify reports. He refused. Instead he organized an underground employee group called Second Opinion to oppose the cover-up.

Moss is the author of more than a dozen books on cancer, but this is by far his most dramatic work: a first-person account of those shocking events.

Telling the unbelievable yet worth a look!

In these socially driven media days, it takes a bit of social unconsciousness to admit to reading certain books. Yes, normally I'd probably not admit this one in a cocktail party, facebook, twitter, etc. But Mr. Moss goes above and beyond to build a case for the "suppression" of Laetrile at Sloan Kettering. And that is the first warning I would give about this book. There is an unbelievable amount of detail that could only be delivered by an insider with a literary bent. I did not find this to be easy listening, and almost gave up. But Mr. Moss was not writing a book as much as he was building credibility / building a case for his suppression claim. Does he make good on his suppression claim? I think the question would almost certainly make for good debate. On one hand organizations are thought to behave as individuals with a collective self interest. The behavior described by Mr. Moss could be described as a benign form of neglect, but the detail he brings to the story makes a strong claim against it. And yet I find the charge of "suppression" to be a claim I'd have to think harder about before signing up for.

If it was suppression, then certainly many other researchers inside and outside Sloan Kettering were aware and capable of intervening. And I think that is the real reason to read the book. To understand how collective self interest and risk aversion in the scientific research community could potentially "suppress" / "not do the right thing" / "harm" the broader community that research is supposed to help. This is a deep claim against an important segment of our society's intellectual leaders, and Ralph Moss did a strong job of building credibility with this book. Not sure I'm on board with all of Mr. Moss's claims, but I also don't know that our current medical systems are orchestrated to consider in a rational way technologies/chemicals/etc. such as Laetrile. Highly recommended book, but beware if you are bored easily by detail and/or have a hard time with conspiracy tales. I had difficulties on both accounts, but felt rewarded as I made it through.

Doesn't seem real until it is. There are people and forces at work to keep this industry profitable. That means synthetic chemicals only (can be patented) are to be studied and considered viable treatment in the medical (not just cancer) industry. Your doctor is not only not informed of these potential therapies, but risks loss of their livelihood through sanctions or revocation of their medical license should they choose to use any means of treatment that has not been deemed "the standard of care" based on "evidence-based medicine". This book reveals how sorely independent scientists are needed to study compounds such as these outside of our unfortunately bought-out "sanctioned" institutions of scientific inquiry.

A must read for everyone as statistically you or someone you care about will be affected by cancer.