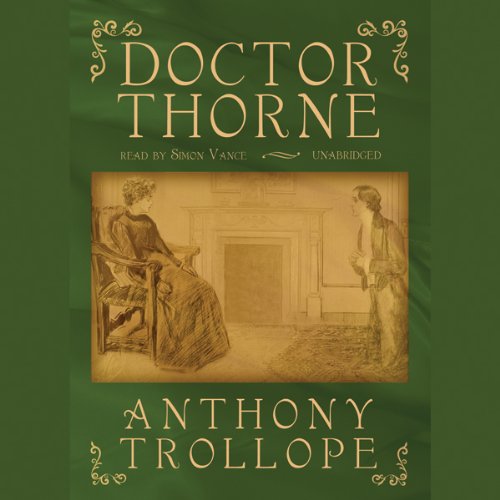 Anthony Trollope once said, "A novel should give a picture of common life enlivened by humour and sweetened by pathos." Trollope admirably fulfills his own criteria in this charming third novel in the Chronicles of Barsetshire.

Doctor Thorne adopts his niece Mary, keeping secret her illegitimate birth as he introduces her to the best local social circles. There she meets and falls in love with Frank Gresham - the heir to a vastly mortgaged estate and obliged to find a wealthy wife. Only Doctor Thorne knows that Mary is to inherit a large legacy that will make her acceptable to the otherwise disapproving middle-class society to which Frank belongs. Where fiery passion fails, understated English virtues of patience, persistence, and good humor prevail in this most appealing of Trollope's comedies.

"One of the great English Victorian novelists....A sharp but sympathetic observer of Victorian social and political life." (Daniel S. Burt, The Biography Book)

Dickens Without the Treacle

But first, I must apologize to that girl in the hat.

She was what Bertie Wooster would have described as “dynamic”, the sort of “brainy female” (like Honoria Glossop) who would make him dive into the nearest shelter until she had blown over. She certainly had that effect on me, though for other reasons. She sat in the front row of my Honors English seminars every day, on the Fridays before football games in an oversized Maize ‘n’ Blue cowboy hat. She was enthusiastic. She knew the answer to every question. While Bertie was a polished boulevardier, I saw myself as the scruffy, authentic antithesis to all this girl’s Ivory Soap complexion and school spirit. So when she declared that she had read everything Anthony Trollope had ever written and loved every page, I dismissed Anthony Trollope in toto. Who knew? He may have worn a hat like hers, too.

I often buy books because they are “good” for me. Because they are part of the mental furniture any slightly educated person should possess. All Quiet on the Western Front. Pilgrim’s Progress. Gulliver’s Travels. Afterward I’m glad I possess these pieces of furniture. But a rarely if ever go back to polish them.

I started Trollope on the same principal, and soon realized that it was unnecessary to set my jaw and take it like a man. It’s hard to set your jaw when you’re smiling, nay, laughing all the time.

That girl in the funny hat was right. Trollope is a sheer delight.

Imagine a novel with all the wit and acumen, all the memorable characters and situations, all the human insight and artistic craftsmanship of Great Expectations or Tale of Two Cities. Now imagine that novel without the cloying sentimentality, the social protest, or the annoying soapbox antics that mar everything I’ve ever read by Dickens—with the notable exception of Pickwick. Imagine all that and what have you got? Anthony Trollope.

Don’t get me wrong; I love Dickens. I’m not saying he wasn’t right about child labor, work houses, the toils of the legal system, or the proper way to treat an employee with a crippled son. But Trollope has been a revelation and a relief: not every Victorian novelist lay awake nights because of conditions in the coal industry.

More, Trollope strikes me as a precursor of my all-time favorite writer, P. G. Wodehouse. He steps out from behind the curtain to apologize for the length of a chapter, or declare that this character is his hero and if you don’t like it you can pick your own. In this third of the Barchester novels, his comedy starts to move beyond the merely verbal to the situational and even physical—again, very Wodehousian.

And because he doesn’t go for the heartstrings so regularly, when he does strike a somber or touching or dignified note it is so much more effective. The final sentences of Barchester Towers, the novel before this in the series, are beautiful.

Like Wodehouse, Trollope creates a comic world populated by people like Mr. Reddypalm, a publican, Doctor Fillgrave, and political operatives named Messrs. Nearthewinde and Closerstil. Yet there are also Courceys and Thornes and Skatchetts, too. The realistic co-exists with the picaresque and we enjoy both equally.

And there are passages that, though of Victorian vintage, nevertheless take advantage of the quaint or ridiculous aspects of even the most sacred scenes, mining them for amiable, Wodehousian humor. Here our hero offers his hand to our heroine as she sits upon a donkey:

“Frank, on the whole, rather liked the donkey. It enabled him to approach somewhat nearer to an embrace than he might have found practicable had they both been on their feet. The donkey himself was quite at his ease, and looked as though he was approvingly conscious of what was going on behind his ears.”

And, like Wodehouse, Trollope gets a lot of mileage out of the names of law firms:

This is, of course, not the only aspect of Trollope that makes his novels delightful. But it’s one that I especially enjoy. And I enjoy it even more when the incomparable Simon Vance is reading.

It makes the people who know me laugh at me but I look forward to my 90 minute commute every day because I get to spend time with my latest 'audible' book and no demands from anyone else. This has been especially true for my readings of Trollope's Barsetshire novels, especially 'Doctor Thorne'. I find these wonderful narrations an escape from stress and care and I am grateful for their re-recordings. These new, fresh versions have excellent sound quality and a truly outstanding reader in Simon Vance. For those who savor 19th century English novels, nothing can beat a few hours with Anthony Trollope and Simon Vance. By the time I get home I'm a pleasure to be near again (or at least that's what I like to think).

The story is great, if you like Anthony Trollope -- and I love him. The announcer is great, if you like Simon Vance (and how can you not?). But, of all the audio books I have listened to over the years (hundreds), this is one of the worst productions. I was surprised that it was Blackstone Audio, which is one I generally trust. The sound engineer must have been asleep. Every so ofter, there is an edit where Simon Vance obviously re-read a line or two -- but there is absolutely no attempt to match the pitch, the tone, the level. It can be very disruptive.

The story is great, if you like Anthony Trollope -- and I love him. The announcer is great, if you like Simon Vance (and how can you not?). But, of all the audio books I have listened to over the years (hundreds), this is one of the worst productions. I was surprised that it was Blackstone Audio, which is one I generally trust. The sound engineer must have been asleep. Every so ofter, there is an edit where Simon Vance obviously re-read a line or two -- but there is absolutely no attempt to match the pitch, the tone, the level. It can be very disruptive.

Hooray for Audible for adding this and Framley Parsonage to their library. Doctor Thorne is considered one of Trollope's finest novels. Simon Vance does a nice job reading. Now let's hope they add The Last Chronicle of Barsetshire.

Simon Vance reads the humour between the lines of Trollope's classics in a way that keeps me wanting more. Many threads come together in this 3rd volume, and many also begin here. The rich smorgasbord of characters also offer a great listen, and re-listen.

balm for the soul

I agree with a previous reviewer about the value of good 19th century lit as balm for stress! At the same time, this novel presents an interesting portrait of the perception of alcoholism in its day. Trollope seems to highlight a Victorian vice in each movel in he series - that said, all the novels are a comfortable read if your life is too complicated for the angst of contempory lit and you look for prose/characters more substantial than pulp. Although we know there are few real people as sterling as Mary or Dr Thorne, somehow reading about them renews my faith in the potential of human nature.

interesting similarities of detail between <i>Dr Thorne</i>and Gaskell's <i>Wives and Daughters </i>(published later)--- I think Gaskell was a friend /protege of Dickens, and I think Trollope takes a few minor snipes at Dickens' sometimes ham-fistedness in earlier books of the Barsetshire series, so there may be layers of like trivia to uncover as you listen

As Anthony Trollope is a distant ancestor of mine, I'd always felt that I ought to read his books, "ought" being the operative word. Victorian novels are not really my thing. So when Dr. Thorne was on sale at Audible, I thought this would be a painless way to pay homage to my great-great-great-something-or-other. What a pleasant surprise! Trollope is a witty and solicitous companion as he takes you arm-in-arm as you stroll through a most engaging tale. Simon Vance is, as always, a wonderful narrator.

Yes, if they like an acerbic version of an English romance

What other book might you compare Doctor Thorne to and why?

Any Jane Austn, because of the funny class descriptions threading through a serious romance

Have you listened to any of Simon Vance’s other performances before? How does this one compare?

Yes and he is terrific in this. He does the women's voices very well.

Although I feel a bit "unsophisticated" saying so, there were times in during this book that I couldn't seem to pay attention. It has an incredible amount of descriptive and explanatory passages. That being said, I enjoyed the general story, and found myself either unable to pay attention or loving every second. There was very little middle ground. If you love very descriptive authors, you'll love this. It was a nice love story.

Simon Vance wonderful - except the heroine

Simon Vance is such a great narrator, Audible could sell him reading a Google search list out loud - so I don't understand why he reads the voice of the heroine (Mary Thorne) as though she has a mouthful of prunes. There's a slight tendency for caricature in some of his other female voices too - yet others are excellent, Dr Thorne's voice is perfection, and the overall effect and atmosphere Simon Vance creates is brilliant. For these reasons - and because it's such a great novel - I managed to ignore the prune effect by and large, but it doesn't reflect well on the sellers of this audiobook, that they didn't recognise and remedy this problem. The end result is a unfair reflection on a great narrator. Must do better, Audible!

A story, not too far away from our modern time, is well portrayed. Characters like Doctor Torne and Mary Thorne, do reflect the tide approaching our 'modernness'. Meanwhile, integrity, though becoming less and less common, found and ingrained in Doctor Thorne, is being upheld through and through. The value of loyalty is stressed also...

A easy and beautiful read, performed, as always by Simon Vance.

for the Barchester books but still too 1950's for more than 3 stars. A good book, but all the characters sound as though they have stepped out of a 1950's British film.

great prose beautifully read. my favourite author, so pleased to have found him on 'audio'
does he pre dat jane austin as there are certsinly echoes i her novels.