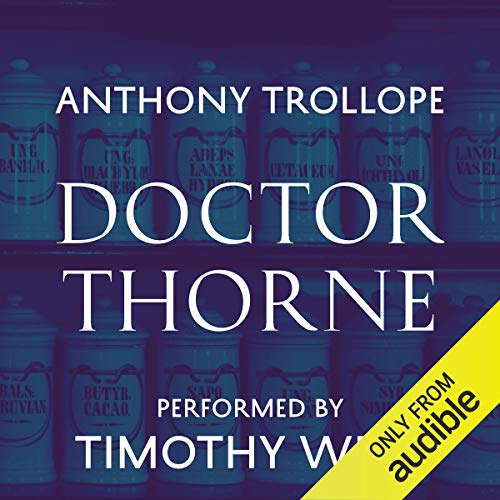 Doctor Thorne is the third audiobook in Anthony Trollope's series known as the Chronicles of Barsetshire. Long regarded as one of Trollope's greatest works, it is a complex story of love, greed and illegitimacy. Set in fictional Barsetshire, it concerns the romantic challenges facing Doctor Thorne's penniless niece, Mary, and Frank Gresham, the only son of the impoverished squire of Greshambury. Mary falls in love with Frank but he is constrained by the need to marry well to restore the family fortunes and Greshambury estate. Despite the promptings of his family to consider a Miss Dunstable, heiress to a fortune, Frank's affections persist, and the humane Doctor Thorne, as Mary's protector, must confront the prejudices of the mid-Victorian society.

Timothy West's narration enhances all the wit and satire that one expects from Trollope. Full of snobbery and hypocrisy, it is a social comedy full of some of Trollope's most brilliant characters.

Timothy's theatre includes King Lear, The Vote, Uncle Vanya, A Number, Quarter, and Coriolanus and his films include Ever After, Joan Of Arc, Endgame, Iris, The Day of the Jackal. On television, Timothy has appeared in Broken Biscuits (BBC), Great Canal Journeys (across 3 Series), regular role of Stan Carter on EastEnders (BBC); Last Tango in Halifax; Bleak House, Bedtime and Brass.

Public Domain (P)2014 Audible, Inc.
" Doctor Thorne is engaging, witty, profoundly moving, and full of emotional strands that seem as relevant today as when it was written. I love it." (Julian Fellowes)

Despite many years of reading, this is my first encounter with Anthony Trollope. What a delight! The writing is a blend between Jane Austen and PG Wodehouse - briskly set in 19th century English countryside, filled with engaging and lively, and occasionally flip, characters. Timothy West's narration is perfectly in tune with the story. I'd recommend this book to anyone who enjoys Austen and/or Wodehouse.

The third volume in Trollope's Barchester Chronicles, is, for the most part, a typical tale of young lovers separated by the rigid class distinctions of Victorian England. Frank Gresham, whose father has mismanaged the family fortune and is on the verge of losing his beloved estate, is expected to marry for money, but he has long loved Mary Thorne, the titleless, penniless niece of the local doctor. It all turns out well for them in the end, of course, as in such novels it usually does; but it's the many sidetracks and delightful characterizations and the way these are all intertwined that make so enjoyable. The perpetually intoxicated Sir Roger Scatchard, for example, a murderer who did his time, made a fortune in the railroads, and was granted a baronetcy, and his lovable, unaffected wife, Lady Scatchard, who enjoyed life much more as a wet nurse. Lady Gresham, who would willingly marry her children to nobodies--as long as they came with enough cash to save the estate. The down-to-earth Miss Dunstable, heir to the Oil of Lebanon fortune, who knows a golddigger when she sees one and encourages Frank to go with his heart. Uber-snob Amelia DeCourcey, who persuades her cousin Augusta Gresham that it is her duty to rejct the proposal of the lawyer, Mr. Gazeby--and then promptly marries him herself. Doctor Thorne himself takes the part of the voice of reason throughout. A rather predictable plot but still an enjoyable read.

A good book. Well narrated. Thanks to Audible for having this is in store. I would recommend this.

Timothy West is absolutely perfect as narrator for Doctor Thorne, one of Trollope's very best. West dexterously highlights Trollope's subtle humor and warm stories in a way the printed page cannot. It is a pleasure to listen to his performance and...it is a performance. A love story is the heart of this work but by no means is its muscle and blood. Trollope takes a mighty comic poke at lawyers, business affairs, and politicians. In addition, human frailties and tragedy are important threads woven into the fabric of this tale.

The title of the book could have been Mary Thorne after the heroine, an unusual one for the time: a girl who was born a (using the author's word) bastard, this in a era where birth, blood, rank and wealth was all. As the write up states, the hero, Frank Gresham fell in love with this unsuitable girl. One should point out that the imprudence and follies of his mother, Lady Arabella, had a great hand in reducing the family fortunes to its present state of poverty. Naturally, she had no concept she had any hand in the business and busied herself after the manner of Mrs. Bennet in making good matches for her children...and greatly to the complications of this story, in breaking up unwise ones.

Trollope stories are soap operas no less than Days of Our Lives. There are dozens of major characters who drop in and out of the story as the spotlight falls on this one then that one. The objective is that the story is to continue, after all who wants the story to stop? Not the readers of the serialized Trollope stories or the viewers of today's soaps nor do the writers, sponsors or advertisers; one more installment means one more paycheck for everybody. For instance, Days of Our Lives has been in continuous production for 60 to 75 years since the days of network radio...and Trollope continues also.

The end of this story is predictable from the beginning of this book, but getting there is so much fun. Trollope's slightly jaundiced eye is turned on the small-town aristocracy in this volume of the Barsetshire novels, and just as he dissected the ins and outs of clerical politics in Barsetshire Towers, he dissects the expectations and pretensions of the landed gentry in this volume. Frank, the hero, struggles to maintain his integrity without compromising his responsibility to his family, and Mary struggles to be true to Frank without locking him into a commitment that will destroy his social standing. Dr Thorne, Mary's uncle and guardian, must step cautiously through an obstacle course of conflicting responsibilities. And there are the wonderful supporting cast--Miss Dunstable (my favorite), Louis Scatchard, Lady Arabella Gresham, Mr Moffitt, and the rest.

I know Anthony Trollope loves to wind you up and make the situation as bad as it can possibly be before he finally gives you (and the characters) some relief, but this one takes the cake. The de Courcy family... wow. Good thing we have Miss Dunstable to take our minds off them. This book is filled with lovable characters, too, so it's a lot of fun to read. Timothy West's narration is great, as usual.

Trollope is always a good value in Audiobooks, over 20 hours of a well read story that keeps you glued to the headphones - even though you may have heard it nearly all before in other Trollope stories

Gets 4 over 5 because it is somewhat predictable

.. but so what! I have now completed Trollope's entire Barchester/Barseter series (6 novels) and enjoyed them all. "Doctor Thorne" presents an interesting (and familiar to Trollope fans) story of class vs. wealth and character vs. class. The series chronicles the lives of persons in rural and small towns identified largely by ecclesiastical boundaries in mid-19th century England as it transitioned from the dominance of landed gentry to the rise of wealth and power of industrialists. If you like wholesome stories about the triumph of romance over class and cultural barriers, I highly recommend this series! The narrator, Timothy West, is superb! On to The Pallisers for me!

The protagonist, Dr Thorne is a character for which the reader becomes quite fond. He is a complex and strong character. The dilemmas which the author presents are typical of those of the time and setting. This book is part of a series and I enjoyed it immensely. Characters become part of the overall saga and this in itself is interesting. The performance is brilliant.

After the infuriating 1950's-British-film readings of Simon Vance, made worse by his not remembering from chapter to chapter what eccentric accent he has given the minor characters, and, in Dr Thorne, his giving Roger Scatcherd, born and bred in West Country Barchester, a northern accent (presumably because he is a railway contractor) we have the impeccable and absorbing reading of Timothy West. Double three cheers, can we have the rest, and can we also have his readings of the Palliser novels?

What a pleasure! This reading is every bit as wonderful as I remembered - far superior to the two other unabridged Barchester versions I am aware of. Please, please can we have the rest? Timothy West does everyone from the slimy Slope to the shirty Archdeacon with enormous humour and understanding but without falling into parody (which soon becomes tedious).

I remember vividly how he did the babytalk in the main chronicle, Barchester Towers - completely convincing, somehow very feminine, very delightful and silly - can't wait to hear it again. And Lily Dale, and a host of other characters. What a genius the man is, worthy of Trollope himself! Bring him on....

I know this reading from audiocassettes and it is superb. It would be wonderful to have all the Timothy West readings of Trollope available - the complete Barchester and the complete Palliser chronicles. He is a marvellous reader and manages to give a distinct personality to every character who speaks. Please let's have the complete set.

A faultless performance but then Timothy West has no rival in the reading of Trollope and he conveys the author's wickedly sly humour with relish.His voices are wonderful whatever the novel...the de Courcy menage are particular favourites! Can I add my voice to all the others and ask that we have everything Timothy West has recorded as soon as possible, please?

Dr Thorne is one of the less well know of the Barchester Chronicles series, but having listened to this superb reading by Timothy West it's hard to know why. The story is straight forward, but the humour and characterisation make it both believable and compelling as the hoped-for ending is worked towards with great style. Beyond that the book is also a telling exploration of a part of Victorian society that was driven by a desperate need to maintain the status quo at almost all costs, utterly ignoring such mundane matters as personal happiness! This is so good it almost makes a lifelong Dickens devotee changes his allegeance.

What a performance! A thrilling story beautifully narrated. Every character brought to life, resulting in complete engagement in the story by the listener. I can't rate this narration highly enough.

There isn't anyone better than Timothy West to read these novels. I echo the reviews of others who would like all the Trollope books on audible.

I won't write too much as Timothy West has been deservedly well reviewed by other listeners. Suffice too say the praise he has previously received is amply justified - I will be listen to all the Trollope titles I can find!

timothy west is born to read trollope. he brings the characters to life so wonderfully.
Please add all his Trollope readings to the site as soon as possible.

In truth this is not a great novel - the plot is ponderous and predictable, the characters are interesting but generally without great depth.Yet Trollope is a compassionate and often acute observer of human nature and Victorian society,and Timothy West's superbly judged and always entertaining reading lifts what might otherwise seem prolix mediocrity into a most enjoyable audiobook. Trollope read so well is a rare treat.