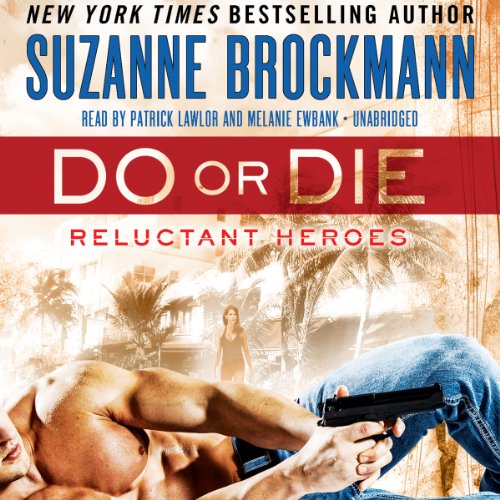 Suzanne Brockmann's seamless blend of heroic military action and intense passion inspired USA Today to call her "a superstar of romantic suspense" - and for years her award-winning Troubleshooters audiobooks have been must-listens for fans of sizzling stories of action and adventure. Now the New York Times best-selling author shoots to thrill again with Do or Die, an electrifying new audiobooks that is certain to win Brockmann new listeners and delight devotees.

Navy SEAL Ian Dunn went rogue in a big way when he turned his talents to a lawless life of jewel heists and con jobs - or so the world has been led to believe. In reality, the former Special Ops warrior is still fighting for good, leading a small band of freelance covert operatives who take care of high-stakes business in highly unofficial ways. That makes Ian the hands-down choice when the US government must breach a heavily guarded embassy and rescue a pair of children kidnapped by their own father, a sinister foreign national willing to turn his kids into casualties. Shockingly, Ian passes on the mission for reasons he will not - or cannot - reveal.

But saying no is not an option - especially not for Phoebe Kruger, Ian's beautiful and unexpectedly brash new attorney. Determined to see the abducted children set free, Phoebe not only gets Ian on board but insists on riding shotgun on his Mission: Impossible - style operation, whether he likes it or not.

Though Phoebe has a valuable knack for getting out of tight spots, there's no denying the intensely intimate feelings growing between Ian and Phoebe as the team gears up for combat. But these are feelings they both must fight to control as they face an array of cold-blooded adversaries, including a vindictive Mob boss who's got Ian at the top of his hit list and a wealthy psychopath who loves murder as much as he loves money. As they dodge death squads and play lethal games of deception, Ian and Phoebe will do whatever it takes to save the innocent and vanquish the guilty - or die trying.

Suzanne Brockmann hits another out of ballpark!

Congratulations to Suzanne Brockmann--DO OR DIE rocked ALL FIVE stars.

TOP REASONS WHY IT EARNED A FIVE STAR REVIEW FROM ME:
* Patrick Lawlor and Melanie Ewbank are extraordinariliy good matches to Brockmann's writing. Their performance is always 3-D and truly extraordinary-- this book was no exception to that rule.
Amazing, 3-D characterizations that remained true to themselves.
* Tightly interwoven, multiple plot lines and multiple point-of-view characters--and it was easy to follow, and WORKED.
* Beautiful balance of suspense, romance, thriller elements, military aspects.
* Pacing in this action-packed book was ideal....quiet, introspective, share-my-background-with-you-because-I'm-falling-in-love-with-you scenes were offset by action scenes that rocked.
* It was fun to see beloved secondary characters (like Yoshi, Martell Griffin, and Jules Cassidy--even if he was only mentioned in passing).
* Dialogue and tags written like the consummate professional Brockmann is.
* Plot twists and turns that kept me guessing. While events were beautifully foreshadowed, events didn't go as planned, didn't unravel the way I'd anticipated--I liked that!
* Ultra-rewarding comeuppance for the bad guys.
* Hard-won happy endings....and the sense of an optimistic-next-step for the romances. Without an unrealistic "let's get married--right now" kind of wrap-up, I had the complete confidence the romantic couples will be just fine in the future. That's all I need!
* This book is a superb opening to a new series (Reluctant Heroes)...and WOW...did Ian Dunn's story illustrate what a reluctant hero he is!
* For me, this book delivered 100% on its promise...from the book description/blurb, from my past experience devouring ALL of Suzanne Brockmann's Troubleshooter series (and even older works). Brockmann just keeps getting better and better.
* Characters face serious conflict, and they triumph by hard work, teamwork, trial and error....and EARNED the solutions.

Would you recommend Do or Die to your friends? Why or why not?

I would not recommend, the slow start made it not worth the read.

What didn’t you like about Patrick Lawlor and Melanie Ewbank ’s performance?

Melanie's delivery was stronger than Patrick's often overshadowing his delivery. The scripting was pretty bad. When you have a female and male performers, you should let the male read the male parts and the female the female parts. In this scripting, it was mixed, with both male and female performers reading both male and female, many times the same performer reading the same character.

Decent story after the slow start.

After a slow start, it did get better. If I didn't have the speed adjustment where I could listen at 1.5 times the normal speed, I would have never made it.

I would doubt anyone is a bigger fan of Ms Brockmann, and it was with eager anticipation that I got this in Audio and paperback. Three attempts to continue on with reading/listening were aborted in the first third of the book. I never got into either of the leads at all, had zero interest in either of them, and it seemed too elaborate a premise, too cluttered.

Lawlor and Ewbank have narrated other of Brockmann's books and really added to them, but they couldn't save this.

I can't wait for the next of brockmann's books, but I'll tuck this one away under false starts and hope she continues instead with the futuristic series she began a few years ago.

First book in a new series!

Suzanne Brockmann is off to a great start to her new "Do or Die" series with Reluctant Hero. A mob family, foreign terrorist, the FBI, covert ops, a gay couple with a baby, a lawyer, plan A, plan B, goat f**ks and ex-Navy Seal Ian Dunn.

A pull you in romantic suspense that is not too heavy on the testosterone. Fantastic narration.

Another Home Run for SB

If you could sum up Do or Die in three words, what would they be?

Captivating, Intense and worthwhile if I can only use 3.

Ian. Why wouldn't he be my favorite. A guy like him doesn't even need to be good looking to be sexy and attractive. He is just so thoroughly male. I love Yoshi though too. His quiet dry humor has made me laugh on more than one occasion

I can't pick a favorite. They were all good

I wanted to but couldn't. It took me 3 days. Unfortunately, my life's too busy to sit and listen to a book all day.

I have read every book SB has written. I adore her style and her characters. She has a wonderful way of making you relate to them and like them and care what happens to them. She also makes them some how more real than a lot of authors do. She has a fan for life in me.

I enjoyed this story -- it had a lot of build up -- introducing all the characters --
I think her new series is going to be good. The main girl could have had a lot more backbone but in the end she did. the hero needed to let people help him and in the end he did

There is nothing fresh and new in this book. I didn't really care for any of the characters. Repeat story line from her troubleshooters books ( and not as well done) Narrators are the only good thing about this book.

I loved the troubleshooter series and thinking this was a spin off I bought the book. I promptly forgot I had it in my library for years. Luckily, I realized I had it and processed to listen to it. While it was not quite in the league as some of the other books in the Troubleshooter series it is a great romantic adventure. I look forward to the next book and hope to see some of these characters in the rest of the series. I know that Suzanne Brockmann likes to arc her books to intermingle stories, so there is hope they will be. I enjoy the narrators, I wish the male narrator had a deeper voice, but he does an excellent job.

Glad we have a new book!

I really liked the humor....loved the new characters....loved the narrators....looking forward to the next installment....This is a little more intrigue but worth the purchase!

She goes from strength to strength

I'm an addict of excellent plots and being kept guessing. This one is one of her best! The romance was an really good one as well.

Enjoyed it immensely, will be looking at getting more of her books. Characters were well defined, plot was interesting and I was quite disappointed when it was finished.

Love your performance but can I, as a Dutch person give you one tiny bit of advice. When doing a Dutch accent. Try 'st' as sh sound. If you want to roll your R's with putting tongue against both sides of teeth and G as if you are scraping your throat grrravy. Besides the fact that I thought he sounded Russian, the rest was ace. Loved it. Enjoyed it immensely. Both performances were brilliant