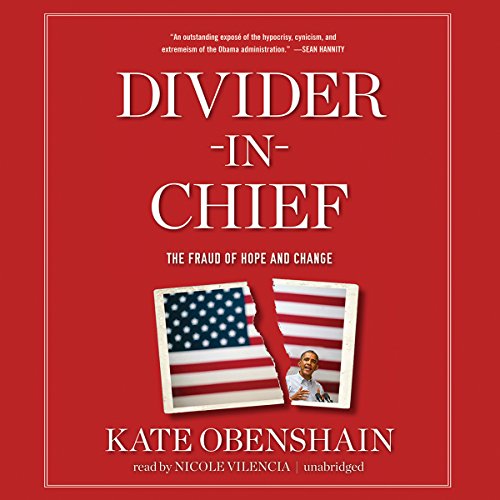 When Barack Obama ran on a platform of "hope and change" four years ago, he promised to unite the country. But as Kate Obenshain reveals in Divider-in-Chief, Obama has done exactly the opposite. Rather than seeking common sense, pro-American solutions, he has pursued far-left policies, a radical leftist agenda, and an attitude that’s both condescending and dismissive of Main Street America. As a result, America has become a nation of even greater polarization and disillusionment.

In Divider-in-Chief, Obenshain exposes how Obama pushed for the HHS mandate, forcing people of faith to violate their conscience; how Obama has condoned the actions of Occupy Wall Street, saying, "You are the reason I ran for office," while he vilifies free markets and businessmen across America; how Obama seizes on opportunities to highlight racial discord and then accuses any critic of being "a racist"; and that, although Obama ran as a champion for the downtrodden, the unemployment rate is disproportionately high among minorities and women.

Obenshain paints a picture of a president who promotes class warfare, aggravating racial, gender, and economic differences in order to advance his ideological agenda. Searing and controversial, Divider-in-Chief makes the case that we must defeat Barack Obama before he tears our nation apart.

Kate Obenshain, a rising star in the conservative movement, was the chairman of the Republican Party of Virginia and is now the vice president of the Young America’s Foundation and a respected board member of the Clare Boothe Luce Policy Institute. She travels across the country speaking on college campuses, at Tea Party rallies, and special events. She is also a regular Fox News contributor and has appeared on numerous cable news shows.

©2012 Kate Obenshain (P)2012 Blackstone Audio, Inc.
Conservatorismo e liberalismo Storia e teoria Politica e governo Stati Uniti
Mostra di più Mostra meno
"Kate Obenshain’s new book Divider-in-Chief is an outstanding exposé of the hypocrisy, cynicism, and, extremism of the Obama administration. He claimed to be a uniter, but Kate’s book identifies where and how he has been the ultimate divider of Americans. If Obama is shown the door after the 2012 election, Kate’s book will be one of the reasons why everyone needs to read this before November!" (Sean Hannity, host of Hannity’s America)

A Must Read Book, before you vote

Would you consider the audio edition of Divider-in-Chief to be better than the print version?

we travel a lot, so this was great to listen while we are traveling. So much better than listening to music, that
just may lull you to sleep on road trips. This book keeps you so interested you enjoy all the reading.

What does Nicole Vilencia bring to the story that you wouldn’t experience if you just read the book?

My son and I listened together, and we agreed on everything she said.

Obama is our worst President this country has ever had, and we sure hope he gets ousted by a huge huge number.