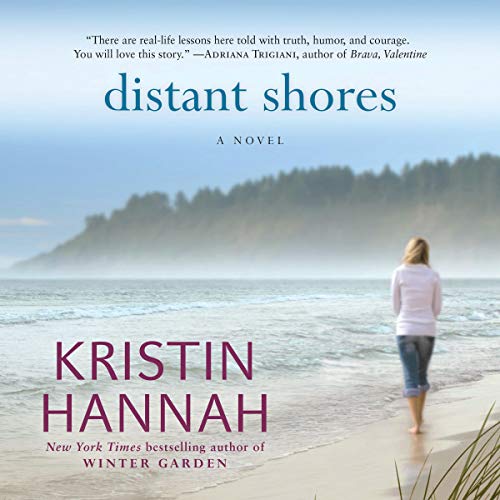 Elizabeth and Jackson Shore married young, raised two daughters, and weathered the storms of youth as they built a future together. But after the children leave home, they quietly drift apart. When Jack accepts a wonderful new job offer, Elizabeth puts her needs aside to follow him across the country. Until the sudden death of her father changes everything. Grieving and alone, she retreats to an isolated beach house where she packs away the last remnants of her parents' lives. There, the pieces of a past she never knew unfold to reveal a tender story of lasting devotion, the kind of steadfast commitment that Elizabeth admits is missing from her own marriage. Faced with her own disillusionment, she makes a terrifying decision, risking everything she has for a second chance at happiness.
©2002 Kristin Hannah (P)2004 Brilliance Audio, Inc.
Narrativa femminile Saghe Narrativa letteraria Contemporaneo
Mostra di più Mostra meno

Hit way too close to home

Having been married nearly 33 years and moved 22 times in that period to a husband who is also a superstar in his field, I oh so get it. I, too, am at that point of my life where I have just about had it with the moves and being put on the back burner. Having raised our child, who is grown and gone, and having to had forgone any sort of career and wondering just what the heck do I do now, and what do I want to do; I really got this one. It is hard being married to a man who is sexy, gorgeous and successful and being a wife looked at by his younger female coworkers as arm candy with no intelligence. You find yourself isolating and not being able to connect and make friends any longer because you know it will end in a couple of years or so. Many times listening to this my heart would just ache. I actually feel a little inspired to get some brushes, canvas, and paint and see if I can still create art like I used to when I was young. I even wish there was a Passionless Woman group as encouragement.

Narrator is the worst ever

I adore Kristin Hannah's stories but the reader for this one is so awkward it is intolerable. I had the distinct impression she hadn't bothered to prepare, read, or bother to even acquaint herself with the author's style. Have returned books before because of narrator issues but this is, by far, the most disappointing experience to date.

Not the best narrator

This is the first time I found a narrator to be difficult to listen to. I will avoid a book if I notice her name in the future

a struggle to reach the end.

Would you be willing to try another one of Bernadette Quigley’s performances?

What character would you cut from Distant Shores?

Too many to choose.

Story and narration equally share the blame for such a boring audible. The narrator's exaggerated fake southern accent was almost laughable. Main character was portrayed as a spineless, lazy, uninteresting, why get out of bed at all, female. Her segments made you want to hit fast forward. The husband Jack's character was a step up. Sub-stories were mere book fillers that went nowhere. This whole predictable story could have taken ten minutes. In a nut shell - couple split up, blah blah blah, wife picks up a paint brush, blah blah blah, she starts to paint again, blah blah blah, blah, blah, blah, blah, blah, couple reunites - the end, thank goodness! Don't waste your time or hard earned bucks on this one. Kristen Hannah has written some wonderfully good reads, "Winter Garden", "Things We Do For Love", "Night Road", "Magic Hour", just to name a few. I honestly don't know where this one came from.

I love Kristin Hannah but this one wasn’t my favorite. Slow moving but nice story. The narrator was difficult to listen to the whole way through.

It was a bit slow but don't turn off. Great story, really enjoy the author.

I have read the reviews and criticisms of this book. Some said they didn’t enjoy it because of the orators voices of the different characters. I say to this, hogwash. This book is excellently written and so profound. I felt the author told my story, and I am certain many womens stories. I felt so connected to Birdie and encouraged by her struggle as well as her decision to find herself after many years of marriage. Frankly, her story is my story, and I’m betting many women out there can say the same. I felt an epiphany as I read it and have been emboldened to make some much needed changes in my life. Many thanks to the author for this story that I can only believe came from the heart. This is the first book of hers I have read, but I will be her fan from here forward.

Narrator Was Painful to Listen To

Not typical Kristin Hannah. Story was okay but the Narrator was awful. Find a different book.

Maybe an older person wiht a boring life would like this book.

What was most disappointing about Kristin Hannah’s story?

There was no real story. The plot line was predictable and the narrator was not good at all. The southern accent was completely off and annoying.

A different narrator is a must.

The book was about love, choices and redemption. The ideas were ok, but not in any way exciting.

Kristin Hanna has done better. Weak plot,dragged on. Narration weak in my opinion. Removed it and moved on.

I really, really enjoyed this book. I loved how it showed that you can rediscover who you are deep inside and invigorate your life without giving up your marriage or family. Elizabeth made mistakes in letting her family take over who she was and lost herself in the process, but she was able to reawaken herself without giving up her husband and daughters. My only real difficulty with this book was that Jack and Birdie didn't exactly have a "normal" family life, and while I'm sure many couples go through similar struggles, Jack's job and fame presented a lot of issues that other families wouldn't have to deal with. Plus, I'm really not a sports fan at all, and I found a lot of the aspects of his work to be pretty pretentious. Otherwise, I thought that the book was a very realistic presentation of what can happen to a couple once their children have left home and they realise that they've forgotten why they got married in the first place. I didn't find this at all depressing, as one might expect, since I'm getting married in five months. It didn't make me scared for what might come in twenty years time. Instead, it encouraged me to pursue my hobbies and talents and not let them get pushed aside. I wouldn't ever want to end up like Birdie, married for twenty-four years yet having no idea of who she is. I could see from Jack and Birdie's experiences that it's important to have a balance in marriage and in supporting each other's dreams. A very thought-provoking book. This was my first Kristin Hannah novel and I imagine that it'll stay with me for a while. I'll be reading more from her.

On the narration: The narrator managed to give each character distinct voices without being over-the-top , and I'm not sure how they managed it, but at certain parts of the recording the audio company used affects to make it sound like someone was talking down a telephone line or shouting from a different room. It definitely brought the characters of this novel to life. Highly recommended

This was an easy read without any major depth to it. I did enjoy it and would recommend it as such. Its nothing like the Nightingale by the same author. I would read other books by this author.