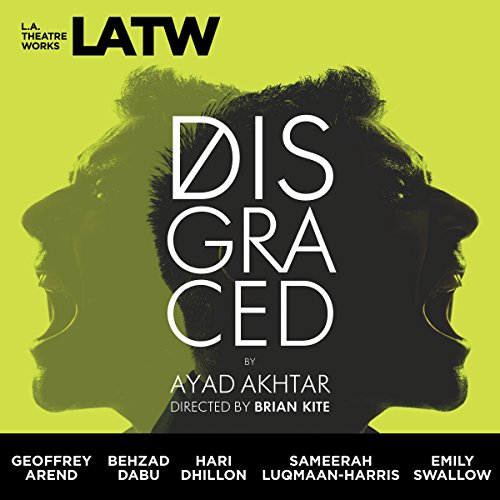 Amir has left his Pakistani heritage behind in an attempt to make partner at his corporate law firm, but his wife Emily doesn’t share his negative feelings about Islam - she’s encouraged Amir to help with the case of a controversial imam. When they throw a dinner party for Amir’s colleague Jory and her husband Isaac, the hard truths revealed lead to the unraveling of their carefully constructed lives.

Enthralling because too often in our effort to avoid course discourse we avoid the delicate work of precise language which helps in addressing the topics raised here. Consequently we might pave over pertinent issues of what we are living through in constructing our day to day identities and the outcome is the banal vacuous affirmations that get us no where. Here is a work with characters whose invested identities are so co-dependent on one another that when one questions the essence of ones identity journey the others squirm and jump in discomfort.

At one point or another I found myself inhabiting the voice of all the characters and alternatively castigating them the next minute. Fantastic that this work can achieve that! Sophisticated people, savvy individuals who in a moment of heightened emotion lose the handle on the cool heads and suddenly the fissures appear.

I heard Amir express that at one point, briefly he cheered the horrific events of 9-11 and yes that was shocking to hear but it also provided a moment / opportunity to talk about a particular rage and where this might live in a otherwise lovable person. Many of my acquaintances heard his confession as a statement of present emotional charge, as if he still felt that way. How did you hear it? Why did you hear it so? I think this is a very important aspect to our understanding of each other - the how we filter each other.

I was least happy with Abe. Not because he was upset at his uncle but that he needed someone to look up to. Why to begin with are some people seemingly romantically involved with the notion of having a hero or mode in their lives. Why is it that it is hard to construct that hero in the interior of ourselves? Why is it that in failing to construct that interior hero we turn in anger and disenfranchisement against forces outside the self?

I needless to say enjoyed this very digestible work. Chapeau!