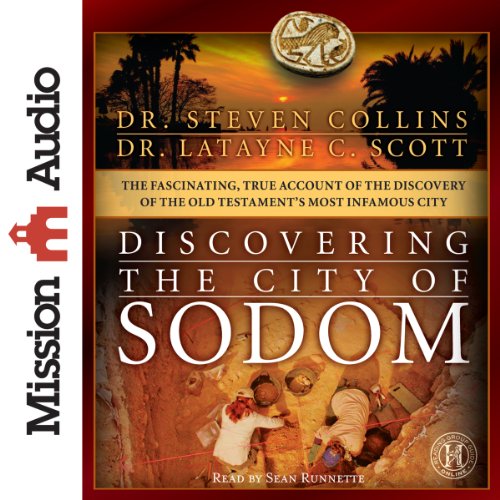 Discovering the City of Sodom

The fascinating, true account of the quest for one of the Old Testament’s most infamous cities. Like many modern-day Christians, Dr. Steven Collins struggled with what seemed to be a clash between his belief in the Bible and the research regarding ancient history - a crisis of faith that inspired him to put both his education and the Bible to the test by embarking on an expedition that has led to one of the most exciting finds in recent archaeology. Recounting Dr. Collins’s quest for Sodom in absorbing detail, this adventure-cum-memoir reflects the tensions that define Biblical archaeology as it narrates a tale of discovery.

The audiobook follows Dr. Collins as he tracks down Biblical, archaeological, and geological clues to the destruction of Sodom and Gomorrah, narrowing down the list of possible sites as he weighs evidence and battles skeptics. Finally, he arrives at a single location that looms as the only option: a massive site called Tall el-Hammam in the Hashemite Kingdom of Jordan. Challenging the assumptions of academics around the world, Discovering the City of Sodom may well inspire a revision of the history books. Dr. Collins has become a new voice in the controversy over using the Bible as a credible source of understanding the past - and opened a new chapter in the struggle over the soul of Biblical archaeology.

What a wonderful accidental discovery!

OK, my title is having fun with the book's subject matter. The discovery of Sodom was anything but accidental. The book plays out more like a detective novel than a non-fictional account of how Dr. Steven Collins found what is believed to be the site of Biblical history's most notorious city.

The "accidental discovery" is mine, in that I "discovered" the book through my network of writers on LinkedIn. Given that I have several thousand such connections I often receive messages from authors announcing their new releases. I love to congratulate fellow writers because getting published can be extremely difficult (says the guy who's still working at it), and in sending such a reply to the author -- Dr. Latayne Scott -- I asked if it was an Audible book yet, as I am almost exclusively an Audible "reader" these days. After receiving a rare "yes, it is," I read the synopsis, downloaded the book and crossed my fingers.

What a fantastic pay off! While I'm not totally unfamiliar with this non-fiction genre, it is seldom my first choice of books because they usually make very dry reading. Dr. Scott, it turns out, is a fantastic writer who brought the subject alive and basically had me sitting on the edge of my seat. I've known a good number of fictional writers who could learn a few lessons from her writing. My compliments, Dr. Scott. Well done!

There is one additional aspect about the book that deserves comment beyond the excellent writing and the fascinating story. The book makes a compelling defense of using Biblical references to enhance archeological and historical research. Until reading this book I was only vaguely aware of the prejudices against researchers like Dr. Collins who advocate such use of the Bible and the disdain scholars like him suffer from the more "scientifically myopic" researchers in the academic world. While Dr. Scott does not beat the reader over the head with this aspect, her writing subtlety makes a clear statement about the shortsightedness and wrongheadedness of such limited and prejudicial thinking. In the end, I was left with a new-found respect for the tenacity and faith researchers like Drs. Collin and Scott must draw on in the pursuit of their chosen life's work.

What a lucky find for me!

I usually don't finish books this size in one straight listen, but this was so well written and narrated I simply couldn't stop. definitely sparked a new interest in biblical archeology. the world needs more books like this.