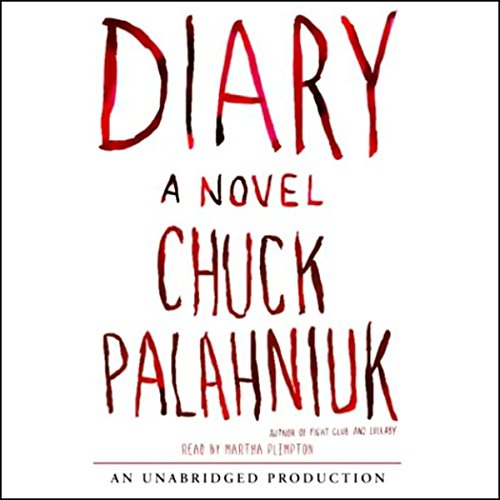 Diary takes the form of a "coma diary" kept by one Misty Tracy Wilmot as her husband lies senseless in a hospital after a suicide attempt. Once she was an art student dreaming of creativity and freedom; now, after marrying Peter at school and being brought back to once quaint, now tourist-overrun Waytansea Island, she's been reduced to the condition of a resort hotel maid. Peter, it turns out, has been hiding rooms in houses he's remodeled and scrawling vile messages all over the walls - an old habit of builders but dramatically overdone in Peter's case. Angry homeowners are suing left and right, and Misty's dreams of artistic greatness are in ashes. But then, as if possessed by the spirit of Maura Kinkaid, a fabled Waytansea artist of the nineteenth century, Misty begins painting again, compulsively. But can her newly discovered talent be part of a larger, darker plan? Of course it can...

Diary is a dark, hilarious, and poignant act of storytelling from America's favorite, most inventive nihilist.

While I must admit that I liked Chuck Palahniuk's "Lullaby" more, I was really drawn into this story - especially by Martha Plimpton's wonderful narration. I simply had to know what the heck was at the root of all the chaos. When all was revealed, I was fairly satisfied. Chuck Palahniuk is clearly one of the most creative (if not twisted) minds of my generation and I look forward to his next novel with great anticipation.

I've never been so annoyed by a book.

Maybe a person who studies anatomy might enjoy this book. Maybe.

Would you ever listen to anything by Chuck Palahniuk again?

Maybe. I know he's definitely got better work than this out there, but I'm afraid this book might have shown me a side of his writing that turns me off, which I might never be able to unsee if I try to read his other work! Maybe I'll find out if that's true, once I forget about this story enough to come back to him.

Exasperation and frustration, disbelief...not only were there maddeningly bad examples of the writing techniques he used, but I also wanted to take his lead character and shake her! What a push over she was.

The author had the makings of a really cool and creepy story here, but botched it with bad writing. This is an example of a writer overusing a gimmick in a story. At first, when he used the explanation of the anatomical features of a human face to help the main characters "recognize themselves" again, it seemed like heavy detail overkill, though I got the point and acknowledged that this gimmick had some poignancy to it. Later, when Chuck continued to use that same gimmick to describe the expressions on the characters faces in long, laborious detail to show how they felt (in a "deep" way) over and over and over again, it seemed like the whole story was becoming a massive waste of time. Then when the story was wrapping up, the heroine's complete powerlessness and inability to do anything but go along with her own demise complicitly, and her unwillingness to recognize that her daughter was a complete sociopath and have her thrown into a mental institution so she wouldn't hurt anyone else, well; those things just made the whole book even more soggy for me. It's not that I need or rely on all my heroines to be the newly stereotypical "strong female role model". It's just that this particular heroine was so completely subdued and resigned that she wouldn't lift a finger to help herself out of an increasingly bad situation. The story just continued to play out all around her, while she passively accepted it all. It all seemed highly contrived and was boring and frustrating. Waste of time!

The uninitiated need not apply

Palahniuk has a knack for writing with a kind of obsessive feverishness that bleeds into the novels and, usually, the readers themselves. A trademark of his previous novels (most especially Choke and Survivor) are twisted, alluring central premises that start out too bizarre to wrap your head around and slowly resolve themselves into a satisfying internally consistent logic. Usually, this process leaves a few plot holes and loose ends in its wake, but what the hell, it's a good ride.
Diary is more mature than Palahniuk's former novels: the thematic structure is strong, the trademark gruesomeness is more subtlely and effectively applied, even the phrase repetitions are more significantly placed, if still used a bit liberally for my taste. But the novel still falls into the trap of biting off more than it can chew, and it raises an awful lot of questions, about the protaganist's husband, the town's history, and its own internal logic, that it never gets around to answering. Palahniuk's fans are used to chalking a few up to surrealism and not letting it get to them, but anyone who hasn't read Fight Club should be prepared to have the hell bugged out of them by the niggling questions.
As for the narration, it's competently done, which is saying a lot for the work: epistolary pieces by ANYONE are tough to narrate without infusing an emotion that obfuscates the significance of the words themselves, and lumping the wry sarcasm of the main character on top of that makes for a fairly difficult narration. I would have preferred less colour to it, but it doesn't get in the way. What did bother me (and may bother others who have read Palahniuk before they listen) is the pace: the author often spends pages spooling out a single twist in the plot amongst a bevy of meaningless detail, a device which works well on the page where you're free to rush through it, heart pounding, to get to the end of the segment, but which is simply torturous in audio form.

The story was fast-paced, interesting, and definitely unusual. I, at least, also thought it was a lot of fun, but in that regard I'm a minority--see other reviews for conflicting opinions about the story's level of grimness.

Palahniuk's distinctive narrative voice was brought out nicely by Martha Plimpton's reading. Last but not least, his talent for ferreting out interesting trivia was particularly on display in this book.

Having just finished this story, I must say that this audiobook's greatest strength is it's reading by Martha Plimpton. Although I have read some reviews claiming her monotonous delivery took away from the experience, I feel that it was in line with what to expect from the main character and allowed the listener to delve deeper into her psyche.
Other reviews are correct in saying that the action does not pick up until later into the story. However, once the plot gets up and going, it only gets more and more bizarre as the story continues. Not that this is a bad thing, I just found myself starting to enjoy the narrator's reminiscing and her dark but humorous approach to events that have happened to her more so than the attempts at trying to unravel the mystery that laid before her.
Since the only other Palahniuk novel I have read was "Fight Club", I would be unable to compare this work to his others. However, being familiar with "Fight Club", I'm confident in saying that "Diary" contained the dark humor and bizarre events that one could expect from him. I did read one review that negatively compared this to a soap opera, and as much as I hate to admit it, the story does come across as something you might find on daytime TV, especially after you become familiar with the supporting characters, particularly the mother.
The ending does deliver you a little,"hmmm...that's interesting" feeling, but by no means does it shock you since much of what you've become familiar with leading up to the ending is weird and you know something that is possibly weirder is going to happen in order to wrap the story up.
Overall, I enjoyed the experience despite a few of what I might consider it's shortcomings. I would highly recommend it to someone that is already familiar with Palahniuk's work or is looking to explore something a little different. Since its fairly short (only 8 hours) and it is quite well read, that is almost reason enough to check it out.

I like almost everything I read, but this was stupid and a waste of my time.

As narrator, Martha Plimpton is wonderful. The story itself is eerie and interesting, but the end disappoints.

I loved Choke and Lullaby but this book is a dog. He broke the cardinal rule in that you don't care about any of the charactors. The book is depressing with a story that just drags on and on. It is not entertaing in the least. His other books are so creative and different. If you are in a great mood, don't read this book because you will feel horrible being made to wallow in the non stop misery of these pathetic creatures.

It has been several months since I listened to this story, but it has stayed with me. Like other stories by Palahniuk, you feel a little soiled and a little disturbed after reading it, but only because his characters are so honest that you almost become part of the story. It is dark and melancholy, and tragic. I really liked it.

I am just a fan of CP

I always have a good time with CP's novels! This one was no different. On to the next one!

not one of chucks best.

a pretty predictable story line with some filler. seems to jump around a lot with no explanation. I didn't enjoy this as much as i did other books by chuckie. the narrators dreary monotone voice made it hard for me to keep track.