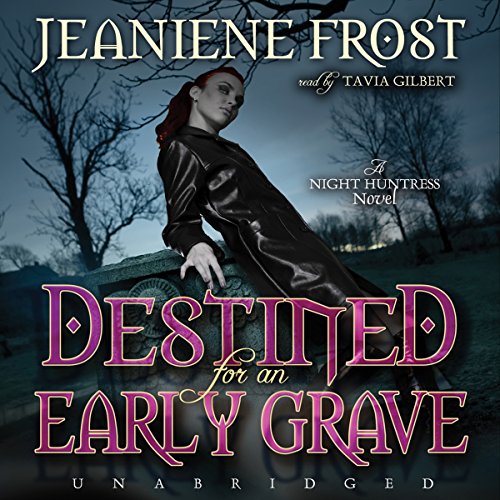 Destined for an Early Grave

Since half-vampire Cat Crawfield and her undead lover Bones met six years ago, they’ve fought against the rogue undead, battled a vengeful Master vampire, and pledged their devotion with a blood bond. Now it’s time for a vacation. But their hopes for a perfect Paris holiday are dashed when Cat awakes one night in terror. She’s having visions of a vampire named Gregor, who’s more powerful than Bones and has ties to her past that even Cat herself didn’t know about.

Gregor believes Cat is his and won’t stop until he has her. As the battle begins between the vamp who haunts her nightmares and the one who holds her heart, only Cat can break Gregor’s hold over her. She’ll need all the power she can summon in order to bring down the baddest bloodsucker she’s ever faced … even if getting that power will result in an early grave.

This series is addicting!!! Highly recommended. The plot is intricate, characters compelling and narration superb. I often forget that I have not seen these in a movie format because once you begin listening you are immediatly emersed into the world of the night huntress - Thank you Jeaniene Frost for sharing your gift.

I've read the print version of this many times but Tavia's reading makes a powerful book even better. You hear the pain, anquish, heartbreak and the love Cat and Bones have for each other.

This book has been the best of the series in my opinion! It has what the last book was missing, passion, and action from the first page! I absolutely love this series and can hardly wait until the next book is released. Cat and Bones are my favorite lovers/haters/romanitcs/killers I've met so far! I also LOVE the fact that they have used the same narrator on ALL the books. She is good, does good voices and I don't have to adjust to a new reader after every book.

Nearly put me in one!

I found this to be the highest octane ride off all the NH novels including the NHW ones too. The friction between Cat and Bones and the pace of the action had me riveted on the edge of my seat for a large portion of the plot. I enjoy this series immenseley and the peripheral characters have grown to such a degree that this book only enhances our knolwedge and affection of them. There are some fabulous one liners that had me bursting in to laughter. There are as many locations as a Bond film, tonnes of action, romance, and plot twists and turns. The rules are changing and the scope for Cat seems limitless as does Bones' love..

From the audio aspect I would have to lower the rating a little, as mentioned before in earlier NH book reviews, this narrator does not do Bones well. It is the actual accent and mispronounciation of some words that grate often. Over time it has improved a little or I may have gotten used to it. Cat, however, comes to life and I anchor well to her through this narrator. The other characters are fine.

Once again Jeaniene Frost has taken you on a wonderful adventure!!! This is a must read and one of my FAVORITE series EVER!! I love Tavia Gilbert as the narrator as well...

This series is a great mix of action and sensual romance. I am not one to bear those mooning romance type novels. Although I found there was a bit of a continuity problem with this book. Bones level of strength is supposed to be unheralded because of the merging with his Grand Sires line, but Cat seems to doubt his strength at every turn. If you’re not a stickler for such minute detail, it is a very enjoyable book.
One bit of advice, although I was excited to see book 5 and rushed to purchase it immediately, I found that there are lots of spoilers for the Night Huntress world books 1 and 2. So I had to stop listening and go back and order those two to catch up.

Disappointed in my favorite series.

I'm a huge Jeaniene Frost fan. Even more, I am crazy for Mac and Bones.
This was a disappointing book, though. There was less romance in the last book, but it was an enthralling, moving plot.
This book has a totally random story. No spoilers here. So there's not a lot I can say to explain my rating. There is far less romance and affection between cat and bones. Maybe readers will say that's how marriage is, but there were several ways to create tension with the characters (I can think of three great ways off top of my head) without resorting to the extremes in this book.
I found myself too upset to pay attention to the plot. And the editor did a poor job, as many meaningless scenes lagged on, frustrating me because cat and bones relationship between cat and bones is in serious jeopardy most of the novel. And they fight the rest of the time when they are together.

This is not the best of the series.
I still don't know what the true nature of cat and bones' relationship is according to vampire law.

Another stellar book from Frost

This is another great addition to the 'Night Huntress' series and Frost has yet to disappoint. Strong characters and storylines, good action and romance, and very clever wit and humour. My only disappointment with the narration is the over-the-top Cockney accent given to Bones. In my head he has more class than he has here. Surely if he's over 200 years old he would have lost the thick accent to some degree. If its meant to reflect some of his Australian heritage - we don't sound like that!! Otherwise, I thoroughly enjoy all of these books on audio and hope the new one is released soon.

Do not miss this book if you like paranormal tales with action, gore, and hot romance. Brilliant narration. Loved it and all others available from Jeaniene Frost.

I adore this series, and Tavia Gilbert is absolutely the perfect voice for them. Her talent of bringing the characters to life, combined with Jeaniene Frost's amazing gift of imagination and storytelling absolutely thrills me. I look so forward to each book coming to Audible!

Errrr why do the French characters all sound German?? Not to mention Bones' horrid English accent. It's tough coz aside from the terrible accents, I really like the narrator!

the Story is great but the woman's accents are so atrocious, they make it hard to concentrate on what she's saying.

This has to be my favourite in the series yet. It’s fantastic to see the relationship between bones and cat develop further and plenty of action to go with it.

Wait till you hear Tavia Gilbert's attempt at a French accent! It trends close to Sacha Baron Cohen's Borat - the phrase "my wife" is ruined for me now. If you can find this amusing rather than annoying (as I did) then this is another entertaining instalment in the Night Huntress Series. Jeaniene Frost is good at coming up with creative twists and new, high stakes obstacles for Bones and Cat to overcome. If you like the rest of the series, you won't be disappointed.

Another one in a brilliant series. easy to read with complex characters and an excellent narration

I genuinely didn't guess where the author takes this next installment in bones and cats story. it has definitely kept my interest and I'm looking forward to whatever she'll come up with next for them!

I really love the relationship dynamics in these books, they are frustratingly accurate and had me really frustrated with Cat or Bones or both throughout the book! ok so maybe we don't keep death match traps from our partners lol but the emotional principals of keeping a secret to 'protect' the other and the unintended impact that can have remain the same. frustratingly good because it had me desperately listening and hoping they'd be able to sort things out while also wanting to know what would happen with this installments fantasy story thread - how did Cat make that jump? who would win from the love rivals, what's going on with Don, not what I think I hope?! Yep J Frost has me hooked...