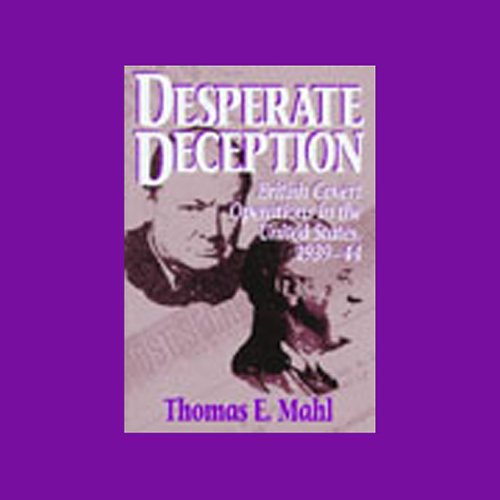 Subtitled "British Covert Operations in the United States, 1939-44," Mahl's account brings together bits and pieces of a story that has been told before together with the best research and documentation of the subject available on this crucial period of Western history. Faced with the growing prospect of war with Germany in 1939, the British government mounted a massive secret political campaign in the United States to weaken the isolationist, bring America into World War II, and then influence policy in England's favor.

Desperate Deception reveals Britain's widespread use of front groups, agents, and collaborators and shows how its agents manipulated polling data and influenced election campaigns. This eye-opening book details a vast program that not only helped change the course of war but also the face of American politics.

I so wanted to enjoy this title, particularly as it tells of a significant moment in UK/USA history. But, i am sorry to report that it is difficult and tedious to listen to. The author sounds like an old "colonel blimp" character and he continually refers to a myriad of forgotten names and overlapping organisations, including hundreds of interminable abbreviations. I know that by design it is a very complicated story to research and information is hard to find and inconclusive but any book must still be entertainig if it is to get its message across. I purchased this title some 6 months ago and am still trying to finish it but it is hard work. Perhaps then i can write a fuller more positive review. I would try harder if i felt I was making some progress but at the moment it is an unrewarding purchase.

I really wanted to like this book, it just goes on and on and on discussing one group or person after another. It is as if you were writing the history of the American presidency and all you did was list their names and dates without talking about the over-arching themes and personalities. And I completely agree with the comment from one of the reviewers about the reader sounding like Colonel Blimp. I gave up half way through.

A very important point is made in this book -- that our destiny as a nation is as much affected by the deceit of its leaders as by the character of its people. This book lays out in convincing detail, how we can be led into war, or anything else for that matter. The book makes no judgment on whether the nation's isolationist mood would have been good or bad (obviously it would have been disastrous for the world if the Axis had pursued its goals without American intervention). However, the weakness of representative democracy as a means of expression of the "will of the people" is a real eye-opener.

Very dull to listen to. Too much enumeration of names. The research is good but The tone is monotone.