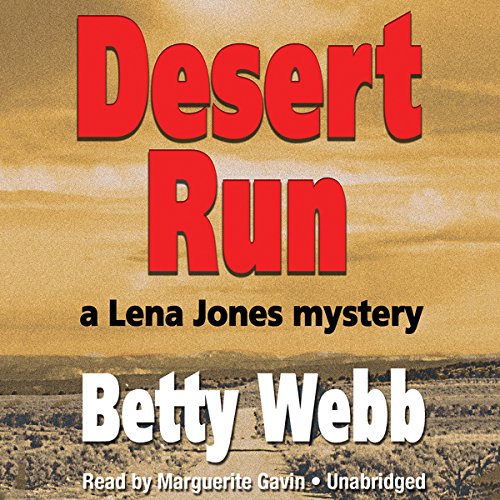 Things are never easy for Scottsdale private eye Lena Jones. Her partner in Desert Investigations, Jimmy Sisiwan, is leaving for a moneyed wife and a job at Southwest Microsystems, and her old captain at the Scottsdale Police Department is off to his home in Brooklyn. Meanwhile, she’s doing security for Warren Quinn, director of a documentary film about the American World War II camp for German POWs at Arizona’s Papago Park, from which some prisoners once escaped.

One surviving escapee, Käpitan zur See Erik Ernst, a man now in his nineties and confined to a wheelchair after a boating accident, has just been murdered. What’s more, the man’s Ethiopian caregiver begs Lena to clear him as a suspect in the murder.

Lena, experienced in probing the past for answers to the central mystery of her own life - who is she? - learns that after their daring Christmas Eve escape Ernst and two other POWs had hid out in Arizona’s rugged Superstition Mountains. Nearby on Christmas night, a farm family, the Bollingers, had been slaughtered. A jury didn’t convict the only survivor, the teenage son, despite some suggestive evidence. What might Chess Bollinger know about Ernst - and vice versa? And how much can Lena trust filmmaker Warren Quinn, either as a client, a witness, or a lover?

In this complex, stunning case based on real Arizona history, Betty Webb spins another evocative, haunting story in her Lena Jones mystery series.

Betty Webb worked as a journalist and bases her mysteries on stories she covered as a reporter. She currently teaches creative writing at Phoenix College.

©2006 Betty Webb (P)2012 Blackstone Audio, Inc.
Investigatori privati Donne detective
Mostra di più Mostra meno
“This thought-provoking novel is a gem. It is a perfect chance to make the acquaintance of an author poised on the national consciousness of mystery fans.” ( Denver Post)
“At the start of Webb’s multifaceted, fast-paced fourth Lena Jones mystery, the scrappy workaholic PI is supervising security for filmmaker Warren Quinn, who’s shooting a documentary about the escape of German POWs from a prison camp in Scottsdale, Arizona, in 1944.… Webb combines evocative descriptions of place with fine historical research in a plot packed with twists.” ( Publishers Weekly)
“Webb bases her latest Lena Jones adventure on a real episode in Arizona history…. As in the preceding episodes in the series, Webb effectively evokes the beauty of the Arizona desert.” ( Booklist)

This is the fourth in the Lena Jones series of a Scottsdale Arizona private eye. Here she is hired to provide security while a documentary is being filmed involving the escape of German POW’s from a prison camp in Arizona. The same night of the escape, a family was slaughtered in their home. The only survivor, a son, was blamed, and tried for the crime but was not convicted. However, his life was ruined because everyone, except the jury, believed he was guilty. Now, 60 years after the original event, one of the Nazis who was in that camp, who escaped that night, and who was allowed to emigrate to America because of his scientific prowess, is murdered. No one likes him. He still loudly proclaims his Nazi principles and loudly proclaims the Nazi views of minorities. There has always been a theory that he and the Germans who escaped during the war were responsible for the death of the family. And now, in addition to her job providing security, Lena is dragged into determining who killed the Nazi because his caretaker, an Ethiopian immigrant is being blamed. Then, two more persons are murdered, Lena thinks, because they know too much about the case, and Lena’s own life is in danger. Her oldest friend, a police detective, is retiring and moving away, and her best friend and business partner is getting married and moving to another company where he’ll make more money. Lena indeed has lots to deal with in this book. The book continues to provide us with Arizona scenery and interesting characters.

This was a well-written and well-performed book with a complex female character. The narrator, Marguerite Gavin, is one of the best that Audible uses. Story line was interesting with lots of twists and turns.

by the way, the numbering of the books isn't accurate. This is #4, but Desert Cut is #5, Desert Lost is #6 and Desert Wind is #7. Hopefully Audible will correct this typo.