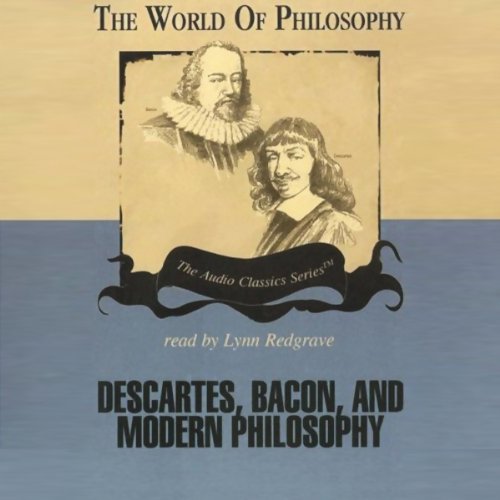 These two great 17th-century philosophers aimed to break free of oppressive traditions. Free scientific inquiry led them to skeptically question everything, though they also tried to reconcile science with religious faith. Both Descartes and Bacon extolled the individual, arguing that the human mind can penetrate the deepest secrets of existence. Their ideas formulated the problems that would occupy philosophers for the next 300 years.

The World of Philosophy series is a dramatic presentation, in understandable language, of the concerns, questions, interests, and overall outlook of the world's great philosophers and philosophical traditions. Special emphasis on clear and relevant explanations gives you a new arsenal of insights toward living a better life.

Very captivating I loved every second of it

Amazing presentation, very well thought narration and depiction of the modern philosophy as enlightening and as brief as it can be thank u

Very detailed (and accurate) summary of Descartes's philosophy. Much less info about Bacon.

The book itself is decent. Easy to follow and explained in enough detail and difficulty for a layperson to read/listen.

The huge problem with the audiobook version is the chosen narration style. It is NOT the narrator themselves. The lady narrating is very good. What sucks is when someone is quoted there is a cartoon style voice role playing their lines. Cheesy accents based on stereotypes are used to quote the person who are being quoted. It is unbearable to listen to.

This particular audiobook deserves 1/5. The contents of the book are ok.

Though informative, over three-quarters of the treatment is concerned with Descartes, leaving very little room for Bacon and leaving Modern Philosophy as an after thought tacked on as a closing paragraph. There's also problems with the recording at certain points throughout making it quite irritating to listen to at times.

If you want to learn more about Descartes than Bacon this is probably good as an introduction, but don't expect much else.