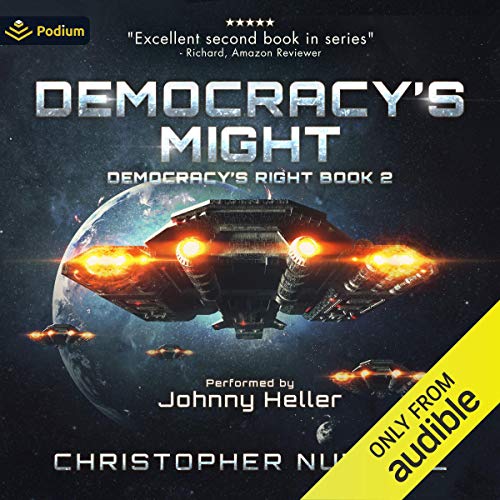 The rebels have won a great victory, shattering the Empire's grip on Sector 117. Starships are mutinying, the Empire's power and authority are crumbling, and the rebels are making their way towards Earth. Their victory seems inevitable.

But, as news of the rebellion finally reaches Earth, the Thousand Families start preparing for all-out war. The Empire has a war leader, a colossal advantage in firepower, and the determination to do whatever it takes to destroy the rebels before they can win.

As both sides rush towards a titanic confrontation, they know that whoever wins will inherit the Empire. But, with humanity's mighty civilization threatening to collapse, they may only inherit a desert called peace.

2nd Half of a Story Well Told!

Wow. I wrote a stellar review of the first book before listening to the second book in just two days. I said the first book was a story well told before moving on to book two. Nuttall finished this book just as well as the first completing a great story. He foreshadowed some ideas that never came into play keeping the reader thinking. At times you could feel for both sides of the battle.

I never write (anymore) reviews that contain spoilers. This story unfolded easily and wonderfully. Both the heroes and antagonists at times could be liked. A few characters could be hated and as a story of revolution, many seemingly changed.

I read one review that said the story was jumbled and told from too many points of view. I completely disagree. The various views provided insight into both sides of the struggle. I believe this will be the last book in the series, although it could go on, I doubt it will or should.

Nuttall did a terrific job between the two books in the series to unfold any background or history the reader needed to know while telling the story. It was a masterful piece of writing in my opinion. I primarily read Science Fiction, with occasional forays into other genres. I said this in my review of the first book, which is really the first half of the story, if a person only occasionally listens to Sci-Fi novels, this would be an excellent choice.

Everything was nearly believable in the way of technology. The one thing that all space-based Science Fiction has to have is a way to travel faster than light. Warp drive for Star Trek and various other ideas in other constructed universes. Since a the massively award-winning book "A Wrinkle in Time" (now celebrating its 50th anniversary and being made into a new movie) Science Fiction has had to depend on some way to get around Einstein's Speed of Light "speed limit" to have any way of going to other solar systems. Beyond that, much of the technology seemed quite believable.

The characters in this story even struggled, unlike many such novels, because they did not have faster-than-light communications. News about what happened on the rim of known space in this created universe would take 9 months to a year to reach Earth. Adds nicely to the plot as the story unfolds.

I highly recommend the story, which means buying two books. If you like military Sci-Fi with a good story well told, this is a book set not to miss.

this is a good book. good story line & performanc

I enjoyed the storyline. I always like when good wins over evil. The universe is run by 1000 families, similar to the mafia and finally they are over thrown by the people they oppressed. lots of good space action.

It was really great

Compared to the first book volume 2 seemed rushed. It jumped too quickly and tried to tell the story from the view of too many people. The story became hard to follow quickly and is the first book written by Mr. Nuttall that I was happy for it just to end. The narrator was once again wonderful.

It was all a little bit too easy. The story was really just a march forward. goal 1 goal 2 etc.

Some interesting bits with characters.

This was a fast paced book that seemingly introduces a new twist and plot. We get fulfillment of victory and anticipation of new enemies and challenges.

Can't wait for the next

I enjoyed this one a lot more than the first book in the series. My only nagging complaint is the short space battles. They could use a lot more fleshing out!

one of Nuttall's best.

The Democracy's Might series is possibly the best of Christopher Nuttal's work. Fresh and exciting, this book builds brilliantly on the first.

One of his best

An enjoyed story line, with none of ineffective ramblings some books proceed to bore you with. A great story line.