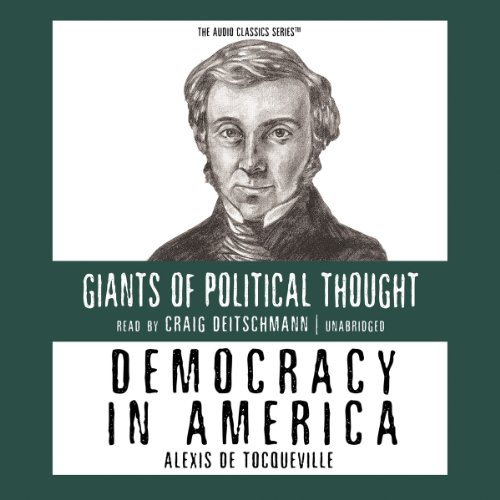 Alexis de Tocqueville, a young French aristocrat, captured the essence of nineteenth-century America in his penetrating work, Democracy in America. The democratic concept of equality was emerging as a political reality in America, and it threatened the aristocracy of Europe; it produced a society of individualists hungry for self improvement. In this classic treatise, Tocqueville weighed the advantages of democracy against its dangers. He asked: Is the tendency toward equality a tendency toward liberty? Can the majority be restrained to protect the freedom of individuals and minorities?

In pondering these questions, Tocqueville presented an unsurpassed picture of American government, culture, and attitudes. He proclaimed a new nation with a new theory of human interaction: America, ruled by the will of the majority.

Not bad, not great

I thought that this would be a full reading of the actual book, since the title read "unabridged". However, it turned out to be a spoon-fed narration of the major points of the book. I did not mind the corny French accents that were used whenever Tocqueville or other French individuals were supposed to be speaking, but I found them unneccessary and somewhat annoying. Overall, I give the title 3 stars, but it's hardly an "unabridged" reading of the book.

It looks like the general consensus is disappointment so far. I also mistook this for the real deal and I think it is somewhat misrepresented in the description.

NOT a READING OF THE BOOK

I was a bit rushed when downloading this book so I thought I must have clicked the wrong selection when I listened to the program. I should have noticed that the author of the work was not, as it should have been, Alexis DeTocqueville. Also, the playing time was too short to cover the work. The selection is a cursory look at DeTocqueville's work. It did provide some insight into how the work was viewed by DeTocqueville's contemporaries but I found most of its observations shallow.

Tocquille's work is superb. This bird's eye view of his work is nonetheless destined to a hurried sloppy college student.