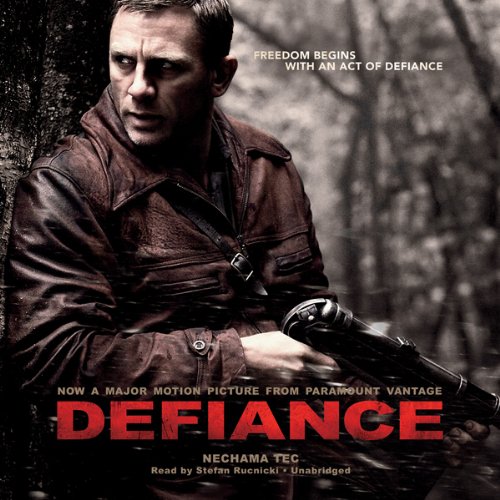 The prevailing image of European Jews during the Holocaust is one of helpless victims. But in fact, many Jews struggled against the terrors of the Third Reich.

This is the riveting history of one such group: a forest community numbering more than 1,200 that carried out the largest armed rescue operation of Jews by Jews in World War II. Nechama Tec reconstructs the amazing details of how these men and women of all ages - hungry, largely unarmed, and exposed to harsh winter weather - managed not only to survive but to take on the dual role of fighters and rescuers. Under the guidance of their charismatic leader, Tuvia Bielski, they smuggled Jews out of heavily guarded ghettos, led retaliatory raids against Nazi collaborators, and offered protection to all Jewish fugitives who could find their way to them.

©1993 Nechama Tec (P)2008 Blackstone Audio, Inc.
"One of the most elevating and inspiring stories in the chronicle of death and despair that is the Holocaust....an accomplished and startling work of Holocaust documentation." ( Los Angeles Times)
"An exciting story of rescuers and fighters - a story that should have been documented years ago....Defiance will no doubt engender further interest in the subject of Jewish partisan activity." ( Social Education)

This is a brilliant social history of a Jewish resistance movement in Belarus and Eastern Poland. It focusses on the Bielski partisan group lead by the three Bielski brothers.

What made this partisan unit different from the others active in the area was the fact A) they were Jewish and B) focused much more on saving lives than on attacking the Germans. Their efforts eventually resulted in the saving of more than 1,000 Jews.

The book is a standard social history that tackles its subject in a thematic rather than a narrative style. This makes the book less accessible. This is not a piece of popular history but is intended to be read by scholars who have made a study of the Holocaust or the Jews. The result is that the book can be hard to follow at times as it does not strictly follow a chronological format. Additionally, the book seems repetitive as the author supported his assertions with a large number of examples many of which are very similar.

This is a stunning piece of scholarship with the information presented logically and clearly in a remarkably evenhanded manner. This is done at the expense of readability and accessibility. Therefore, I would not recommend this book to the casual reader but to the serious student of the subject.

The good part of this book is that it is uplifting. It describes real people in a practically impossible situation who endure and survive by relying upon ancient moral principles (although there are several morally ambiguous incidents). The bad part is that it is organized and largely written as an academic paper. It is not narrative. That is, it doesn't tell a story in a chronological manner but rather is organized on a thematic basis. This results in two problems: 1) there is a great deal of repetition and 2) the great inspirational adventure story this should be is hidden behind this academic objectivity. You have to squint to see a glimpse of the heroism and the humanity of these people.

As a Jew, I was captivated by the book. I then saw the movie which was pretty darn good too.

Great Story, could have been told better

The raw material for this story is just riveting, which makes the flaws in the narrative that much more frustrating. I particularly found the discussion of some of the difficult moral choices the partisans had to make to be compelling reading.
Let me also say, I remember well being in 8th grade and reading Night by Elie Wiesel and feeling, forgive me if this sounds like blaming the victim, but feeling angry with the passivity of those who went into the gas chambers without a struggle. This book not only shows another side of the story, but it provides a very convincing, and heart-tugging discussion of why some didn't resist.
My only critique is that it is written more as research paper than as a story. For example, Chapter 11 is entitled (paraphrasing) "The Formation of New Social Structures", and discusses, well, social structures among the Bielski partisans. It seems to me a more inventive author would have woven that in to a narrative.
Certainly, this is a book I heartily recommend. It is easy to say "we must never forget", but a book like this is important to ensuring that we consciously remember the holocaust, rather than simply have it locked in the recesses of long term memory.

This is not the book for you if you are expecting another "Schindler's Ark". In theory there are parallels - an untold and uplifting tale of heroism in the Holocaust; an unexpected and (in theory) intriguing hero; a dramatic film derived from the book. However, these comparisons don't hold up to examination ans experience. Whilst the film isn't too bad (but not close to a "Schindler's List ") and it prompted me to want to read the book behind it, the book itself is pretty dreadful. How it desperately needs the talent of a Thomas Keneally to bring it alive. I am glad I chose to access it through the audio book because Stefan Rudnicki's reading helps give the story some life and colour which is sadly lacking in the text - it is a tedious laundry list of the movement and interaction of the Bielski Partisans with other partisan groups. It is repetitive and it's handling of Tuvia Bielski is poor. There is no real sense of the man himself and whilst many reviews suggest the author's approach is academic, I found her handling of the central character more akin to fan adulation than serious academic analysis. Overall, a disappointing experience.

Dry writing doesn’t do justice to the story

2.5 stars Defiance is the true story of a group of jews who survived World War 2 hiding out in the forests of Belarus. Although there were other otriads of partisans, the Bielski Otriad, led by the the three Bielski brothers was the bravest. They would accept any jewish person - young or old, fighter or not. This book is very difficult and dense to get through. It can sometimes feel like a list of facts, which, I think, doesn't do justice to how brave these people were and what insane, horrific times they lived through. The author talks about interviewing many survivors, including an interview with Tuvia Bielski before he died and I think the book would have been greatly improved by adding some of their feels about that time and also maybe a section about what the 1200 survivors went on to do. The most powerful moment of the book was a quote from Tuvia about how they would take any jew and were prepared to die for them, because then they'd at least die like a human being. Certainly a sentiment to think about during these times.

I have not listened to an account of Jewish people during the Holocaust yet... hearing what they went through... read aloud ... it hits a person in a way that film/interviews do not.

The story was fantastic and new material for those how know nothing about Jewish resistance during World War II and the narrator was extremely easy to listen to as well.

Their story was amazing and I'm so happy this happened and that this author gave voice to the tuvia's story.

If you aren't a history buff, or are expecting the excitement of the movie, then this is not the book for you. I read this so that I might understand the history behind the movie, and this book delivers. I thought the narrator was perfect for this project, as he was born in Poland, which is the setting of this story.

At points the book seemed dry because I was unfamiliar with location names, but I was able to get back into it and never considered giving up on it.