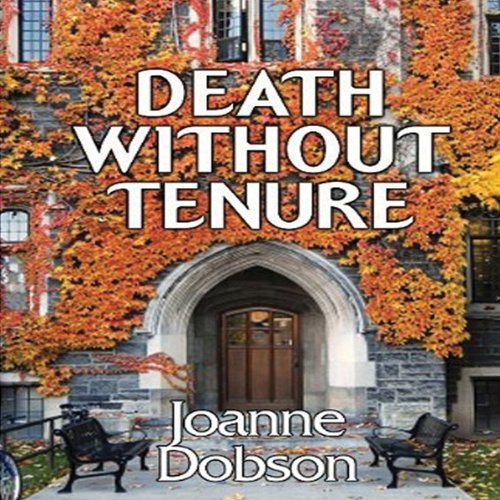 Professor Karen Pelletier is about to realize her dream. After six years in the English department at New England's exclusive Enfield College, she is up for tenure. Then Professor Joseph Lone Wolf, her rival for the one tenured spot in the department, whose ethnicity gives him minority-preference status, is found dead from an overdose of Peyote buttons. Karen, first on the list of suspects, is harassed by a homicide cop with a grudge against his colleague, the love of Karen's life, Lieutenant Charlie Piotrowski.

On campus, political passions rage. Two of Karen's favorite students, Khalida Ahmed, a hijab-wearing Muslim, and Hank Brody, a coal-miner's son on full scholarship, are caught up in the furor.

Without the presence of her beloved Charlie, now serving a tour of duty in Iraq with the National Guard, will Karen be able to survive the investigation, protect her students, and find a permanent niche in the world of academia? And what if the killer feels the need to strike again?

Joanne Dobson teaches English at Fordham University. Her first Professor Karen Pelletier academic mystery was an Agatha Award nominee. She and her husband live in the New York City area and have three grown children.

"For a modern mystery of academic proportions, you can't beat Joanne Dobson's series!" (Mystery Lovers Bookshop News)
"Publish or perish has never had such personal meaning....Dobson has created an attractive heroine with the courage and wit to take on the toughest adversaries." (The Dallas Morning News)

First of all, if you have anything to do with academia, especially with the humanities, do not read this book. You will be annoyed out of your mind by each new sentence. I'm not sure what kind of higher education reality this story is supposed to represent - the action is clearly set in the past, seeing as Facebook is a novelty and every file need to be painstakingly printed out on a slow printer - but even a few decades cannot change soften the shock from the collection of (poorly developed) characters. The faculty of EngLit seems to be a very shallow and stupid bunch.
Anyway, the detective story itself is also badly written and fails to grip the reader at any point. The victim is unlikeable, every character in the book is a suspect, but we do not care. Honestly, do not waste your time. This book doesn't work even as light trash reading