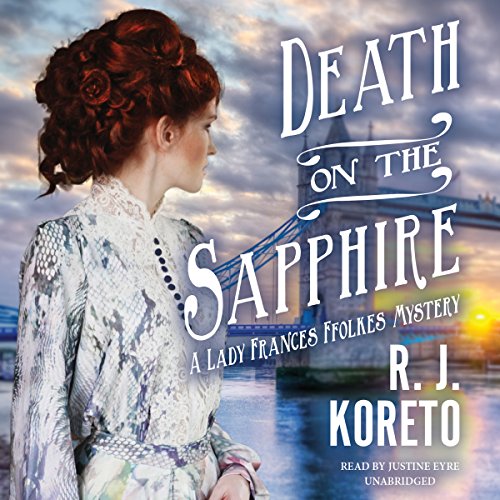 An extraordinary woman living in extraordinary times, Lady Frances Ffolkes is an Edwardian era suffragette who has an uncanny ability to attract danger and romance.

When Major Colcombe, a family friend and war veteran, dies under mysterious circumstances, the good lady discovers that he was working on a manuscript, about South Africa's bloody Boer War, that reportedly revealed a scandalous mistake that cost many innocent lives. Now it's up to Frances and her loyal lady's maid, June Mallow, to track down the missing manuscript and bring the killer to justice. Despite kerfuffles with Scotland Yard and the British secret service, Frances never backs down and finds herself in several very unfortunate positions - and one very fortunate love triangle.

Death on the Sapphire is R. J. Koreto's witty and winsome debut of a series that is sure to be a fan favorite for years to come.

This is one of my favorite books, and I was thrilled to find it on audible. The reading is crisp, flows nicely, and the voices are very well done. I enjoyed it very much and look forward to listening to Mr. Koreto's next installment, Death Among Rubies.

I really enjoyed listening to this story. I admit to me there were times I wished they would get on with the mystery but the actual story outside of the mystery was charming. There was something about the narrator’s way of ending her sentences that bothered me for a bit but after the story got going I barely noticed it anymore. I’m going to start listening to the next book as soon as I finish this review.

At last, a reading was pleasant to listen to and not overdone with falsetto voices and arch tone . Ms. Eyre is a delight to listen to.

The Lady and a Mystery

This was such a fun mystery with many twist and turns. With an exciting journey for A Lady and her maid to find themselves in the middle of murder and crime that needed solved. The characters were described and brought to life by this author. So much so it felt as if it all played out right in front of me.
Enjoy

Liking this new series, especially the twist on the faithful butler, with, finally, a faithful, clever, resourceful lady's maid.

Not typical, but well researched and thought through. No loose ends….Easy to follow. Highly recommend!

Good balance of adventure and a little romance. I always enjoy this narrator she constantly adds polish and enjoyment to the story. I look forward to listening to the next book in the series and hope for the same narration.

This was a most entertaining and clever story!!! Highly recommended- I do hope there are more books to follow about Lady Francis! Miss Frinnie Fischer would be proud to be her friend!

The story is well done! The characters of Lady Francis and her maid are clever and speaking.

This is a delightful story filled with large, lovable characters. I adore Franny, the main character. The Sherlock Holmes style is entertaining and was accomplished very well. I look forward to reading more in the series!