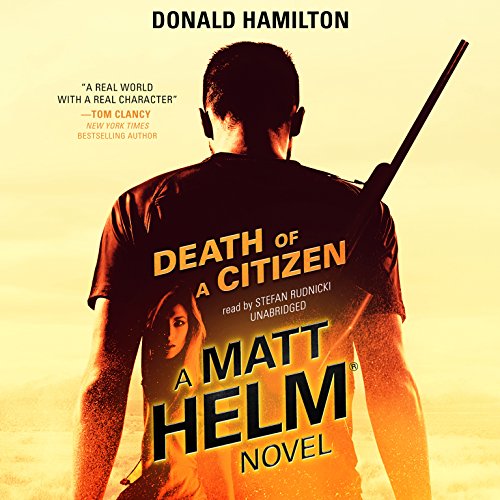 The first installment in the legendary Matt Helm thrillers

Matt Helm, one-time special agent for the American government during the Second World War, has left behind his violent past to raise a family in Santa Fe, New Mexico. When a former colleague turns rogue and kidnaps his daughter, Helm is forced to return to his former life as a deadly and relentless assassin.

Great tension... and that VOICE!

Would you consider the audio edition of Death of a Citizen to be better than the print version?

Didn't read the print but i really appreciate the reader. It was weird when he was speaking as a woman (when is it not?) but beyond that... man. Just perfect. Greatly added to my experience. Especially considering Helm's pragmatic disposition.

What other book might you compare Death of a Citizen to and why?

Casino Royale. Obviously. Endless parallels. The vixens effecting the protagonist, the callous protagonist, both spies blah blah blah. Helm is essentially retired here where as Bond is still operating. Bond is presented as monster then stripped into a man. Helm is presented as a man and abruptly revealed to be a monster.

The climactic portion of the hotel because it was a moment where the tension exploded.

Matt's savagery and directness during an important scene. It really shows his "shoot first, talk... eventually" training. He his very decisive and does not flourish just because " thats what cowboys do" or "a speech would sound good here".

A more than decent story. The ending wasnt as exciting as id hoped but the build up was fantastic. Matt was believable and consistent in his ideals methods so it made him feel more real. I felt like the world bent around him. Rather than "Our hero" changing bit by bit to make him more human or relatable. Matt is a force. The reader is more than noteworthy!

I have been a fan of Matt Helm for a lot of years, read them all multiple times, and even purchased the new one that was done by someone else (War years?) so when I got this I was afraid that the voice would not be what I expected Eric to be.

But let me say that I'm extremely impressed with his work on this book! Thank you very much for doing this and for doing the series.

If you have not read Matt Helm he's an ex spy and if you had him meet Mr Bond by the time that James introduced himself Matt would have shot him or used his knife on him. He does not pull any punches and is just a fun read.

lets face it, it's Helm!

to be perfectly honest, the guy reading this book, does not seem to be misreading anything in the book, its all there! surprisingly how adult ,slight smokey voice, sounds about the right age that Helm would be, perfect mesh of book and reader,really with this audio version giving you the works, makes you wonder why you need to actually read books any more, just exactly right!!

New to the series.

Really enjoyed this story and will be buying the rest of the series. I like it more then the Bond books.

Not the Matt Helm you're thinking ...

Where does Death of a Citizen rank among all the audiobooks you’ve listened to so far?

Yep. Loved Helm's being torn between two worlds. I enjoyed the grittiness of the writing; so far from the Hollywood Dean Martin movies as you can imagine.

Top of his game. He's always amazing. Could read my grocery list.

Book is too short! I'm on to the next in the series.

A very pulpy and serious story, not at all like the terrible Dean Martin movies. Think Ian Fleming's Casino Royale'. Like if Bond had been American and retired and then got drug back into espionage. It's a cool story, well narated by Rudnicki, who has a harsh quality to his voice that works well in this ruthless story.

My first thought as I listened to this was that this thing is as dull as can be. Granted, it didn’t really pick up in pace or really change in story line. But it did get better. I was curious hi different it was compared to the movies. I fully realize that those Dean Martin flicks were pretty campy and unflinchingly stupid. Most of the spy movies of the sixties were. Still, it is a start.

How did I miss this?

My knowledge of Matt Helm was limited to Dean Martin’s movies. This was a pleasant surprise as it is gritty story more in the vein of Travis McGee or Jack Reacher than spy parody 60’s movies. Only thing I did not like was how the ending hangs. On to the next one.

Good start to a long series

This is a series of over 20 books that were written from 1960 to 1993. Nineteen of them are now available on Audible. They're short books - most of them just 5-6 hours long. However, the first 18 of the books are available in the Audible Plus catalogue, and therefore free, if you are a member with audible plus privileges. (I wouldn't spend a credit on a 5 hour book.)

I listened to this first book as a flyer - nothing to lose - and I really enjoyed it. The fact that the book was written 60 years ago was rarely an issue, and when it was, it didn't affect the book. I am going to continue with the series and see where it goes.

Several folks have said Matt Helm "is a grittier James Bond", but I don't see that at all. Perhaps the movies were, but I don't think this book is anything like a James Bond book. I am a Jack Reacher fan, and this book reminded me a lot of Lee Child's Jack Reacher. Matt is a retired trained killer and pretty much a loner. He doesn't have super powers, but he thinks things thru carefully figures things out via observation skills. There is a lot of "internal thought" by the main character, Matt Helm, just as there is in the Jack Reacher books. Things do not move real fast, so if you're looking for non-stop action, this isn't for you. But there is action, and the action is the result of careful thinking and observation. I'm looking forward to book 2, which I'm about to start.

I enjoyed this first installment of Matt Helms. I must admit, it moved a little fast for me, so at times I had to rewind segments or chapters to understand what was happening. Still, I am ready for Book 2. Stefan Rudnicki's voice is everything!