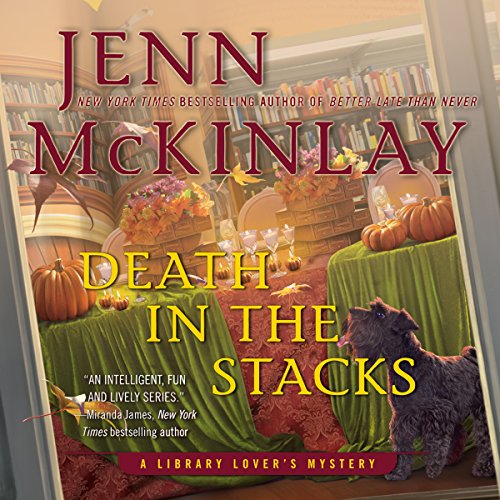 Lindsey Norris and her staff are gearing up for the Briar Creek Library's annual Dinner in the Stacks fundraiser. The night of dinner and dancing is not only a booklover's dream - it's the library's biggest moneymaker of the year. But instead of raising funds, Olive Boyle, the new library board president, is busy raising a stink and making the staff miserable.

Although Olive acts like a storybook villain, Lindsey is determined to work with her and make the event a success. But when Olive publicly threatens Paula, the library's newest hire, Lindsey cracks like an old book spine and throws Olive out of the library.

The night of the fundraiser, Lindsey dreads another altercation with Olive - but instead she finds Paula crouched over Olive's dead body. Paula may have secrets, but Lindsey and the rest of the crafternooners know she's not the one who took Olive out of circulation. As the plot thickens, Lindsey must catch the real killer before the book closes on Paula's future....

Murder in the library

In Death in the Stacks by Jenn McKinlay, the Briar Creek Library is about to have its big annual fundraiser, Dinner in the Stacks. But then Lindsey, the library director, has to deal with Olive Boyle, the new library board chair who seems to think her position makes her the boss of the library. She demands that the caterers provide their food for free in addition to serving as a favor. She makes the florist redo her arrangements because she thinks they are not up to the proper standard. She also announces that she will institute a new dress code, which will prevent Beth, the children's librarian, from wearing costumes during her story time. And she tries to fire Paula, the assistant librarian she seems to hate the most. But when Lindsey stands up to Olive in pointing out that she alone has authority to fire staff, Olive announces that she intends to make the board remove Lindsey.

One fun detail is that McKinlay brings the characters from her other series to the Dinner in the Stacks event. First we see the members of the Hat Shoppe series, set at a milliner shop in London. We get to meet the entire cast of the series, including the most significant characters Scarlett and her cousin Vivian, who own the Mim's Whims, and Harrison their business partner and Scarlett's boyfriend. In addition, we see Fiona, Vivian's apprentice as well as Andre and Nick, the gay couple who live near Viv and Scarlett. They show their love of puns and are thrilled to have Lindsey join in the jokes.

In addition, the characters from McKinlay's Fairy Tale Cupcakes series, also come to the fete from Scottsdale, Arizona as they are visiting Briar Creek to open a new franchise in the town. So we get to see Mel and Angie, who run the cupcake shop, as well as Tate, Angie's fiance; Joe, Mel's boyfriend; and Oz and Marty, the assistants at Fairy Tale Cupcakes. Those people have a love of quoting movies and are impressed by Lindsey's completing one of their quotes.

After dinner, Olive forces her way to the microphone to air her vast grievances against Lindsey, but it backfires when members of the audience interrupt to congratulate Lindsey for thinking outside the box. The tirade ends only when Sully, Lindsey's boyfriend, pulls the plug on the microphone. Soon Olive tells Lindsey that she will have no trouble getting Lindsey fired because she has dirt on everyone she knows and can force the board to do her bidding.

As the fundraiser comes to a close, Olive's friends can't find her, so Lindsey looks for Olive and finds her in the fiction section, stabbed to death, with Paula, the victim of Olive's worst attacks, standing over her holding the knife. After promising never to get involved in a new investigation the last time a murder arose, Lindsey tries hard to stay out this time, but with pressure from Robbie and even Miss Cole (a.k.a. &quot;The Lemon&quot;), head of circulation at the library, she soon gives in, and she starts to work to defend Paula.

It was fun to get to meet old friends from Briar Creek, but I especially loved seeing the friends from London and Scottsdale come to visit. Things got a little confusing at the conclusion, especially while I was trying to keep all the characters straight. As usual, the strength of McKinlay&quot;s writing is in her terrific character development. Her characters seem so real that we expect to go to Briar Creek and meet everyone in the town. Even the minor characters usually come to life, meaning that the major ones really seem true people. I really enjoyed the interplay between the actor Robbie Vine and Police Chief Emma, who are now a serious couple and really enjoy their banter, which makes fun for the readers.

Allyson Ryan performs the audio edition of this book and does a good job of making it come to life. She uses appropriate expressions and keeps the book moving. I enjoy her way of voicing the characters and adding flavor to the book.

I liked Death in the Stacks pretty well. I would have liked to see a little more of the cupcake team, whom we only really see at the fundraiser. If McKinlay is going to pay the airfare for all 6 of the team to go to Massachusetts, she might as well let them spend a little more time there! :) But overall, this book gave a fun experience. The Library series is my favorite of McKinlay&quot;s three cozy mystery series. I give this book four stars.

The author incorporated all 3 series in a story that kept me up all night! It was spectacular!!

Spoiler: I loved the characters from the Cozy Hat and Cupcake mysteries visited the story. I wish the narrator from the other stories were included voicing those characters. This narrator was challenged by all the voices. This is the first of the Library series I listened to instead of reading. I have only read this series before this title. I am annoyed how the author's characters run into danger and then need to be rescued. The stories are fun and light and that's what I am looking for and I'm a librarian!

I’ve been reading the library lovers mystery series in order and this one is my favorite thus far. I love how the characters from Jenn McKinlay’s other two series make a cameo in the book. I also love how “the Lemon” becomes less sour in this book.

This is a great series and fun to read it listen to. I highly suggest the series.

I love all of Jenn McKinlay’s books and especially this one when all the characters make a presence. Please write more! Excellent narration from Allyson Ryan.

Great story. Didn't figure this one out!

Yes I would recommend this book to a friend. it's a great story.

What was one of the most memorable moments of Death in the Stacks?

I love how she brought the characters in from two of her other book series!

She has good character voices.

This series is wonderful!

A big thank you to author Kate Carlisle for the recommendation.
Th

I particularly enjoyed the narration of this book. I couldn’t stop listening.

one for your stacks

I really enjoy this series. For me this did not disappoint. I love how she brought in characters from her other two mystery series. I enjoyed how she played a good game of misleading and shifting idea from one person to another.