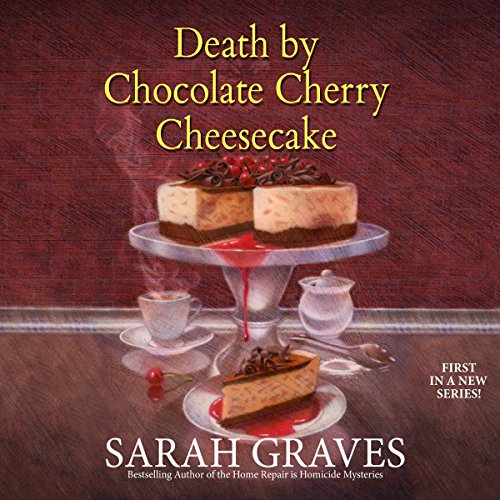 Jake and Ellie have been through a lot together, from home repair to homicide investigation. So when they decide to open a chocolate-themed bakery, they figure it'll be a piece of cake.

With Ellie's old family recipes luring in customers, they expect to make plenty of dough this Fourth of July weekend. Having family home for the holiday only sweetens the deal for Jake - that is, until the ill wind of an early-season hurricane blows up her family's plans.

But as bitter as the storm is, something even more sinister is brewing in the kitchen of The Chocolate Moose - where health inspector Matt Muldoon is found murdered. Ellie never made a secret of her distaste for Matt, who'd been raining on their parade with bogus talk of health-code violations. But now, with no alibi for the night of the murder, she's in a sticky situation with the police - so it's up to Jake to catch the real killer and keep Ellie living in the land of the free.

After Jacobia's clan has fixed almost everything fixable on the old house, Jake and Ellie are now gonna become bakers? We knew Ellie was, but who knew Jake was interested in baking? Oh well, story is still a well written, engaging murder mystery. Just glad Sarah Graves figured out a way to keep murders happening in Eastport without decimating the town. She even tossed in several new & future characters..
Unfortunately, Lindsey Ellison is a more versatile narrator when it comes to different regional accents.. Susan Boyce does the different characters well, but doesn't give them "Down East" flavor. I know what folks there sound like because I still have relatives in the area.

Susan does a great job reading the book. As usual Sara keeps us guessing the end. We lived it.

Sarah Graves has crafted a great beginning to a new series. Characters are well developed, and seem like friends. This installment really left me wanting more. Susan Boyce brought it all together with her nice performance. I recommend this to cozy mystery fans.

I AM A FAN OF THE ORIGINAL FIXER UPPER SERIES, BUT LOVE THE NEW FOCUS AND DEVELOPMENTS WITH THE CHOCOLATE SHOP AND SAM'S NEWS. FUN READ, GREAT READER.

Jake and Ellie are back

The Home Repair series by Sarah Graves is one of my favorite cozy mystery series. So, I was very happy to see Jake and Ellie return with a new twist. All of the characters that I enjoyed from the first series are included in this story as well. As always, the story is full of action with a fast pace. I can't wait to see what happens next. I also hope that Lindsay Ellison returns as narrator. Susan Boyce can't do a New England accent.

This story is set in: north western U.S.A. in a vacation town. The Characters are believable, for the most part. Some are a bit in left field (walking into danger without thinking).

Eastport, a small town over populated with tourist and the bakery take center stage. The two owners of the bakery are in the middle of a dilemma, when they find a murdered man in their bakery-- the murder investigation begins. At the same time, a major storm leaves the small town's sheriff busy, providing emergency shelter for those that couldn't get away from the storm. But the investigation must continue, or it looks like an innocent will be charged with murder.

I listened to it twice--just to make sure I caught all the action-- (there were many sub stories playing out along side the murder and the storm).

You will be pleased with the drama and the twists an turns make for fun. Good read/ listen that is well worth the credit.

Susan Boyce was an excellent Narrator

I will be purchasing book 2.

I’ve already listened to the previous series featuring Jake and Ellie. Lindsay Ellison’s narration of those books was superb! Susan Boyce is somewhat staccato in comparison. But the story was Sarah Graves’s stellar work!

This book had the opportunity to be an entertaining read but because of the sloppy attention to detail and inconsistencies by the author it left me irritated.

always a great read by Sarah graves. love the new

Always a great read by Sarzh Graves. Love the new story line. However, it does make me want to go to the bakery!

what happened to prill and monday, their old dogs, they act like they nevrr had any. I wss beginning to wonder about Lee too, until she showed up at camp, and poor George. not quite as good as the home repair series to me.