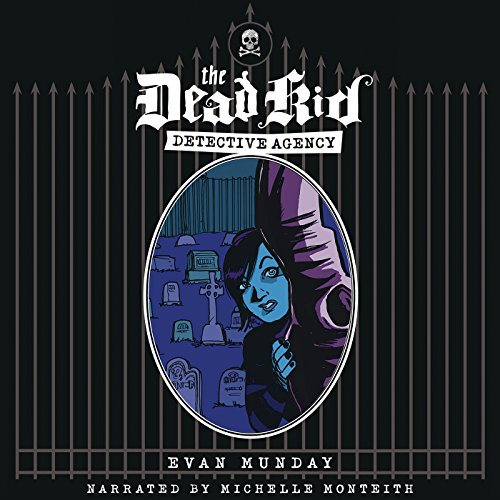 Thirteen-year-old October Schwartz is new in town, short on friends, and the child of a clinically depressed science teacher. Naturally, she spends most of her time in the Sticksville Cemetery, which just happens to border her backyard. And that backyard just happens to be the home of five dead teenagers, each from a different era of the past: There's the dead United Empire Loyalist! The dead escaped slave who made her way north via the Underground Railroad! The dead quintuplet!

Soon October befriends the five dead kids. Together - using October's smarts and the dead kids' abilities to walk through walls and get around undetected and stuff - they form The Dead Kid Detective Agency, committed to solving Sticksville's most mysterious mysteries. October's like Nancy Drew, if she'd hung out with corpses.

When Sticksville Central High School's beloved French teacher dies in a suspicious car accident, it provides the agency with its first bona fide case. Soon October and her five dead friends find themselves in the midst of a nefarious murder plot, thick with car chases, cafeteria fights, sociopathic math teachers, real estate appointments, and a wacky adventure that might uncover the truth about a bomb that exploded almost 40 years ago.

©2011 Evan Munday (P)2017 ECW Press
"This book would really appeal to kids who enjoy fantasy, and a twist of the grim. The concept is pretty dark, but the book doesn't go into too much gruesome detail. Even though October's circumstances are not cheery, her high school experiences will be familiar to many kids." ( National Post)

Yes. It was very enjoyable. Really liked the narrator

The ghosts were my favorite. They were just a great mix of personalities. Enjoyed there was more than one mystery which I'm assuming will be addressed in following volumes.

The different accents were well done. All the character voices were distinguishable.

This really is geared to younger readers but I enjoyed the story nonetheless.
It's relaxing to not have to worry about the constant love angst encountered in most.
Audible, anxiously awaiting the remaining books in this series.