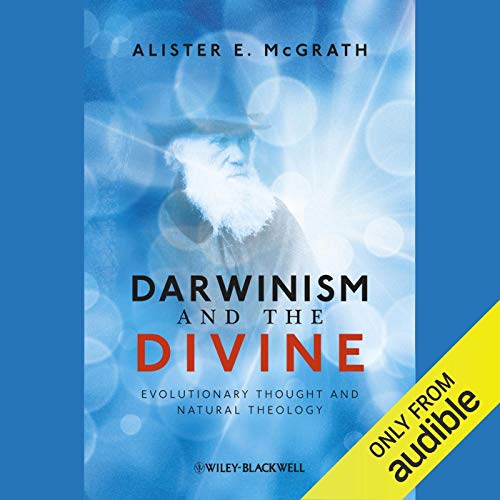 Darwinism and the Divine examines the implications of evolutionary thought for natural theology, from the time of publication of Darwin's On the Origin of Species to current debates on creationism and intelligent design.

A thought-provoking exploration of 21st-century views on evolutionary thought and natural theology, written by the world-renowned theologian and best-selling author.

What did you love best about Darwinism and the Divine?

He is clear-headed, is non-dogmatic, does not manipulate with rhetoric--just says it like he sees it, and is deeply insightful.

I loved how in one chapter he calmly, methodically tells you both why William Paley's arguments (which one might call Intelligent Design 1.0) were the result of a misunderstanding of natural theology, then in another chapter he politely eviscerates meme theory. He is insightful and fair-minded. Another example (actually, this is the background to his criticism of William Paley) is his discussion of how the approach to natural theology adopted by Protestants in England during the Augustan age originated in the Anglican desire to find a suitable response to the Catholic miracle-centered apologetics: a focus on the lawfulness, orderliness of nature, which might be called "divine contrivance." McGrath points out how wrong-headed this was and contrasts it with Thomas Aquinas's approach. Very insightful

My reaction to reading this book was the sort that one has to seeing something very beautiful: gratitude and appreciation

Conciliatory, while expanding the debate

Would you listen to Darwinism and the Divine again? Why?

I found this book very wordy, so it was sometimes hard to follow. I'd listen again just to understand the convoluted sentences. But I think it might also be better to read it and mark up a copy for reference.

The author really seems to bend over backwards to accommodate theism/Christianity to evolutionary theory. He doesn't seem to call evolution itself into question much; but I think that's because his purpose was to show how thinkers can reconcile established evolutionary theory with religious views. Still, I feel a little let down that he wasn't more rigorous in challenging the "science" of evolution.

A lot of the arguments also seem to center around how we moderns have changed the rules of proof. That bugs me because I wanted to find some form of certainty, and instead it seems like our current philosophy allows previously deniable facts to become proven if we just change the rules used to establish truth. Examples: Science no longer requires empirical proof, you just have to come up with a story that explains the observations better than other stories. Or logical positivism no longer applies; the rules for evidence are based on inference of design rather than "observed" design. Stuff like that. I need an entire course in philosophy to get at how we have chosen what is science and what is not.

Still worth a listen. But expect it to be a conversation opener rather than a set of answers.

Seriously, Audible needs to change this question for nonfiction books.

Which character – as performed by Tom Parks – was your favorite?

Tom Parks is a good reader, but one who needs to look up how to pronounce unfamiliar words. I think maybe he said "allele" wrong, and also had odd pronunciations for a few other words that I thought were quite common.

It made me sleep or lose attention sometimes because the author insists on passive voice and "academic" style. He could have made his points in about 1/3 of the pages he used had he been more concise.

this is a great book for anyone who kinda knows evolution is true but wants to accommodate that in their christian faith
it confirmed most of what i believed but would have saved me 5 years of thought and study if id come to it earlier
one sour note.. the narrator seems to not understand the broader sweep of the narrative.. he reads ok and inflects on a surface level ok but i found it hard to follow

This is a very clear presentation of why a Christian who believes that the theory of evolution is true should understand how this is consistent with bible teaching. At least that is how I understand what he's saying - its not explicitly presented in those terms . He seems very much at ease moving between complex scientific theories and on into historical sketches, philosophy and theology ,and his presentations on all these was clear and of a top of league standard. Interesting to look in depth a primarily protestant thinking in seventeenth to nineteenth century England towards natural theology. He appears to accept the generally accepted view re cosmic origins around 13 bya and some form of darwinian evolution and then compares them to earlier Christian views of creation that appear more compatible with this,especially those of augustine. What would be interesting would be to hear how he would address the claimed scientific reservations regarding darwinian evolution that are raised by young earth creationists and those of the ID creationists. Perhaps he has done that elsewhere or for a future book to be !