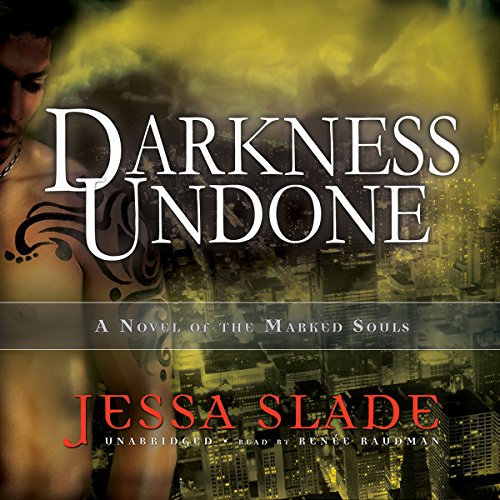 The war between good and evil has raged for millennia, and as a powerful new enemy ascends, the Marked Souls are pushed to the ragged edge.

Sidney Westerbrook has always studied darkness and damnation from a sensible distance. Now, to earn his place as a league Bookkeeper, he must discover why Chicago is such a battleground of soul-linked warriors. But the research becomes personal when he finds himself over his head and under attack—and at the mercy of a waif with demon-lit eyes and a deep yearning in her heart.

Alyce Carver has been alone longer than she can remember, battered by the living nightmares that haunt her city. Cornered by yet another gang of demons, she unwittingly joins forces with a handsome scholar who can salvage her past, and she in turn may be the key to his investigations. But she won’t let him go until he shows her everything she’s been missing. What begins as an experiment in possession becomes a trial by desire so powerful it threatens both their lives, even as it binds their souls.

Jessa Slade spent her childhood chore money on science-fiction and fantasy novels. Then she discovered romances, and the die was cast. Though a hopeless cynic, she secretly believes the flow of the universe can be positively altered by a well-told love story.

Audible makes this series even better

This is the fourth book in this series. I read the first three and liked them very much but as with most books, when you listen to them they are all that much better. I enjoyed this one very much.

Renee Raudman did a very nice job narrating the story. The voice work was very distinguishable from one character to the next and seemed right for the character. I'll look for her on other books.

Sigh now to just wait for the next one.

I enjoyed the complete series! Would definitely read books by the author again.The narrative was very well done !

Once again, Jessa Slade hit it out of the park! I hope she continues this imaginative series!

Love this series hope for more in this series!!!!! so I gave them five stars

Kinda stilted, this one. Great character development though. Just wasn’t interesting as previous sequels. Also, book isn’t available and, as performance wasn’t stellar, a necessity for me. Still, good series...

What does Renée Raudman bring to the story that you wouldn’t experience if you just read the book?

I love Renee Raudman. She brings everything to life and is good at differentiating between characters. The only thing that was a little off to me was Sidney. The accent seemed to come and go...and sometimes it sounded like Aunt Bea. I had just listened to Ilona Andrews "Magic Rises." before I started this series. I was still sad that Aunt Bea had died. And suddenly I am thinking..wow Aunt Bea didn't die....she is going to offer them some baked goods...wait a minute..what is Aunt Bea doing as the love interest for Alyce...oops wrong book. So I kept picturing her love interest as a middle aged, female, Bouda... I don't know...it may have just been me. But I would let some time pass before I listen to this particular book after listening to the Ilona Andrews series or listen to this series first.

When his father told Simon he was proud.

I like the fact that all of the characters are SO different and the females don't follow a cookie cutter pattern. I like the fact that they aren't doormats or perfect. I also think that the life of Alyce before she met Simon could make a really creepy ring-like movie..with the waif in white sneaking up to kick some phantom but and then vanishing...really creepy...