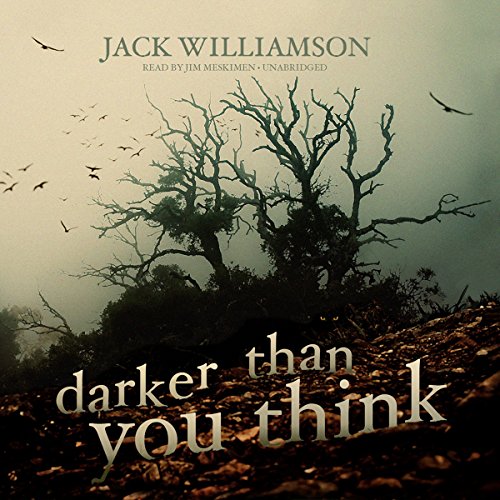 Who is the Child of Night? That’s what small-town reporter Will Barbee must find out. Inexorably drawn into investigating a rash of grisly deaths, he soon finds himself embroiled in something far beyond mortal understanding.

Doggedly pursuing his investigations, he meets the mysterious and seductive April Bell and starts having disturbing, tantalizing dreams in which he does terrible things - things that are stranger and wilder than his worst nightmares. Then his friends begin dying one by one, and he slowly realizes that an unspeakable evil has been unleashed.

As Barbee’s world crumbles around him in a dizzying blizzard of madness, the intoxicating, dangerous April pushes Barbee ever closer to the answer to the question “Who is the Child of Night?”

When Barbee finds out, he’ll wish he’d never been born.

Jack Williamson (1908-2006) published his first short story in 1928. The second person named Grand Master by the Science Fiction Writers of America, he was always in the forefront of the field, being the first to write fiction about genetic engineering (he invented the term), antimatter, and other cutting-edge science.

©1940 Street & Smith Publications, Inc.; 1948 by Jack Williamson (P)2012 Blackstone Audio, Inc.
“ Darker Than You Think yields sheer enjoyment, generating wonder and suspense as Williamson springs his sequence of trap doors with the effortless agility of a master.” (Peter Straub,  New York Times best-selling author)
“Outstanding fantasy [with] excellent plot design, fast-moving action, and suspense which explodes into high-tension horror.” ( Astounding Science-Fiction)
“Williamson’s story asks, not merely ‘How do you plan to fight a monster?’ but ‘Do you want to be a monster?’ - a much more disturbing question.” (William H. Stoddard, author of  Gurps Fantasy)

I found the characters a bit one-dimensional. Barbie, the main character, immediately meets a pretty reporter and instantly falls for her and betrays long-term friends without a thought. He does switch allegiances back and forth but lacks depth. The plot, while taking a new turn on the werewolf theme, is somewhat expected. The story attempts to take a new view of an old horror plot, but falls a little short with stilted dialog and shallow characters. However, the performance by Jim Mesklemen was very good. I thought the author did create a new variation on the werewolf theme and some of the plot elements were intriguing. The story felt like a first draft that could get better with some massaging of plot and characters.

I was surprised when I heard at the end of this novel that it received its original serialization in *1940* (and it's original book publication in 1948). All things considered, the venerable Williamson did a remarkable job of hand-waving his way through some of the concepts of theoretical physics at mid-century, coming up with a basically plausible explanation for witches and lycanthropes. I was impressed by the plotting, to be sure. The downside, alas, is that Williamson demonstrated his limited ability to use the English language in a sophisticated way. Although he apparently never worked as a journalist, "Darker Than You Think" feels very much as if it were written by a journalist from the 1940s. Rather than search for revealing, rich ways to express himself, Williamson defaulted time and again to the same, tired old descriptions. I will point out in particular that I had to stop *reading* the book, and eventually opted to listen to it, because of his egregious, repetitive use of eye descriptions as some kind of stand-in for character. On the printed page, I couldn't tolerate his tiresome description of April Bell's "long" and "green" (or dark) eyes, and the man simply was in love with the word "long" as a slightly off-kilter description of many things in the narrative. In other words, Williamson was a pulp writer, at least at that point. But you know, it was a fascinating book, and as far as it goes, well plotted. Implausible, sure, but that's no surprise. I genuinely admire his effort to wrap supernatural concepts in a blanket of theoretical physics. I confess that I found myself speculating about the identity of the big bogeyman at the center of the plot, and while Williamson did a nice job of turning my eye this way or that, I had a strong hunch who it was by midway through the novel, perhaps even a bit earlier. I applaud his willingness not to wrap the whole thing up neatly at the end. You'll see. The narrator was great, a perfect moderated "1940s radio" kind of voice that well suited the story. I love lycanthrope/werewolf stories, and unlike the vampire and zombie subgenres, there are surprisingly few truly "classic" shape-shifter works out there (I would argue that Stevenson's "Dr. Jekyll and Mr. Hyde" was among the first and best). So I think Williamson did a nice job here, and given that he wrote it in 1940 (!!), it's impressive and worthy of the library of any lycanthrope fan.

Way Ahead of Its Time

An intriguing premise and good narration is only held back by two annoyances. The main character continually waffles between allegiances. “I shouldn’t do this or that to X person.” The ending is also quite abrupt, which undercuts the fun slow burn leading to the climax. Nevertheless, I appreciate a great story from 1940 that was way ahead of its time.

Better than you think

this book was much better than I thought. I had heard it was well-written, but it is very well written indeed. The story is excellent and the premise is smart. It's a great choice.