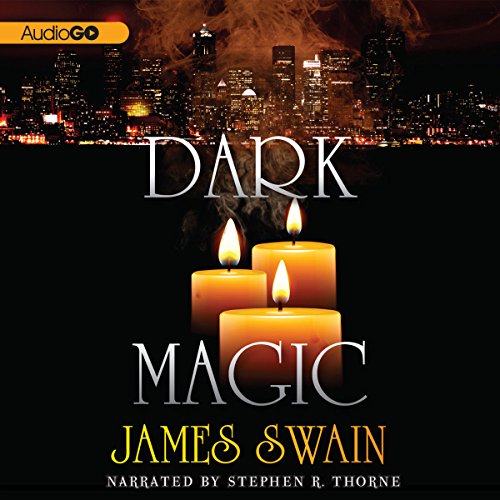 Peter Warlock is a magician with a dark secret. Every night, he amazes audiences at his private theater in New York, where he performs feats that boggle the imagination. But his day job is just a cover for his otherworldly pursuits: Peter is a member of an underground group of psychics who gaze into the future to help prevent crimes. No one, not even his live-in girlfriend, knows the truth about Peter - until the séance when he foresees an unspeakable act of violence that will devastate the city.

As Peter and his friends rush to prevent tragedy, Peter discovers that a shadowy cult of evil psychics, the Order of Astrum, know all about his abilities. They are hunting him and his fellow psychics down, one by one, determined to silence them forever.

Would you try another book from James Swain and/or Stephen R. Thorne?

Has Dark Magic turned you off from other books in this genre?

Have you listened to any of Stephen R. Thorne’s other performances before? How does this one compare?

The narrator's performance was good; however, sometimes I got the impression he was also struggling with some of the narrative/story line he was being required to read.

What character would you cut from Dark Magic?

Although I finished the book just this afternoon, I am already at a loss as to recalling character names. The girlfriend was just awful. She was supposedly pretty and a magician's apprentice, but every time the magician tried to explain that his powers were "real" she would balk and refuse to believe him and get mad and run off to live with friends. She even suggested counseling, after the magician told her he never confided in anyone before and his life and freedom depended on secrecy. Her response? Why, counselors are sworn to secrecy, right??? Ugh. Find a new girlfriend that is less childish and petty maybe? That has an imagination and maybe loves you no matter what?

The ending was a complete rip-off and the old "make everybody forget" spell does not include the entire city of New York, the press, television coverage, etc. Or the dead bodies left behind. How to explain them????? I feel duped and I wasted time listening to this and unfortunately, it did not get better with age. The magic system was unbelievable and there was nothing "Peter Warlock" (I'm not kidding) or the bad guys could not do. Don't waste your time unless you can suspend total belief in just about everything.

good story
I liked all of the characters except for his whiney bitch of a girlfriend. And Holly was not much better in that department.
The narrator was good in the sense that I did not notice him. All I heard was the story.

This is not usually my genre, but being a great fan of James Swain, I decided to try it. At the beginning I found it very interesting, but as the story progressed it began to drag until I thought it would never end.