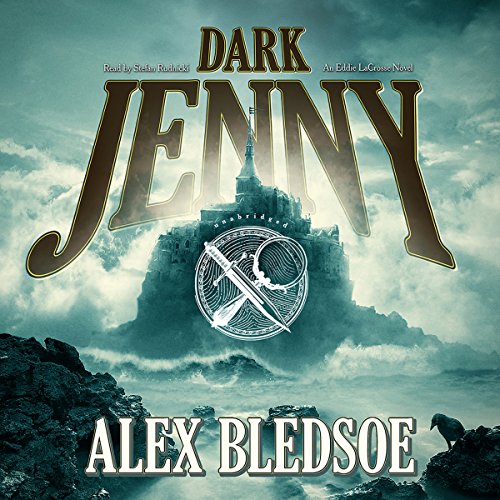 Alex Bledsoe’s fantasy novels have drawn rave reviews for their ingenious blend of classic fantasy and hard-boiled detective fiction. Now Bledsoe returns with an all-new tale of intrigue and murder.

Freelance sword jockey Eddie LaCrosse is in the wrong place at the wrong time while conducting an undercover investigation on the island kingdom of Grand Bruan. When a poisoned apple kills a member of the queen’s personal guard, Eddie becomes the prime suspect in the murder. He must do some fast talking to keep his head attached to his shoulders. While trying to clear his name and find the real killer, Eddie becomes embroiled in a nasty political scandal. Someone is trying to ruin Queen Jennifer and doesn’t care who is killed along the way.

The more Eddie digs, the more twisted the lies become, until Eddie finds himself caught between two opposing armies. The fate of the entire kingdom lies in his hands.

Murder, betrayal, and magic—just another day on the job for Eddie LaCrosse.

Very different from the first two in the series

Although Stefan Rudnicki did a wonderful job at narration, the story line was a bit different, taking place in Eddie LaCrosse's past. He is telling the story to his friends as they sit and drink to hear his tale. It goes from the (Bar room story, several times and then back to Eddie telling his tale) You will see a lot of parallels, between Eddies story and the story of "King Arthur". True evil and again those with weak stomach, may wish to pass on this. I hope that Alex Bledsoe continues with more Eddie LaCross in more Original tales. The first two books were wonderful and I recommend them highly. This book is a bit different and it can stand alone, where the first two can not. I was hoping for more about Eddie, but I do hope that Mr Bledsoe will hear the fans and poke some life into a new story for Eddie Et Al.

Another exceptional novel by Eric Bledsoe with excellent narration

This is modern-day-medieval period piece. What does that mean? The setting is medieval/fantasy, but Alex Bledsoe uses current modern vernacular in his dialogue, so the characters are more human, more relatable, to our modern minds. His characters are engaging, his protagonist sympathetic, and human as they struggle with their own failures and doubts.

The narration is excellent! I love this narrator so much, his timing, his deep voice that just drips with honey, but I’m going to try to find even more books narrated by him!

I accidentally started with this book, book 2 in the series, instead of the first book, and then went on to "Burn Me Deadly," not realizing this was part of a series. It didn't matter - Bledsoe's books each stand on their own, even in a series.

Bledsoe, in this entire series has a gift of story telling. Even though this series is in made up world, you don’t need to know much about it to understand the plots of any of the LeCross books and yet you don’t feel lacking or wondering at the end. He spins a mystery in a way that you will not understand until he tells it but you are so caught up in the adventure to notice it.

I am a huge fan of the series. I lovedddd book 1 &2. but this one was just....meh. not as original, some repetition from previous books.
I also didn't like that Eddie was telling a story the whole time. This means all character development & previous storyline basically was on hold. I found it annoying.
The performance was spot on, as always!
I will for sure be listening to #4 next.

As simple and short as the books seem, the series is very addictive. I think this is the best one yet!!

I always love Stephen Rudnickis narration in really any book he does he always puts in so much work this was no different and I think it made the story even better. because really this is just a different version of King Arthur's Tale But honestly the narrator and the writer both worked in tandem to really bring it to life in my opinion better than the actual Mythic tale

I've really been enjoying this series. He tells a good tale with a good ending.

a bit of a mystery story that kept you guessing till the end.
love the narrator, will definitely listen to more by him

To me it seemed a storyline variant from Camelot, with some definite twists and turns.

Very listenable and a unique idea. A medieval film noir. This gun for hire becomes this sword for hire. Very difficult plots and not predictable so far ( I’m up to book 4 now). Excellently read in a film noir narration style with believable characters. It passed the interest test as I carried the player from room to room rather than just leave it playing whilst I nipped to the kitchen etc.

once again the author delivered a satisfying story which was emotional and funny.
I look forward to the next book.