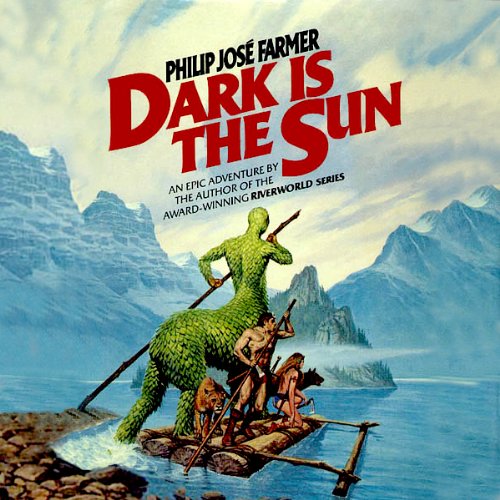 Dark Is the Sun

Fifteen billion years from now, Earth is a dying planet, its skies darkened by the ashes of burned-out galaxies, its molten core long cooled. The sunless planet is nearing the day of final gravitational collapse in the surrounding galaxy. Mutations and evolution have led to a great disparity of life-forms, while civilization has resorted to the primitive.

Young Deyv of the Turtle Tribe knew nothing of his world's history or its fate. He lived only to track down the wretched Yawtl who had stolen his precious Soul Egg. Joined by other victims of the same thief - the feisty Vana and the plant-man Sloosh - the group sets off across a nightmare landscape of monster-haunted jungle and wetland. Their search leads them ultimately to the jeweled wasteland of the Shemibob, an ageless being from another star who knows Earth's end is near and holds the only key to escape.

©1979 Philip José Farmer (P)2009 Blackstone Audio, Inc.
Fantascienza Fantasy
Mostra di più Mostra meno
An epic adventure by the author of the award-winning Riverworld series.
"Farmer is as inventive as ever, and it is a joy to sit down with a book which is this much fun....Highly recommended." ( Science Fiction Collector)
"The story proceeds briskly, with fresh inventions on every page, while the characters' original quest grows increasingly complex. The particularly exotic settings and earthlike flora and fauna lend an atmospheric touch." ( Fantasy and Science Fiction)

Quirky and Fun, But Forgettable.

Brief and to the point.

This is an UNUSUAL story, that if I discuss its contents and storyline in any way, I ruin the experience. This is because the story's one strong factor is that it is a quirky world, and a quirky story based on that world. It's made for the discovery.

So, brief and to the point. It's the small journey this audiobook takes you on, a voyage of discovery, that makes it fun.

So, if you want deep, stay away. If you like the roller coaster at the country fair, take a ride.

This is a great sci-fi fantasy piece by a guy who must have done a LOT of drugs... It seems to have worked for him though... This one specifically I first read in jr high, and recently hunted it down again to reread.

It is set in the FAR future, and is working under the prenise that the universe is collapsing back in on itself. Society on Earth is in one of the tribal cycles. A small group of adventurers, who hadnt intended to at first, set off on a quest to try and save humanity (and a few other species as well) from the impending doom of not only the entire planet, but the entire universe.

I may have had a soft spot for this title coming into it, but I think anyone who enjoys a good post apocolyptic romp would enjoy Dark is the Sun.

Had many twists throughout the book. Characters were well defined.

Would you be willing to try another book from Philip José Farmer? Why or why not?

Yes, A GREAT writer with attension tot he details and still easy to read/listen.

Would you be willing to try another one of Rebecca Rogers’s performances?

Only OK with Narration

This is a good PJF story, but the narration is monotonous. I had to register a bunch because the voice does not keep your attention. It drones on to such a degree that you stop paying attention.

I keep getting up to the point in this audiobook where a tree centaur spends multiple pages pontificating on biology, evolution and the creation of the universe and the text implies that he is communicating this through tootling on a whistle.

I have a high tolerance for goofiness but this somehow makes the above feel boring.

PJF is an amazing writer of science fiction. I have read most all of his many books and novellas. The reader did a great job. I listened to it during a 16 hour car ride and it kept me fully entertained throughout. They should have more free books by PJF at Audible.

Narrator is great but the story is BORING

I tried to be patient and listen to this dreck but even the narrator can’t overcome an endlessly boring story.

Loved this audiobook. The original story is imaginative and well written
Rebecca's Rodgers is a very talented narrator.

Dark is the Sun

Good adventure story full of imagination and wonder. A dying Earth, full of strange and yet familiar wonders. Where could we be in a
billion years? What will be there to great us at the end?

I truly enjoy this epic Phillip Jose Farmer journey. Rebecca Rogers gave a fine performance reading the book. If you have not experienced Mr. Farmer, this would be a good title to start with. I hope Audible will add PJF's The Stone God Awakens.