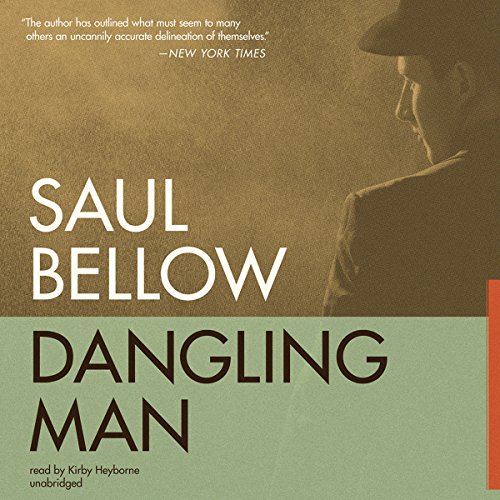 Expecting to be inducted into the army during World War II, Joseph has given up his job and carefully prepared for his departure to the battlefront. When a series of mix-ups delays his induction, he finds himself facing a year of idleness. Written in diary format, Bellow’s first novel documents Joseph’s psychological reaction to his inactivity while war rages around him and his uneasy insights into the nature of freedom and choice.

Saul Bellow (1915–2005), author of numerous novels, novellas, and stories, was the only novelist to receive three National Book Awards. He also received the Pulitzer Prize for Fiction, the Nobel Prize in Literature, and the National Book Foundation Medal for Distinguished Contribution to American Letters. During the 1967 Arab-Israeli conflict, he served as a war correspondent for Newsday. He taught at New York University, Princeton, and the University of Minnesota and served as chairman of the Committee on Social Thought at the University of Chicago.

©1944 1971 by Saul Bellow (P)2012 Blackstone Audio, Inc.
Psicologico Epistolare Narrativa letteraria Di guerra e militare
Mostra di più Mostra meno
“In this imaginative journal, set against fresh and vivid scenes in Chicago, the author has outlined what must seem to many others an uncannily accurate delineation of themselves.” ( New York Times)

Personal sentimental reflexive. Sad at times
Beautifully written visual. I recommend this book and this writer.

If this was a non-fiction book great but it’s not, how it was written in a diary format it made the book seems double long. If you don’t mind hearing a lot of “he said, I said, she said, well I said, so-so said” definitely it has its lows and highs

The story as in life creeps up on you to it’s disturbing conclusion... what is this existence and what is all of this discard we call life

An Interesting Take On Idleness

This is a bit of a slow burn, but the story itself is one worth reading. It gives you a glimspe of the possible negative repercussions of a sedentary, idleness brought about by a lack of employment or engagement. Recommend!

Bellow’s dour, plotless, derivative, misanthropic and above all boring first novel; of the 150+ novels I’ve listened to on Audible, this was the worst. There is none of the invention and playfulness of Bellow’s later novels here. Plus the book is narrated by some guy who sounds like Doogie Howser on Valium. Avoid!

The novella was Bellow's first and many of the themes he will develop more fully later are already adumbrated here.

What other book might you compare Dangling Man to and why?

An Unbearable Level of Self Pity

The title says it all, I understand the story is about idleness but really it goes deeper than that. This isn't about someone who is idle against their will this is about someone who is idle by choice. Its about someone so absorbed with their own self pitying world view that they are unbearable to the people around them. Its about someone who feels shame for both the abnormal and utterly normal elements of their situation despite the constant reassurances from their friends and family that they understand. Its about a grown man so filled with self pity that he gets into a fight with his 14 year old niece because he wants to keep playing the same song over and over again. At best it is mildly thoughtful and at worst it is unbearable to listen to this arrogant, selfish, and utterly unsympathetic main character make a fool of himself. Barely finished and would not read again.

This book was fantastic. I found the parallels between it and my life astonishing. I further found this book developmental and maturative for a young man coming of age like myself. I highly recommended it.

How this found me at the perfect time...

The caption on the image says it all.. Uncanny delineation of one's life in parallel. The degrees of separation between myself & my life and that of the author/character abound, yet the similarities do, too, in proportion. Compound that with the fact that my sister shared an intimate journal entry just 2 days ago and on that same day as I was looking for a new book, noticed this sitting in my library with a note that it is included in my membership until 3/18... I had no idea which referral moved me to add it to my library, but am glad it was there. Finished in 2 days and am blown away by the timing of my life's events compared to those of this book. Bravo.

A few gems buried in 6.5 hours of frustrated droll

The character writing this journal is so I’ll-tempered and frustrated that he makes himself seem simple at time. It was delightful to be surprised with the few rare moments of tantalizing philosophical wisdom. The remainder of the story however was far from engaging. I felt very much just along for the ride. I felt fairly satisfied with the conclusion though.

The intimacy and rage in Bellow's brilliant book is brought to life by Kirby Heyborne. I've listened to it a few times. so relevant to our world now.