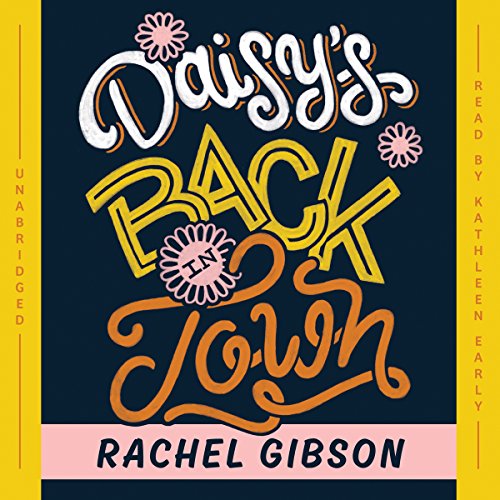 Daisy's Back in Town

Daisy Lee Monroe thought she'd brushed the dust of Lovett, Texas, off her high-heeled shoes years ago, but she's come back home only to find that little has changed. Her sister is still crazy, and her mom still has pink plastic flamingos in her front yard. And Jackson Lamott Parrish, the bad boy she'd left behind, is still so sexy it hurts. She'd like nothing better than to avoid this particular man, but she can't. Daisy has something to say to Jackson, and she's not going anywhere until he listens.

Jackson learned his lesson about Daisy the hard way, and now the only word he's interested in hearing from Daisy's red lips is good-bye. But she's popping up everywhere, and he doesn't believe in coincidence. It seems the only way to keep her quiet is with his mouth, but kissing Daisy had once been his downfall. Is he strong enough to resist her now? Strong enough to watch her walk out of his life again? Strong enough to make her stay?

I'm about three-quarters through this book and I have to say I am soooo over the angst. I love Rachel Gibson novels mostly because they are fun and sexy and have characters that are easy to like. But, this one has so far been a UBER let down. Even this far into the book, I cannot make myself like or root for the heroine. I think the secret she kept from Jack is unforgivable and I cannot see this working out. All of her excuses for why she kept her secret were lame, unfounded, and completely selfish. Not only did this lowdown woman keep a horrible secret from a man she claims to have "loved, " but she married his best friend to boot. WTF, Rach? I can't help assuming at this point that any HEA would be totally forced. I want my money back. This chick is not heroine material.

*The overall 3 stars is because I enjoy listening to Kathleen Early.

The heroine was a horrible human being that didn’t have any self discovery or growth. She was seriously garbage. It was free and I still want my money back.

I usually do not like stories where a woman leaves pregnant and don't tell the father until many years later. I have no sympathy and no tolerance for that in real life. And in fiction it turns me off. With that said the author did a good job in trying to with the plot she said out. the rest of the story line I enjoyed even though they all have something to do with the main plot which is Secrets From the Past. I would have a lot to say. I had already given up enough info for spoilers on this story. Give it a chance despite what I said.

This story was perfect. Perfect pacing and characters and depth. Loved every minute and didn't want it to end. Love how Jack learned to forgive.

This is one of my favorite Rachel Gibson books and was thrilled to see it was out on Audible now ! I loved listening to the story - it was good & entertaining. I recommend this to anyone who likes contemporary romance books. Great chemistry between the characters !

I really liked this story. The sweet friendship of the school children followed by betrayal and then the home coming worked very well.

The worst characters I have ever read/listened to. No depth. The guy was a jerk. The female was an idiot.

that lady is a horrible person to be honest. I really dislike her. t h

Started Okay then rushed to the end

Other reviews have said it. The reason for the conflict is very weak on the part of the h. The betrayal of the best friend and all he says in the letter is so messed up.

Bottom line the book needs to be about 40k to 60k words longer. The h was really small minded and was not begging for forgiveness but demanding it. No she needed to really suffer and learn that she was truly small minded and her and the guy she ran away with knowing what the knew where cruel at a level to be groveling and showing a turn around that was just not here.

If this was a book where the H did something that messed up (and there are many) the H would need to do a lot to earn back the h good graces. Not demand forgiveness but earn it by action and true contrition.

I liked this book but it was not a light hearted story as the book cover would suggest. I was amazed at the devastating deception of the heroine, Daisy, so much so that I had to listen to the whole story to find out how the author would rationalize and overcome this deception to the lead man, Jack. I have mixed feelings, as the other listeners did. It was a sweet ending about forgiveness but it was an unbelievably high expectation that Jack work through his feelings in a couple of days. Daisy had 15 years of knowing her secret and expected Jack to get over it and move on in a matter of hours. Daisy doesn't seem to understand how long it takes to work through the emotional turmoil that her deception creates. It wasn't fair to Jack and it made it difficult for me to empathize with Daisy.

probably the most emotional and complex of Rachel Gibsons stories I've read so far. was a bit slow to get started but made my heart ache for Jack. I didn't like the narrators voice for Jack but was tolerable

The heroine makes a terrible, immature decision at the age when people make terrible immature decisions. It makes no sense but I can live with it. But to double down on that decision for 15 years? To return to town to do what's right and then... just not bother, for 'reasons'? It's packaged as a romance but the romantic aspects grossed me out, in this context. Maybe the book improves in the second half. Maybe the author addresses the heroine's 'poor me' selfishness, but I couldn't go on. The hero deserved better.

MC is not likeable

Daisy was beyond selfish and did not redeem herself throughout. Barely an apology and expects everyone to 'understand' and 'forgive' straight away. Jack and Nathan were likable characters. She didn't do enough to apologise or understand Jack's POV. Spoiled pretty girl, used to having everyone give way to her.

Absolutely love Rachel Gibson’s writing and books. Great romance stories and always griping… honestly, I didn’t like this one as much. I agree with reviews that don’t like the “leading lady”, but my biggest pet peeve was the constant flash backs (but that’s a personal preference). I mostly disliked the way the Jack and Daisy interacted… with teenage level logic or none at all (to me). I’d recommend reading it yourself. Personal opinions are always biased.


As for the narrator: I’d read anything Kathleen Early read! Great narration as always!