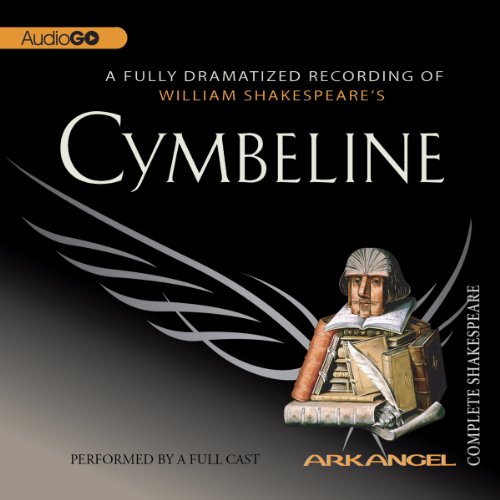 This strange, dark romance includes two songs composed by Shakespeare that are amongst the most beautiful in the English language.

Imogen, the daughter of King Cymbeline, is persecuted by her wicked stepmother, the Queen, and by Cloten, the Queen's doltish son. Disguised as a boy, she sets out to find her husband, the banished Posthumus. On her journey, she unwittingly meets her two brothers, stolen from the court as infants. Posthumus, meanwhile, has been convinced by the villainous Iachimo that Imogen is unchaste and agrees to a test of her faithfulness.

I cannot sing. I'll weep, and word it with thee,
For notes of sorrow out of tune are worse
Than priests and fanes that lie.
- William Shakespeare, Cymbeline

Not a great Shakespeare play. It has a few good lines and seems to follow the path cut by earlier jealousy plays like The Winter's Tale and Othello. I think, if grouped with these two, it is the runt of the jealous litter. My favorite quote about this play (or this point in Shakespeare's life) comes from Lytton Strachey, who said it is &quot;difficult to resist the conclusion that he [Shakespeare] was getting bored himself. Bored with people, bored with real life, bored with drama, bored, in fact, with everything except poetry and poetical dreams.&quot;. I tend to agree. This seems a bit dashed off. A bit loose and ended a bit too happy. While I don't need everyone to die, like in Hamlet, I prefer my Shakespeare endings to be complex, uneven, human. The deaths in this play still seemed to contain very little drama to them. And to be sure, the IDEA of the play was an interesting one. I think if Shakespeare had written this earlier in his life, or if he had more energy toward the end of his life, this might have been able to achieve something between Winter's Tale and Othello.

One note, I might have even given it only 2-stars, but Act IV, Scene 2 is amazing. Belarius has some great lines, and the funeral song is amazing (I'm normally not a fan of Shakespeare's songs, but this one was amazing).

- Fear no more the heat o' the sun,
Nor the furious winter's rages;
Thou thy worldly task hast done,
Home art gone, and ta'en thy wages:
Golden lads and girls all must,
As chimney-sweepers, come to dust. (Act 4, Scene 2)

- The ground that gave them first has them again,
Their pleasures here are past, so is the pain. (Act 4, Scene 2)

- Fortune brings in some boats that are not steered. (Act 4, Scene 3)

The performers were great. I just wish there was a little more narration. I don't mean adding anything to Shakespeare, but even having someone read who enters and exits the stage would help. When someone started talking in a new scene, it sometimes took several minutes to know who was on stage and who the players were. I also would have liked to hear "Act II, Scene III," (etc), but that wasn't a big deal.

Now that I've listened to it, I can listen to it again and again and it will be easier to follow each time. I just had to reference the text occasionally to get on track, which was difficult as I was listening to it in the car.

Well done. The parts were all well played and the words, as always, were pure heaven to hear.

I liked the music...

... throughout, especially the 20 minutes or so of it at the end. The volume was inconsistent at points, which is why I gave the production three stars. One of Shakespeare's weirder plays. Imogen is awfully forgiving considering Posthumus wanted her dead.

Strong of the lesser known plays of Shakespeare

I am on a quest to read/listen all of Shakespeare's plays. Cymbeline was next on my list, it amused me at just the right time. The drama and the writing are impeccable as always, the performance of the actors are superb, which is the rule of thumb for all ArkAngel Productions.

The actors did a great job, but the sound quality wasn't very good and was a struggle to hear in the car sometimes. Also, the reading of stage directions would have helped to set the scene a little better for listeners.

Excellent Performance with One Awful Flaw

This is a really good performance of a difficult and confusing play. Well done to all the actors. I would happily recommend it with one serious reservation; this production contains some of the worst music I have ever come across. At the beginning of each new scene you will be assaulted with lumbering recorders, seesawing violins, and flatulating horns playing utter nonsense on two bar loops. The musical settings of Shakespeare's songs are also horrible and actually make the text incomprehensible at one point. Beware - this music is so bad and there is so much of it that you may actually begin to feel fear towards the end of each scene, as I did, knowing that more of it is coming. How did this happen?