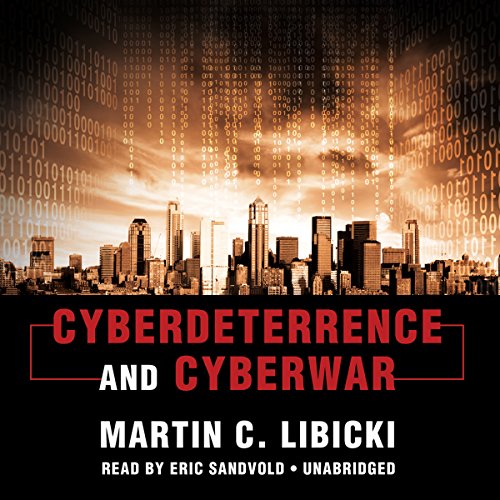 The protection of cyberspace, the information medium, has become a vital national interest because of its importance both to the economy and to military power. An attacker may tamper with networks to steal information for money or to disrupt operations. Future wars are likely to be carried out, in part or perhaps entirely, in cyberspace. It might therefore seem obvious that maneuvering in cyberspace is like maneuvering in other media, but nothing would be more misleading.

Cyberspace has its own laws. It is easy to hide identities and difficult to predict or even understand battle damage, and attacks deplete themselves quickly. Cyberwar is nothing so much as the manipulation of ambiguity.

Martin Libicki explores these topics in detail and uses the results to address such issues as the pros and cons of counterattack, the value of deterrence and vigilance, and other actions the United States and the U.S. Air Force can take to protect itself in the face of deliberate cyberattack.

This is a three-year old RAND study for the Air Force describing the threat picture as it was then preparatory to standing up the 8th AF (which didn't, ultimately; what we got instead was US Cyber Command and the individual service components).

There is nothing ground breaking here, and for the price vs content, I would not recommend buying it. Instead look to the RAND site for a free PDF copy of the report and spend an hour looking it over.

Had this been a government report sent to my office as a sitting President I would refuse it on the ground of needless elaboration & refused to pay for it with taxpayers dollars. If carefully filtered all this information could have neatly been streamlined into a Threat Reaction chart outlining potential threats & threat reactions to combat threats. Number of pages doesn't improve the defense of our country; well thought, well filtered, then well presented information to act on does. I highly recommend this book be rethought & rewritten to be presented in a manner to respect the reader's time & be more useful to our national defense. Needless elaboration to fill pages doesn't fool me as research.

I was so disappointed! This book promised to be a fascinating examination of the new theatre of war: Cyberspace. I imagined scenarios depicting the consequences of hacker attacks on crucial targets such as banks, stock markets, military computers, air traffic control etc. and possible countermeasures we could defend ourselves with.

Sadly, for much of the book it is an exhaustive examination of when and if we would use deterrence. There are some interesting snippets, such as diplomatic representations concerning possible 'trojan horse' components made in China, present in almost every computer. Also the three levels of cyberspace (physical, syntactic, semantic), and where attacks would take place. However, these were island of interest in an ocean of dull dull dull debate... Sent me to sleep every time...

The word 'may' is used approximately in every second sentence of this small book that grabbles with the challenges of cyberwarfare (including defining it). Basically the conclusion is that a robust defense of your digital infrastructure and systems seems the wisest course of action, while cyber attack and associated attempts to both deter and retaliate in the traditional paradigms of both conventional and nuclear warfare seems to elusive in terms of predictable and sustainable capabilities and effects. The sophistry of the arguments leave the reader more confused than enlightened, but that MAY be the exact intention.

How this specialist subject is beyond me. I thought there would be some snippet of useful info there. I was wrong