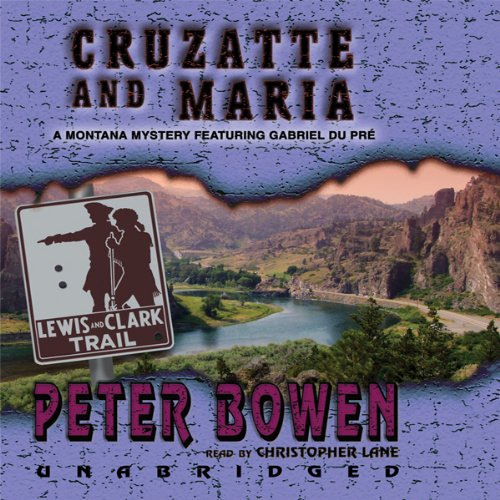 Montana native Gabriel Du Pre has been hired as a consultant by a group of filmmakers shooting a documentary on the Lewis and Clark expedition. Du Pre is a descendent of a Metis fiddler and voyageur named Cruzatte who accompanied Lewis and Clark on their journey. And Du Pre's daughter, Maria, has been cast in the role of Sacajawea.

But trouble is afoot. First a fire damages the film props, and then two bodies are fished out of the river. Someone doesn't want them there. Suddenly the site is swarmed with television crews and FBI agents trying to work the mystery. As word gets out and filmmakers, environmentalists, and others threaten to flock to Montana to exploit its resources, tensions rise to the boiling point.

©2001 Peter Bowen (P)2004 Blackstone Audio, Inc.
"Bowen's exuberant storytelling mines the rich cultural history of the West." (Publishers Weekly)
"The Du Pre mysteries are never as focused on dead bodies as they are on the clash of cultures....A solid entry in a great series." (Booklist)

Back in good form

I seem to recall that Bowen had a little trouble getting a very wealthy man integrated into the stories. This time it it pretty well works.

Not sure as well what the Metis accent really sounds like--the narrator's voice and the one I had in my head when reading the first couple of books are different. But I've no idea which--if either--of us is correct.

But the book is fun--Dupree gets involved with a movie company--at least partly because there was a Metis fiddler on the Lewis and Clark expedition--the Cruzatte in the title. Maria is one of Dupree's daughters--and the one who both drags Dupree into the situation and then becomes much more involved herself.

After a previous movie company, to put it politely, put everyone in the county's back up, after most of the land on the river is sold to outsiders,after some rabid environmentalists LOUDLY voice their opinion that all white humans, even those whose family has been there for well over a century, be evicted so that buffalo can be reintroduced in something like their previous numbers--people start being killed on the river. A couple of FBI agents say that since Maria is already at the film location, Dupree can easily fit in without arousing the killers.

There are a bear and a dog who manage to steal scenes, and one of Dupree's granddaughters, a truly precocious 7-year old, who has an encounter with one of the FBI agents so funny that I had to pull my car over to the side of the road and not crash for laughing so hard.

I'm working my way through the series, and this one is the best one so far. The story lines are good. I want to check to see if these are based on any kind of facts or legends. The characters have almost come to life in my imagination, but most of all, the way the characters interact with each other and banter back and forth makes it so real. I will definitely read these again .

a story about a conflict in values

Another good story that's about contemporary times let's speaks to the old West and the fact it basically people are good and just trying to take care of their families and their way of life can you have new people coming in who don't understand that basic fact and want to implement their values and their way of life without a lot of understanding. I really never met a rancher or a farmer who don't care about their land and try to take care of it. most of them are what I would call conservationists using the land to revive a livelihood for their family.. but keeping it in pretty good state so can provide a livelihood for future generations. the story addresses all these issues from the perspective of the people that live there.. once again I would say that reading or listening to the stories from the beginning of the series is a good idea you miss a lot if you don't because of all the past references. it's really like an epic novel of a family the Dupree family and friends and other connections that ate with it covering years of the family daily life.

Funny, weird twists, and much enjoyment! more books with Christopher Lane narration if you please.

I love these books, and am sorry that this is the last one in audio format. Mr. Lane does a great job reading this Gabriel Du Pre mystery. Alas, there is a sequel to Cruzatte and Maria
But it hasn't been recorded, (is anyone listening, (no pun intended)). I expect I'll to read it.