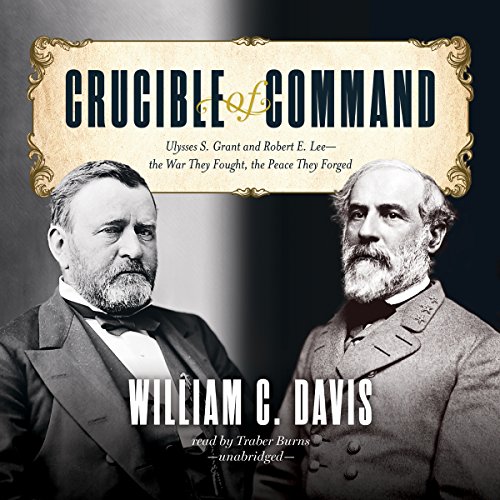 A dual biography of two iconic leaders: how they fought a bloody, brutal war then forged a lasting peace that fundamentally changed our nation.

They met in person only four times, yet these two men determined the outcome of the Civil War and cast competing styles for the reunited nation. Each the subject of innumerable biographies, Generals Ulysses S. Grant and Robert E. Lee have never before been paired as they are here.

Exploring their personalities, their character, and their ethical, moral, political, and military worlds, William C. Davis finds surprising similarities between the two men as well as new perspectives on how their lives prepared them for the war they fought and influenced how they fought it. Davis reveals Lee's sense of failure before the war, Grant's optimism during disaster, and the sophisticated social and political instincts that each had when waging a war between democracies.

Plutarch looks at Grant and Lee ...

If you could sum up Crucible of Command in three words, what would they be?

What other book might you compare Crucible of Command to and why?

Davis follows the approach of Plutarch's classic "Lives". While he skips a vast amount of biographical material, he does show important similarities and differences in the upbringing, training, early military experience, and eventual command styles and grasp of strategy and tactics of the two great Civil War commanders.

Burns's reading was expressive, moved along at a good clip, and was always clear. History should always be read like this.

When you write about figures as prominent and often-written-about as Lee and Grant, you have to bring something new to the discussion, and Davis does exactly that. Of course, some will be outraged that Davis is not worshipful to Lee (the normal treatment) but instead measures his mistakes against Grant's, and shows ways in which Grant's command style was more effective than Lee's. Davis admires what is admirable about both men, and deals candidly with their flaws. An excellent addition to military history and to Civil War evaluation.

Read many books on Lee

This reading was extremely detailed and provided a much more inside view of the men than i have read before. Most of it based on the men's writings.... It gave no preference to either man's character or accomplishments.... The author expressed his opinion at times but it was always back with facts.... Good book if you are into this war....

Very interesting study in the dichotomy of the Civil War's two most famous generals. Focuses less on the battles and tactics than on the respective personalities.

Which character – as performed by Traber Burns – was your favorite?

Lee, I feel he did well changing his accent

The death of Lee

Unbiased writing about the two which is hard to find in Civil War studies.

Where does Crucible of Command rank among all the audiobooks you’ve listened to so far?

Ranks at the top.

This story follows the history of the period very well and gives an intèresting personal insight into both men's personality.

What does Traber Burns bring to the story that you wouldn’t experience if you just read the book?

Author fails to peel back the layers.

I purchased this book because I’ve studied the southern generals of the Civil War and I thought this would be a good bridge into the northern subject matter. I have read a few books and listened to three biographies in which General Lee was a pivotal character. Based on the author's portrayal of Lee I am confident Grant's story leaves much to be desired. Your time would be much better spent studying one man at a time.

My next book will be about General Grant.

Which character – as performed by Traber Burns – was your favorite?

Traber Burns gives a subtle performance and I would not shy away from listening to one of his other narrations.

Clouds of Glory by Michael Korda is a great listen.

I look at these two historic figures in a much different light after listening to this book. The only negative from the audio version is the lack of maps to help understand the logistics b of the battles.

I enjoyed the retelling of the stories of Grant and Lee and their leadership during the Civil War. I particularly enjoyed Davis' focus on how they stragetized their campaigns and how they handled their staffs. Davis' use of their correspondence gave us an intimate look at their personal struggles. A familiar story well told.

A very long book, with more battle details than most readers will want, but worth working your way through to the insights on what made each successful. Both were, of course, outstanding leaders, able to inspire their armies and their countries. But Grant was the better manager, and the distinction was important to the results of the war.

Exceptional. This is truly an insightful study .

Exceptional. This is a truly insightful study of both Generals Grant and Lee. So many knew of it's inevitably and yet, proceeded.