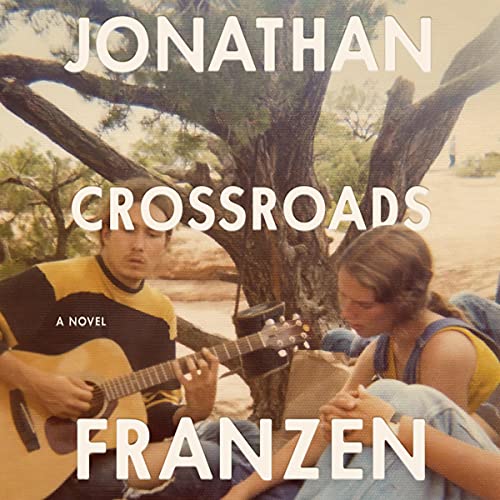 Jonathan Franzen’s gift for wedding depth and vividness of character with breadth of social vision has never been more dazzlingly evident than in Crossroads.

It’s December 23, 1971, and heavy weather is forecast for Chicago. Russ Hildebrandt, the associate pastor of a liberal suburban church, is on the brink of breaking free of a marriage he finds joyless - unless his wife, Marion, who has her own secret life, beats him to it. Their eldest child, Clem, is coming home from college on fire with moral absolutism, having taken an action that will shatter his father. Clem’s sister, Becky, long the social queen of her high school class, has sharply veered into the counterculture, while their brilliant younger brother Perry, who’s been selling drugs to seventh graders, has resolved to be a better person. Each of the Hildebrandts seeks a freedom that each of the others threatens to complicate.

Jonathan Franzen’s novels are celebrated for their unforgettably vivid characters and for their keen-eyed take on contemporary America. Now, in Crossroads, Franzen ventures back into the past and explores the history of two generations. With characteristic humor and complexity, and with even greater warmth, he conjures a world that resonates powerfully with our own.

A tour de force of interwoven perspectives and sustained suspense, its action largely unfolding on a single winter day, Crossroads is the story of a Midwestern family at a pivotal moment of moral crisis. Jonathan Franzen’s gift for melding the small picture and the big picture has never been more dazzlingly evident.

David Pittu is a two-time Tony Award nominee, as well as the award-winning narrator of countless audiobooks, ranging in genre from young adult (Scholastic’s 39 Clues series) to spy fiction (Olen Steinhauer’s The Last Tourist and Milo Weaver series) to the contemporary fiction of authors such as Jeffrey Eugenides (The Marriage Plot), Donna Tartt (The Goldfinch), and many more.

Not only a veteran theater actor, he works regularly in film and television. He lives in New York City.

How do narrators still do clownish stuff like this in 2021?

The book is better than previous Franzen. He’s just doing “The Ice Storm” but fine! This is a review of the audiobook.

The narrator is hilariously bad. Any female character is read with an affected, simpering “effeminate” voice like something out of a Mad TV skit - it actually reminds me of when Andrew Dice Clay used to do that super misogynistic “woman” voice. Why on earth do VO people still do stuff like this? Just read it straight in a neutral voice. Embarrassing!

His Perry voice is really creepy and atrocious too. The character is meant to be pompous but this performance, all deadpan vocal fry, is half school shooter, half pedo.

Let’s not even talk about how he does the black characters - though that is regrettably endemic to the entire industry.

A message to all VO people - for the love of god, just read this stuff in a neutral speaking voice.

Listened to 10 hours and finally gave up. So depressing- I didn’t like any of the characters - I felt like I was in the middle of junior high angst. Had to quit which I rarely do!

Been waiting on this for awhile, I've only just started it and love it. Exactly what Jonathan Franzen is good at,thank you. I'm so glad to see it's twenty four hours to listen to.

This book was a disappointment for me, I kept listening for something positive to happen , but it just went on . I can’t recommend it. A load of selfish people ,the whole family. Don’t waist your credit

One of Franzen's very best.

This was my favorite of his since The Corrections. May be an even better book.

Crossroads features deep character studies of what at first seem like an ordinary, upstanding family. These characters' depths and back stories are revealed slowly and expertly. I thought the empathy shown to the mentally ill, the addicted, the judgemental, the weak, the self-adoring, and the self-despising was remarkable. This author is very good at finding the humanity in his characters, even the less likable ones. I especially enjoyed the chapters taking place in the Navajo Nation.

Narration and production were superb. While this is the start of a trilogy (the plan is to cover a 50 year timespan) Crossroads stands on its own nicely.

I’d never read a novel by Jonathan Franzen until Crossroads and I was blown away by his skill. Among novelists his talent is superior, the dexterity of his dialogue, stunning. The narrator, David Pittu, should win an award for his performance. This is not an easy book to narrate and he did it to perfection. Highly recommended.

I gobbled this up as greedily as if someone had placed in front of me a resplendent chocolate cake. If I could give the narrator 10 stars, I would. This book was so important for me...the deconstruction of each member of the Hildebrandt family was done so masterfully, I rode along each word and each sentence with delight and admiration and often a sense of familiarity, even though I didn't grow up in a religious family. I can't wait for the next installment of the trilogy. I was very sad when the book ended. A great listen.

It's all about Franzen and how much he knows. Characters unlikeable -- no growth, Awful ending.

Which Way to Go

Within the last days of the Viet Nam war this is a story of members of a family whose father is a minister. The author capably relates the feelings of the country during this regretful time and how it impacts this family. This novel is first in a series of three.; the story will continue after the last page. The story is successful because any one of any age will be able to relate to one pf the central characters. "Crossroads" has multiple meanings: one is the name of an organization of youth within the church headed by the father noted above. Each reader will add a unique understanding of the term.

having an author and reader interview after the book is brilliant! thank you. hearing others about the book when i’ve just finished it is always what i want most.