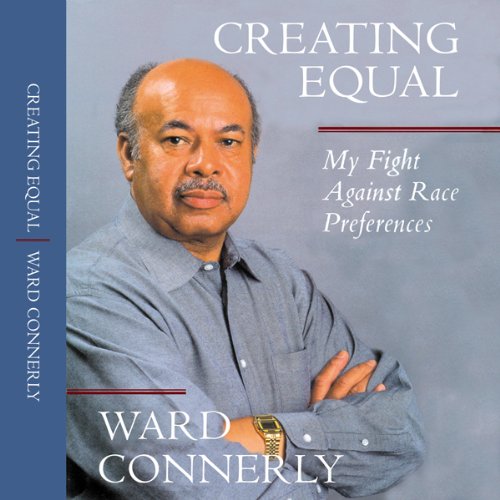 This is the story of a man who searched his conscience, decided that the American Dream should be colorblind, and then set out to change the rules. Part memoir, part history lesson, and part road map, Creating Equal tells how a Black man fought against affirmative action in California and Washington, D.C.

It begins in segregated Louisiana with a hard-working, resilient family that refused to be destroyed by personal tragedy or to be defined by race. This is where Ward Connerly grew up. In 1993, he would be called to make the most difficult decision of his life: to convince the regents of the University of California to end affirmative action. Two years later, he did the same thing for Washington, D.C.

Creating Equal - Thanks Ward - I needed this!

This is an excellent book. As mentioned in the summary, part autobiography, part history, and part road map. A must read if you want to truly understand the enter-workings of politics that is behind the Affirmative Action Programs. Even though the author feels he has to summarize his background, his comments and rational for opposing Affirmative Action Programs that include, racial preferences, and quotas is very well thought out and, in my opinion, right on . Reverse Discrimination and the continued emphasis, by the various 'so called" diversity organizations are, in my opinion, contributing to keeping negative race relation tension high in communities across the country. It is my belief that when given the right learning environment and opportunity, we Blacks are as competitive as any race. I came from a very poor family, and it has always bothered me that others in every company I have every work for, except the military, has a suspicion that I got my positions because of affirmative action quotas. They had no clue as to my education and work experience and my past accomplishments. Some people inquired about my pedigree indirectly and some were direct. But, be that as it may, while I was working in the corporate world, I always had that uneasy feeling that I needed to summarize my work history to various people I work with. I believe that the Affirmative Programs have contributed to this negative aspect of my work life. If I played a sport or music there would be no such questioning, of this I am certain. Read the book, it is very enlightening for everyone. I vote as a Democrat but I am issue oriented. However, I do not believe Affirmative Action is a political party issue. It is an American issue. God Bless Mr. Connerly for standing up and being man about his side of this devisive issue. The book was truly educational for me.