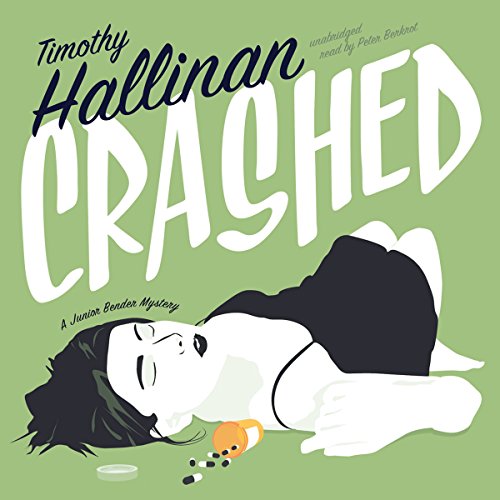 Junior Bender is a Los Angeles burglar with a magic touch. Since he first started breaking into houses at age fourteen, he's never once been caught. But now, after twenty-two years building an exemplary career, Junior has been blackmailed by Trey Annunziato, one of the most powerful crime bosses in LA, into acting as a private investigator on the set of Trey's porn venture, which someone keeps sabotaging. The star Trey has lined up to do all that's unwholesome on camera is Thistle Downing, America's beloved child star, who now lives alone in a drug-induced stupor, destitute and uninsurable. Her starring role will be the scandalous fall-from-grace gossip of rubberneckers across the country. No wonder Trey needs help keeping the production on track.

Junior knows what he should do - but doing the right thing will land him on the wrong side of LA's scariest mob boss. With the help of his precocious twelve-year-old daughter, Rina, and his criminal sidekick, ex-getaway driver Louie the Lost, Junior will have to pull off a miracle to get out of this mess.

Timothy Hallinan is the Edgar - and Macavity Award - nominated author of over a dozen widely praised books, including the Poke Rafferty Bangkok thrillers and the Junior Bender series. In 2010 he conceived and edited an e-book of original short stories by twenty mystery writers, Shaken: Stories for Japan, with 100 percent of the proceeds going to Japanese disaster relief.

"Tim Hallinan has done it again. He's created a must-read series that you will find hard to put down! Junior Bender is all you could ever want in a hero-thief: smart and funny, with a penchant for finding himself in situations he'd much rather avoid. Do not miss any of these books. A must-read in my house." (Brett Battles, author of the award-winning Jonathan Quinn series)
" Crashed is funny, thrilling, and even sad - a great beginning for a great new series. Timothy Hallinan is one of my favorite writers, and this is Hallinan at the top of his game. It's laugh-out-loud funny without ever losing any of its mystery. It's a whole new style and I love it. Junior Bender - a crook with a heart of gold - is one of Hallinan's most appealing heroes, rich with invention and brimming with classic wit. I can't recommend it highly enough." (Shadoe Stevens, Late Late Show with Craig Ferguson)
"Hallinan is one of the master storytellers of our generation. Crashed is pure rapture." (CJ West, author of The End of Marking Time)

I enjoyed this light read because of its humor and its convoluted plot. Yes, it strains credibility, but this is not great literature, just recreational reading that is much enhanced by the quality of the narration. I enjoy mysteries in which the hero is himself a criminal. This reminded me of the classic series by Richard Stark featuring Parker, although Junior is not nearly so ruthless. After all, he has a daughter he loves and and an ex-wife he hopes to win back. He's a little bit disarming in his forthrightness. I can imagine his going to a parent-teacher conference and, responding to his daughter's query about what he does for a living, that he is a professional thief. I look forward to the next in the series.

I love this book

The writing has extremely interesting with very creative banter that makes listening even more enjoyable. Great characters and great interaction. It's a serious story with a good bit of situational humor. A smart crook with a conscience has to be funny sometimes but the other characters are equally as interesting. The narration sounded a little annoying at first, not your normal voice, but easy to get used to, quickly, and then you find out he is actually quite good. Excellent story and he makes the implausible plausible.

Yes, because you are never quite sure who is on what side or where this is going.

Which character – as performed by Peter Berkrot – was your favorite?

Tough choice but Junior or Thistle. Both are smart, tough and in your face, take no prisoners kind of people. Total honesty with complete disregard for the consequences. Easy to admire and helps make the story interesting.

Bought this on a chance without knowing author or narrator. One of my better guesses. Read reviews of other Junior Bender mysteries and apparently you want to chose carefully, can't hit a home run every time I guess, but both my wife and I thoroughly enjoyed our trip more thanks to this book.

Heard a book review of Crashed by Nancy Pearl from the Seattle Public Library (check out her website) She really loved this book, so I checked it out and I'm so glad I did. Junior Bender's is my burglar hero! The other characters are well written as well and the story is fantastic. Peter Berkrot did a great job bringing Hallinan story to life. I can't wait for the next book in the series

I like the characters, but the story is a bit predictable. It also lacks in the area of believability, there are things that just don't make sense, in a "huh" kind of way. As the story comes to an end it loses the excitement, the sense of new. You might enjoy it but you'll want to get to the end, not because it is exciting but because your over the story

hallianan can certainly build up some comedy and a character or two, great listen this one, i'll be checking out the next "junior" adventure.

berkrot nailed the performance i would have given this an extra star for the story, however i found particular plot movements predictable (from me that's saying something) and the moralising was laid on a just a little thick for my liking. probably unfair criticism but there you go.

Entertaining and fast paced story telling read with tons of enthusiasm and energy. Author has a true talent with words. Loved!👍

Give Me a Break

36 year old burglar is fascinated by a beautiful but debased 20 year old actress with serious mental health and addiction problems. Creepy and icky.

CRASHED is a kind of an Elmore Leonard genre novel.
The similarity between Jack Foley[Bank robber] in OUT OF SIGHT [by Elmore Leonard] and Junior Bender[burglar in CRASHED] is that both are good hearted but Jack
Foley [played by George Clooney in the movie version]seems more believable as a successful criminal.......... as do the bunch of flawed people he is surrounded with.
Still,while CRASH is not as raucous and funny as a good Leonard novel,,,,,,,,,,,
If you are in the mood for some light summer fare it is an enjoyable listen.
The plot and characters are well crafted,the narrator does a good job.
I MIGHT listen to more Hallinan depending on what I'm in the mood for.
This is a "Feel Good" novel.Everybody feels good at the end.
The good are treated good .The bad are punished.
Somehow I had this feeling throughout the listen.

I really enjoyed the storyline, narration, clever dialog BUT! BUT! BUT! Hallian and his editor has done the unforgivable writing sin of using SAID instead of 100 OTHER words available in the English language. I hate this, detest it. To me it completely RUINS even a good book. There’s nothing more damn irritating than listening,to a dialog where every 3rd word is “said”. At least when reading you can skip over this crap. Seriously wth is WRONG with authors, they are WORDSMITHS use them! The worst is when a question is ASKED, yet author uses “said”. They HAVE to read reviews,be aware of this complaint. I also put huge blame on editors that let it go. So despite enjoying this book, I won’t be listening past #2 book if it continues. When your job is literally working with stringing words together, use the correct ones!