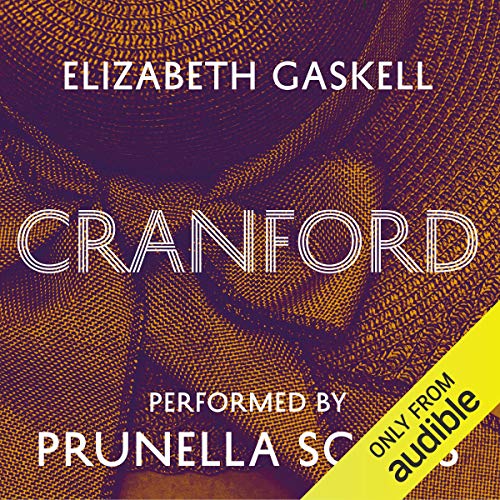 A vivid and affectionate portrait of the residents of an English country town in the mid-19th century, Cranford describes a community dominated by its independent and refined women, relating the adventures of Miss Matty and Miss Deborah, two middle-aged spinster sisters striving to live with dignity in reduced circumstances.

Through a series of satirical vignettes, Gaskell sympathetically portrays changing small town customs and values in mid-Victorian England, in a community governed by old-fashioned habits and dominated by friendships between women. Her wry account of rural life is undercut, however, by tragedy: with such troubling events as Matty's bankruptcy, the death of Captain Brown and the unwitting cruelty of Peter Jenkyns.

Gaskell was an accomplished writer who had many of her stories published in Charles Dickens's magazine Household Words. She was also friends with Charlotte Brontë and after her death, her father, Patrick Brontë, chose Gaskell to write The Life of Charlotte Brontë.

If you don't listen closely, you may miss the subtle sweetness of this heartwarming tale. There were times, mostly in the beginning, when my mind wandered and I became impatient with the seemingly trivial accounts of this Cranford lady or that. But I'm SO glad I kept listening, and had the opportunity to get to know and love Miss Mattie! What an example of the embodiment humility, kindness, and justice she is! The only other Elizabeth Gaskell novel I've read is "North and South." I loved it, and was expecting something similar from "Cranford." The novels couldn't be more dissimilar when it comes to plot and pace, but when it comes to highlighting the beauty of human decency, both do an excellent job.

A lovely, gentle satire of the Ladies of Cranford. Written with affection and respect and an incredible eye to detail (which I enjoyed) and exceptionally well read by my favorate narrator.

After having seen Cranford and Return to Cranford on PBS, my daughters and I were interested in hearing the original story. We were delighted! What a wonderful book to listen to by the fireside as we did this winter. We're great fans of Elizabeth Gaskell now.

One of my go-to listens!

I love this book! Its a series of vignettes of the lives of women in Cranford. I first decided to listen to this when they announced that it was coming to masterpiece classic, and while i thoroughly enjoyed the show, the book is so much better. Even after so many listens, I still crack up at the antics of some of the characters. Prunella Scales does a wonderful narration and Mrs Gaskell does a great job making the everyday lives of Victiorian women entertaining. I would recommend this to those who enjoy the novels of Georgette Heyer and are looking for something similar yet different.

4 stars for narrator; 3 for novel

The is <i>very</i> gentle social satire, and a poor cousin to most of Austen's, but I liked the book very much under the circumstances in which I listened - Lying sick in bed for a couple of days, I enjoyed the novel in just two sessions. However, if you're looking for something to inspire your morning work out, this wouldn't be it!

I listened, unaware of this book’s odd pedigree: a village character sketch that somehow grew into a sort-of novel. Finding it a tad disjointed at the start, as things proceeded, I feared I was the disjointed one. But no, preoccupied with another three-volume project, it’s generally admitted now that Mrs. Gaskell let this one get away from her.

Still, there’s much here to enjoy. The parallels to Austen go beyond mere setting and cast. Gaskell plays an Austenian trick—bringing us to the point of disliking a character thoroughly, then shaming us by showing how we’ve misjudged them—several times. This lets her (and us) simultaneously laugh at and empathize with the Cranford ladies as they struggle to maintain social standards in the face of railroads and other social upheavals (like marriage).

I’ve always enjoyed Prunella Scales, but I fear I was distracted from her fine reading by that same disjointed feeling (she seems to be getting it…why can’t I?). Still, she does a fine job here, and never more so than with the slyly funny Austenian lines.

Such a wonderful little story ! It might be said that nothing much happens, and if you are looking for plot-driven entertainments, you won't find it here. This is a story about the ladies ( and a few men ) of Cranford, in a time and society that are in the past. This lovely story celebrates the kindness and goodness of people, even as it also sees the humor in the eccentricities of its characters. If you enjoy the world of Jane Austen, this comes very close. And, perfect narration !

This is a slow moving novel that beautifully portrays life in a Victorian small town, where delicacy is the order of the day despite poverty. It isn't tragic, but there is a sense of gentle sadness about the stifled lives of the ladies of Cranford and their lost chances.

I was so glad I picked this narrator. Scales has a very pleasant voice and never distracted from the narrative. She has a great ability to bring out the emotions in a story without being overt or obnoxious about it.

I was surprised at how much I loved the audible version of this book, which I had read before. Prunella Scale's performance is truly outstanding and adds immensely to the enjoyment of the book.

Prunella Scales is an excellent intrepreter of Mrs Gaskell, I loved her characterization and reading of 'Wives and Daughters', and this first and lighter work by EG is just as fabulous.

This actress shows respect for the book, the emotions of the plot are accurately voiced and I really have her work as one of the reasons I love audio books. Forget the dreadful abridged or US readings, (sorry, I'd say the same if an English reader was doing an American work) and listen to this one, the only and best in my opinion.

Prunella Scales is a wonderful reader, sensitive to the nuances of Gaskell's writing and able to bring out all the comedy and pathos of this underrated book. Delightful!

This is beautifully read by Prunella Scales.

You don't get much definition of voice between different characters, but it could be said that the same is true of the original book, as one person relays everything that happens to the reader. You're drawn into the lives and gossip of the women of Cranford, giving a social history of the time, but in a very minute way.

A real delight and completely unexpected. Although I knew the story from the television adaptation I was quite unprepared for the wit and humanity of the writing. It made me laugh and cry and who better to read it to you than Prunella Scales.

Absolutely loved it. The story is so uplifting and Prunella Scales is a perfect narrator.

Great narration of a classic

This was a good production of a book I struggled with as a teenager many years ago. Prunella Scales is the perfect narrator, and brings the little vllage with all of its eccentricities to life vividly. I enjoyed it very much!

A much loved nineteenth century classic in which not very much happens yet there is so much to hear about - much like real life. Prunella Scales reading is full of affection, with some good northern accents. She makes it easy to understand this delightful period piece. Will listen again for the pure pleasure.

The descriptions of small town life in the 19th century are beautifully done. There is not much story as such and in this way it differs from the other books of Mrs Gaskell.

I was supposed to read Cranford in English Literature at school but refused to read any book I was told to! So I’ve returned to it 50+ years later, having recently devoured both North and South and Wives and Daughters with much appreciation. What a treat I’d missed - but I doubt I would have enjoyed Elizabeth Gaskell’s gloriously genteel ladies in my teens nearly as much as I do now with a bit of life experience to pad out their characters. A gentle delight from start to finish, it never palls, and enthrals the listener with its portrait of a lost way of life, and the vicissitudes of the kindly Miss Mattie told by her young friend Mary. Prunella Scales’ skilful narration is pitch perfect, of course, and doesn’t miss a beat.