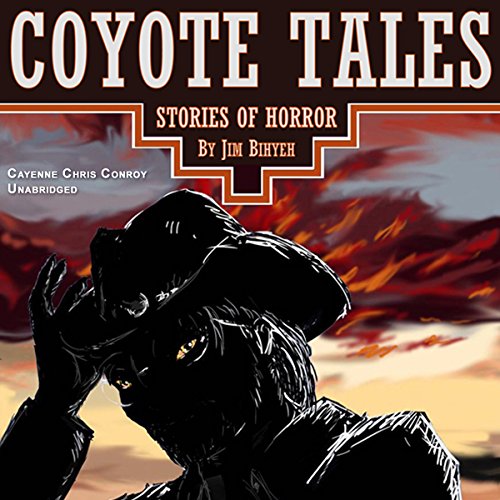 Coyote - the trickster, thief, warrior, wizard, coward, clown, and savior - has come to call in these 10 stories set in the modern Navajo Nation.

"Reservation Monsters": Coyote teaches a young boy with a monster under his bed that most monsters are far worse than the ones that go bump in the night.

"The Dreaming Way": After Coyote reveals her hidden powers, a teenager must decide whether she will use them for good or evil.

"Love Like Thunder": After a school shooting, a strange creature sets up camp by the local cemetery, where he visits the dead so that he may live a few days longer.

"The Speed of Lightning": Shaun Sallabye, a famous high school runner, gets a talent boost from Coyote that will push him to his limits - if it doesn’t break him first.

"The Shooting Way": Jesse Benally doesn’t believe in witchcraft. When his aunt contracts a strange sickness, he meets with a medicine man who teaches him that native witches don’t care what he believes.

"Black Body": Fernando Gishi waits for his father to get out of prison, but when he finds the body of a dead girl in the desert, he must rely on his friends as a dark force reaches out to make a deal he can’t refuse.

"Changing Woman": Nellie Begay, a former combat nurse, is missing her daughter. When a supernatural force might know where she is, Nellie must find the strength to heal herself and talk to Changing Woman.

"The Darkest Roots Run Deep": Ronnie Long, a struggling maintenance worker, must look to his girlfriend and their unborn child in order to forgive the biggest mistake of his life - before it kills him.

"Remember by Your Scars": Jane Lewis is a white nurse who fled the East coast and abusive relationships. When her latest ends, a new man walks into her life and reopens all the scars she’s tried to hide.

"The Bathroom People": LeCaine Keeyahani hates working fast food but he hates the idea of leaving the Reservation even more. When his dying grandfather asks for help ending his life with dignity, only the Bathroom People hold the answer to LeCaine’s future.

Like another reviewer here, I first heard a few of Jim Bihyeh's tales on a podcast. Out of the hundreds of tales of I have heard on that particular program, I must say Bihyeh's were among the few that stood out to me over the others. They are well written, well performed by Conroy and most importantly, unique.

The stories are saturated in Navajo folklore, and to me, that is something I have seldom (if ever) have come across outside of an actual book written about a particular culture's folklore. Not only are you listening to captivating stories, but you feel as if you're learning a little something about the Navajo culture throughout the collection's entirety, which is definitely a plus for me or any avid reader for that matter.

These stories reminded me of reading legends and mythology when I was a child. Full of mysticism, magic, superstition.... but here these things seem almost believable. The look into the lives of the characters of each story paints an all too realistic world while there are dark forces at work all around them. When Coyote crosses your path, he can give hope, he can break you, he does as he pleases. Sometimes you aren't sure whether he's the bad guy or the good guy.

Conroy gives an almost perfect voice to these stories. His interpretation of Bihyeh's writing is impeccable. I am surprised to see that there are only 9 reviews of this collection so far. Any horror or fantasy enthusiast would enjoy these. Heck, I believe anyone would!

Enjoyed the book, great stories with a Dine' twist. The reader does very well, very animated.

Where does Coyote Tales rank among all the audiobooks you’ve listened to so far?

one of the best audiobooks i've got. Have listened multiple times, always enjoyed.

Perfect pairing of author and narrator.

Like many others I began listening to Jim Bihyeh and the excellent readings that Cayenne Chris Conroy gives of Bihyeh's work. The stories feel very grounded and the characters believable even though awesome and massive events are unfolding around them. The lives of the characters feel, sound, and smell real although they are constantly being invaded by forces that they can barely comprehend, let alone have any effect on.

The natural sounding dialogue is to me one of the single strongest parts of this collection and it is truly brought to life by Conroy's excellent acting. He reads each character with a distinctive and immediately recognizable tone that makes the characters seem so much like real people that I found myself forgetting that they were all coming from one person.

There is a sense with Bihyeh's writing that he is not a mere tourist who did some research for his book, visited the rez for a couple of weeks, and then decided how these people really should be instead of how they actually are. There are no noble savages here but there are some decent people.

Bihyeh has written his characters as varied and as flawed as actual humans. This naturalness quickly immerses the reader into this world and makes us give a damn about the characters. This also makes it heart-wrenching when the subtle horrors of Navajo magic begin to take their toll.

What did you love best about Coyote Tales?

I have heard Bihyeh's work on a podcast and was really excited to see he had finally put out a collection. It is similar to some of Stephen King's horror, but with Navajo folklore. A great listen!

Yes. If you enjoy a a blend of fantasy, terror, Native American folklore and well written characters. This book flows from one story to the next with a connecting thread flowing
through all of them. That with the combination of a skilled reader makes this a credit worthy
listen.

What other book might you compare Coyote Tales to and why?

I can see many influences the author drew from. Stephen King, Neil Gaimen and many others. The stories themselves are unique and rich in detail and atmosphere.

What does Cayenne Chris Conroy bring to the story that you wouldn’t experience if you just read the book?

I felt he was very skillful at finding a proper voice for the characters and pacing for the stories themselves. He read a little fast at the start, but then slowed down. That worked much better. I look forward to more of his work.

If you could rename Coyote Tales, what would you call it?

After finishing the book the title works perfectly. I sensed a sequel and will look forward to it.

A perfect blend of the modern and traditional

Coyote Tales puts a fresh, modern twist on the traditional Diné stories I grew up with, while at the same time giving them the proper respect they deserve. It never comes across as cheesy. The voice acting was perfect. I only wish there were more books like this from this author.

I loved how the stories were all independent but yet wove together. If you enjoy Native American stories, I believe you will enjoy this book. I wouldn't call them horror stories in the traditional sense, I feel it would be better classified as fantasy and mystery .
The narration was superb; every character was alive . I am looking forward to another book from Mr. Bihyeh narrated by C C Conroy.

highly recommend for anyone looking for something new. a fascinating set us stories based on lesser known folklore.

A view of a society we don't often get to see

What made the experience of listening to Coyote Tales the most enjoyable?

I really enjoyed these first three stories as stand-alone pieces. Then, I listen to this as a whole and they weave a cohesive whole that is greater than the sum of its parts. Maybe they were adjusted slightly for the collection, but if they were I can’t find the seams. Every single story in this collection is worth your time. The creepy imagery in “Black Body” felt very resonant with King’s IT. I was pleasantly surprised by all the almost documentarian approach to uncomfortable and difficult situations (like abortion, parenthood, abuse, and euthanasia) without ever feeling didactic.

I love how these stories are linked but do not rely on one another. The setting is compelling and opens a window into a culture that is often overlooked. It is fully populated with a broad range of human beings who are interesting and complex and uniquely burdened.

I came to this collection via PseudoPod. If you want a sample of what to expect, check out the first three stories there.

What about Cayenne Chris Conroy’s performance did you like?

Cayenne Chris Conroy has done a bunch of awesome narrations at Pseudopod and his prior work encouraged me to check the whole collection out.

Coyote is a real jerk. He uses everyone for personal gain and chaos and sometimes they come out a little less worse for wear. But I can’t say he’s a monster. He’s easy to empathize with, to be angry with, and to fear.

One of the best audiobooks I've heard.

This is just a phenomenal collection. Jim Bihyeh's writing is immaculate, with some of the most nuanced and thoughtful character writing I've seen in a collection. Cayenne Chris Conroy's narration is just perfect, playful where it needs to be, eerie where it's called for, devastating in other places. I'm a huge fan of collections or novels that focus on small towns or communities and intertwining stories, and Coyote Tales just nails this approach in the most satisfying ways. By the end of the collection I felt like I'd both been taken on a journey, but also very much come to feel familiar with a place where very little usually changes. There's not a weak story among the bunch, and this is the first time I've finished an audiobook and already planned to listen to it again real soon, as these are tales very much designed to be appreciated in the retelling too, as is tradition. A wonderful collection of fiction, and a wonderful cultural artifact that serves as a wider commentary on the nature and importance of storytelling. A book I'd recommend to absolutely everyone.