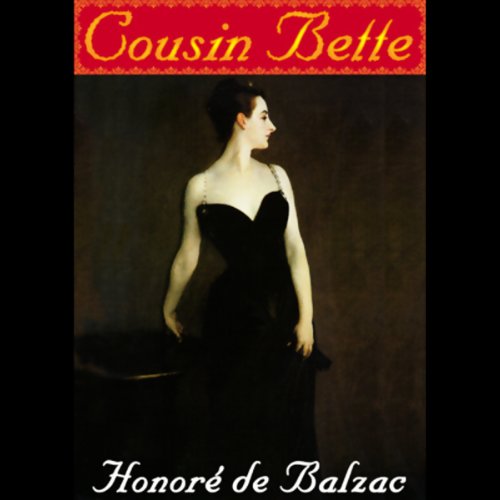 The Bette referred to in this magnificent novel's title is Lisbeth Fischer, an excruciatingly cunning poor relation who both depends upon and nurses a terrible grudge against the family of her beautiful cousin, Adeline. That family is slowly being ruined by the uncontrollable sexual appetites of Adeline's husband, Baron Hulot - appetites that will, in time, give Cousin Bette opportunity to exact her vengeance.

Balzac described Cousin Bette as one of his "scenes of Parisian life", and it is certainly that. It offers us a hypnotic vision of that infinitely varied city during the bright, vital, scandalous, and sexually untrammeled era of King Louis-Philippe. The courtesans, swindlers, bankers, artists, murderers, detectives, and saints populating this world pass before us invested with a verve and vividness unsurpassed in the history of the novel.

This is a delightful, witty, scathingly ironic novel of 18th century Paris. Joanna Ward raises it to even greater heights -- she is simply a wonderful narrator.

This book falls into the category of "can't put it down." I found it to be fascinating and captivating, all of the characters are rich. I found that I had to really listen and pay attention, especially in the beginning, but once I was hooked it was most rewarding. The narrator does an exceptional job. You will think about this story even when you are not listening to it.

A fine example of inspired professional writing. I read this book after it was mentioned in Prose's reading like a writer...and I was not disappointed. The style of writing is while florid, still engaging and accessible. The number of French clich?s is a delight to the student of language, but having a basic command of French and Paris will make the book all the more enjoying. I recommend this book as the audio backdrop for a 2 week vacation in Paris.

But, I warn the naive or moralistic that this book can be quite shocking...although never pornographic. Rich complex, although often cartoonish character studies.

Good emotional insights, and many tragic insights on the struggles of the un-attractive vs the favored and the transitory nature of both.

Johanna Ward is a suberb reader.

I loved this book. it was very modern despite being an old book. It actually reminded me alot of Anna Karinena I would recommend his book to any one. The narrator was excellent too.

A morale tale of greed, envy, and vice.

I don't know. Though it seems like a good topic roster to listen to, I had trouble staying interested at times. Maybe it was the reading.

Great story that feels immediate, even though the world has changed. People always want more sex, security and power. Universal.

Johanna Ward reads this book beautifully! She clearly has excellent control of both French and English and it shows! Thanks!

In the hundreds of books I have listened to, this is the second one that I could not finish. Poor narration and story combine to make it a waste of credits.

Would you listen to Cousin Bette again? Why?

I did listen twice because I could not keep the characters apart and the reader didn't change her voice enough to help me remember individual characters. After I got past that it was easier to listen to.

Actually, none of them since none were able to see their own problems let alone do anything about them.

In the beginning it was difficult to keep the characters apart.

I was a lot like a modern day soap opera.

It feels almost sacrilegious to be giving this book just 3 stars when for nigh on two centuries the great and the good of the literary world have been showering praise on it and its author! It’s about resentment and revenge, profligacy, grandiosity, shameful behaviour, avariciousness, vanity, male foolishness and libido. With all these sins on parade you’d expect the story to fairly bounce along, but for me it just dragged - rather a lot. How many times do we need a scene where a pretty woman entertains three men simultaneously, each one thinking he’s her only lover and unsuspecting of the others, to get the point that she’s an amoral scheming hussy and they’re conceited gullible fools? Yet permutations of this scene are played over and over again, and you long for some variation.
Balzac shines a light on the corruption, greed, idleness and lack of morality of certain members of the haute bourgeoisie and its imitators of mid 19th century Paris which is quite entertaining but, again, rather repetitive. The cast of characters is quite limited - we don’t get to see a whole panoply of people weaving their way in and out of the story - so misdeed after dastardly misdeed committed by just a few lose their impact. The social commentary (if that’s what it is) wears a bit thin when heaped on so few protagonists. The author shows very little in terms of landscape (except for interior furnishings) or context, so overall I found this novel to lack depth and breadth. The Catholic message which is ramped up towards the book’s end comes across as extremely contrived, especially as personified by the Baroness whose goodness and forgiveness are mindless, masochistic and bovine.
At times I found the slight ‘foreignness’ lingering in the translation to be a bit jarring. This is exacerbated by the narrator turning up the dial on a French accent with some of her characterisations. Johanna Ward has a very attractive voice with perfect diction but doesn’t add much variation between characters and does some rather odd things with rural or ‘working class’ ones! But she pronounces all French names and places beautifully and was a joy to listen to even if you had to replay from time to time to determine who was talking!

Interesting characters and great plot, however had to push through the middle but is a 19th century French soap opera!

Bette (also known as Lisbeth) is a spinster who dislikes her extended affluent family in Paris the Hulots. Bette is 42yr old and only receives interest from suitors due to her family connection with the successful Hulots. Bette resents this and harbours jealousy for the Hulot's daughter who is also seeking a husband and 'steals' Bette's love interest causing Bette to hate them all the more. Bette seeks vengeance via Baron Hector Hulot who is womaniser living beyond his means to lavish gifts on mistresses. Baron Hulot meets Bette's young pretty married friend Valerie and ends up having an affair. This works in Bette's favour to ruin the Hulots whilst Valerie simply enjoys the gifts and trinkets. I have probably said too much so will just say most meet their demise except one.. read the book to find out who has the HEA.

As the story unravels there is deceit, jealousy, rage and sexual passion. The book gives great insight into the bourgeois Paris society in the 1840s. I gave 3 stars because at some point in the book it felt like wading through treacle, rather than fluid free flowing, however it was worth persevering through. It is the first Balzac book i have read and with great plots and interesting characters i will probably read more in future.

Dumas is good.
Balzac was rubbish.
I have a degree in this. so believe me.

The best narration I have ever heard in an audiobook. Reflecting and maintaining the nuances as well as the stark differences between all characters such that they are recognised ‘on sight’ (and without becoming parodies) is a rare skill. The fact that it is married to the best work ever produced by Balzac (IMHO) made it a great experience for me.
As for the story…. If you thought Austen’s characters put money before love then the French beat them hands down. In conversations between characters, every new name is followed by “They have two / ten / twenty thousand a year”. It makes you wonder what (if any) benefit the country got from ridding itself of monarchy fifty years earlier, when the aristocracy and bourgeoisie remained so odious (and in control). Which I guess was Balzac’s point…

written by a man who loathes and has utter contempt for women. bette is a caricature of a woman with all the characteristics that men fear, none of them at all believable. dont read this book.

Beautifully narrated. 👏👏👏👏. Am an old fan of this work and very impressed with this translation and narration.

The narrator emphasised the wrong parts of sentences and paused in odd places, almost running out of breath at times. Shame as it’s a wonderful story.

I really enjoyed listening. Great characters, though it did take a little while to sort them all

I enjoyed this a great deal. A wonderfully interesting story about sexuality, morality and family in mid-19th C Paris. The characters were satisfyingly complex and were brought vividly to life by Balzac’s precise and perceptive prose, and by Johanna Ward’s pleasingly crisp narration.