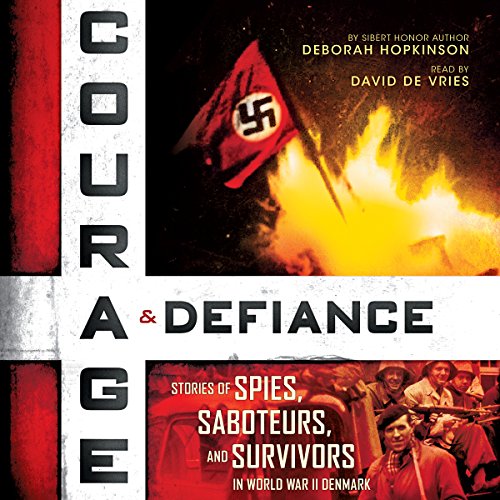 Critically acclaimed Sibert Honor author Deborah Hopkinson brings to bold life the remarkable story of the Danish resistance and rescue of over 7,000 Jews during WWII.

When the Nazis invaded Denmark the morning of Tuesday, April 9, 1940, the people of this tiny country to the north of Germany awoke to a devastating surprise. The government of Denmark surrendered quietly, and the Danes were ordered to go about their daily lives as if nothing had changed. But everything had changed.

Award-winning author Deborah Hopkinson traces the stories of the heroic young men and women who would not stand by as their country was occupied. Rather, they fought back. Some were spies passing tactical information to the British; some were saboteurs who aimed to hamper and impede Nazi operations in Denmark; and 95 percent of the Jewish population of Denmark were survivors, rescued by their fellow countrymen who had the courage and conscience that drove them to act.

With her extraordinary talent for digging deep in her research and weaving real voices into her narratives, Hopkinson reveals the thrilling truth behind one of WWII's most daring resistance movements.

Having served with members of the Danish/Swedish armed forces, this book was eye opening into the efforts the two nation's were doing away from the "main stages" of WWII.

Wow what a remarkable account of humanity standing up against tyranny. God bless everyone from the blessed country of Denmark that had any connection with these courageous men and women. My entire family enjoyed this story including our nine year old.

There are interesting stories here, but the prose seemed to be aimed at a young, unsophisticated audience. Being told that there was no email or even fax machines in WWII was a bit unnerving. But, with modest expectations, it is an ok listen.