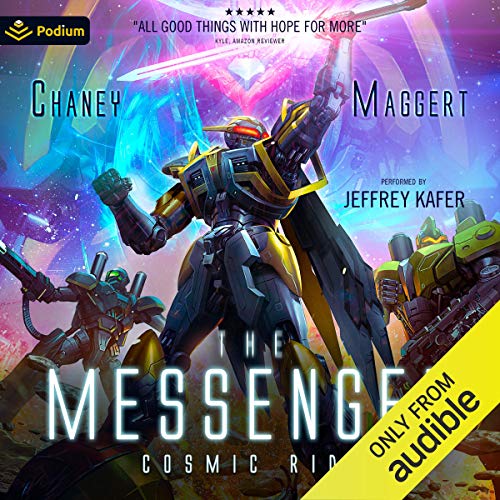 Across a gulf of shattered stars, the final battle is about to begin.

With the Realm advancing, Dash and his allies are faced with the full might of an enemy designed for one thing: to end all life.

As the ships of the Realm push through the Cradle, the Golden defenses grow tougher, revealing entire fleets of ships, Harbingers, and new, more lethal weapons arranged in an impenetrable field of fire. From mechs to carriers, Dash and his allies must save those who have been enslaved by Golden technology, all while bringing about a final cataclysm.

Even if he wins, Dash still has burning questions - and he’ll need answers from the only place that has them. The Unseen.

Experience the epic conclusion to the best-selling Messenger series. If you're a fan of Gundam, Renegade Star, or Mass Effect, you're sure to enjoy this epic saga of mechs, starships, and the ultimate war for survival.

Wow. Just. Wow. What a terrific ride. Thank you for the fantasies you have given me

Wow. Just. Wow. What a terrific ride. Thank you for the fantasies you have given me

Great ending to an amazing series!

This book was a great ending to an amazing series!
The series was consistent throughout the books, which can be difficult for a long running series but the authors did a great job.

So addicted to this series. Great story and even better characters! The performance is amazing , you feel like you are there.

this should be its own anime!

if you ever loved Gundam and_or the game mass effect... this story with good voice actors and great animation would be at worst amazing! my caveat is that you only get 6 to 9 hours per credit... my suggestion for the future is to make a 2 book sale per credit. its a great story but I'm well enough in to say screw it... GREAT STORY AND NARRATIONS! I have 300 books in my library, this story is done well, almost like drug

Dash is always off in his head while the battle and circumstances require his full attention. Many times I shouted WAKE UP YOU FOOL, or RUN!!!! This story elicits the most reaction from me. It is exciting, and always provides the problems and solutions by the skin of their teeth. I have been binge listening, and want more!!! Great series. I love Cheney's Renegade Star series as well.

totally loved the series. I couldn't put it down and looked forward to every morning to start listening to it.

Very good book in the series

The southern and eastern forges names were sometimes switched, other than that, I Really Enjoyed this book.

I could not stop listening to the books in this series. The story, the characters, the narration - all top notch!! The growth of the characters from book to book was very well done! The introduction of new characters into the story line was also done with logic, need, and expansion of the plot. Chaney and Maggert told a great story, and Jeffrey Kafer brought it to life. The ending of this book, and the first end to the series, did leave room to continue . . . . and they have done so, which is great!!

My only criticism of the series is that some of the books were too short. I felt they could have added some meat/explanation to the story, but it wasn't a distraction. You sometimes just had to pay attention that things were getting done in the story, but were passed over in a sentence or two as opposed to being the plot of the entire story - and that is not necessarily a bad thing!

I would highly recommend this series to anyone - and I have over and over!!

I must say at the start of this series I did not know it would transport me to this great point. The story is outstanding series that span the complete series of books. If I had the opportunity to send someone with my kids I would love to listen to it with my kids. Us save this book series my archives for my kids to listen to me when they get older.

Loved it and the narrator was a very good story teller and I felt like I was part of the story.

Love The whole series. DASH RULES!!! I love the story, I love the narrator. It is a great series.

Having read all the books in this seres so far, I have been gripped by the characters and laughed and cried with them. I just want it to go on longer😀.